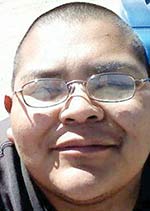 Herbert was born Nov. 27, 1931, at the Rehoboth Hospital in Rehoboth, New Mexico, into the Kiyaa’áanii (Towering House Clan), born for Naasht’ézhí Táchii’nii (Zuni/Red Running Into the Water People Clan). He passed away May 9, 2020, in Albuquerque.

JEDDITO, Ariz. — Graveside service for Lena T. James, 73, of Jeddito, Arizona, will be held today, May 14, at 10 a.m. at the Jeddito cemetery with Aderbert Edgewater officiating.

Lena attended a five-year special school in Santa Fe, and was a homemaker.

Lena is preceded in death by her husband, Howard James.

A reception will take place at the family residence, located 16 miles northeast of the Jeddito Chapter House, following service.

GALLUP — Graveside service for Evelyn A. Alexius, of Mexican Springs, New Mexico, was held May 13 at the Gallup City Cemetery.

After attending nursing school, Evelyn moved to the San Francisco Bay Area with her husband Jimmie Alexius. She worked for over 30 years as a licensed vocational nurse at Seton Medical Center in Daly City, California.

Upon retirement, Evelyn and her husband moved to Gallup in 2000.

In lieu of a donation, a moment of silence was requested on the day and time of her service to remember her as a loving mother, sister, auntie, and friend.

A memorial service will be held at a later date due to current circumstances.