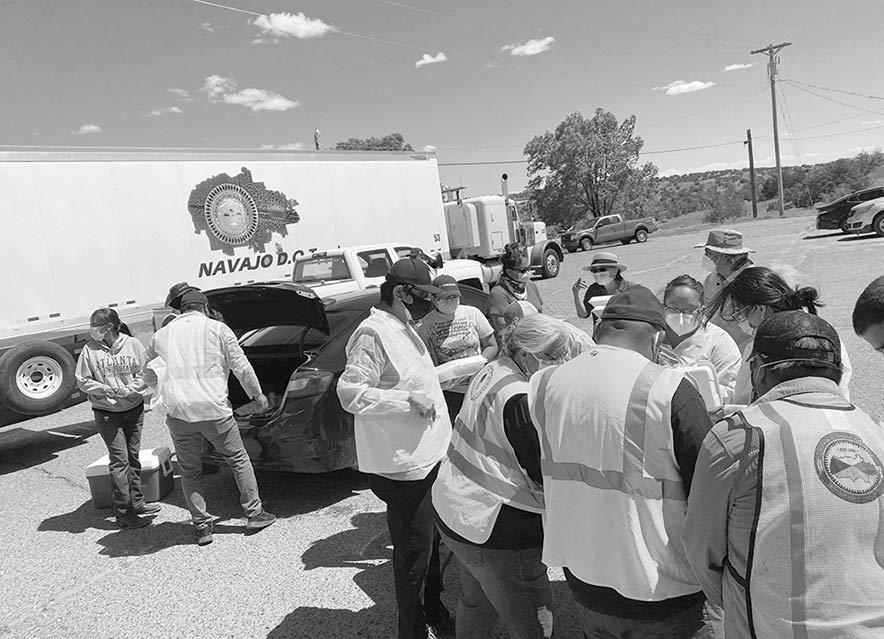 Vernita S. Tsosie dreams that one day her community of Wide Ruins will get the luxury of running water. At a two-mile radius from the Wide Ruins Chapter House is where the running water stops. The water line project the chapter has been wanting, which will get water lines to over 260 homes, will cost $5.1 million.

“The water line is much needed for the health and safety,” said Tsosie, “(and) for proper sanitation and domestic use. It’s kind of hard with this pandemic going around right now. A lot don’t have running water for sanitation.”

Tsosie is the chapter’s community service coordinator, and upon letting President Jonathan Nez know about this need from the community, Tsosie said Nez told her getting water to communities is a priority for fighting the pandemic — and with $600 million in federal funds now in the bank earmarked for COVID-19 mitigation, Wide Ruins may finally get its wish.

The Nation has to spend the funds by Dec. 30. The dollars, received last week, have illuminated the divisiveness between the Navajo Nation Council and the Nez/Lizer administration, especially after Council promptly dropped a bill that Nez said is similar to legislation appropriating the $554 million lawsuit settlement received in 2014 — what is now the Sihasin Fund.

While out in the communities visiting residents and delivering donations and supplies, Nez said getting running water is an obvious need for maintaining cleanliness. “Thirty-plus percent — and this in fact, this isn’t poverty,” said Nez. “Thirty percent-plus of our Navajo people don’t have running water. We need to get water to our citizens in case of another bug, pandemic, for the future.”

Although the intent of the Coronavirus Aid, Relief and Economic Security Act is for the funds to go toward immediate needs for COVID-19 responses, Nez explained it should go toward necessities that will help curb future outbreaks. Epidemiologists have warned of another outbreak in the fall or winter. “COVID-19 does not have a cure,” said Nez. “Scientists and experts are predicting another wave in the winter. How do we prepare for that? You got the feds and everyone saying, ‘Wash your hands.’ But our people are still hauling water. Here is a great way to get running water for our people.”

When the Navajo Nation received the $554 million — the largest settlement received by a tribe from the federal government — public hearings ensued on how to spend these dollars. Waterline projects were a priority the Navajo people voiced to the lawmakers at the time.

“The idea here is we have over $300 million of projects that were identified through the SIhasin Fund for all chapters on the Navajo Nation,” said Nez during Tuesday’s town hall. “Those projects have already been vetted and moving forward, and all we need to do is draw down the dollars from the CARES Act to get these water line project for the Navajo Nation.”

But where will the dollars actually go? That decision will be the responsibility of the Council. While Nez called the Council’s current bill “unworkable” and “general,” Speaker Seth Damon stated the language of the bill is an exact copy of the federal restrictions on the CARES Act funding. The Council holds the authority to decide the use of the funds through its power of appropriation, and besides running water, delegates are eyeing other COVID-related needs ranging from helping with burial expenses to beefing up the budgets of the Nation’s overtaxed domestic violence shelters.

The first stop for the bill, which Damon sponsored, was the Law and Order Committee, which approved it 3-0 on Wednesday. “This builds the parameters of what you can and cannot do,” Damon explained to the LOC. “What we are doing is setting up the fund management.” It will now head to Budget and Finance this morning, and then Naabik’iyati’ later on in the afternoon.

Until the branches come together on how to spend these dollars, Tsosie continues to hope some will go toward running water for her community. “It’s the younger ones, the grandchildren,” said Tsosie of why she’s pushing for a water line. “Sanitation is very important to them, especially during this time.”