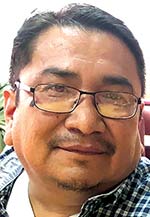 James was born June 11, 1972, to James Woody Sr. and Alice Hat in Albuquerque, into the Hashk’aa hadzohí (Yucca Fruit-Strung-Out-In-A-Line Clan), born for Kinlichii’nii (Red House People Clan). His nali is Tódich’ii’nii (Bitter Water); chei is Hashtl’ishnii (Mud). He was called home to our Lord on May 7, 2019, in Largo, Florida.

James referred to himself as a “naughty” child. He insisted this wasn’t his fault. He believed he was mischievous because while pregnant with him, his mother went into labor at the zoo while watching some mischievous monkeys. However, to all who knew him, he was a unique and caring individual who touched the lives of all those who knew him.

James’ friends and family suspect God called him home early for different reasons. His lifelong friend believes he passed away at such an early age to “avoid having to take salsa dancing lessons and Zumba” with the love of his life. Although James had two left feet, none of the Floridians at the Sauce could outdance the 46-year-old Native New Mexican boot scootin,’ two-stepping, line-dancing cowboy. He even wowed them all with his off-key karaoking to George Strait’s “Troubador.”

James was a man of few words but many talents: a master welder of 15 years, a country line- and two-step dancing fanatic, an excellent amateur chef who could make the most mouth-watering Spam with roasted green chili and frybread, and a dedicated volunteer at Pinellas Hope who utilized his carpentry and welding skills to help renovate two shelters for individuals struggling with homelessness.

James loved everything country … horses, trucks, beer (maybe not in that order) and not just any old truck, it has to be a Chevy. Born in Albuquerque, James spent most of his life in different small areas on the Navajo Reservation. He was raised by his grandparents in Red Mesa, Arizona, and later attended Farmington High School.

He left for Oklahoma at 21 to hone his welding skills and to secure a trade that would later help him build a long-term career. In his late 20s, James left for the “big” city in Phoenix, to explore a “more fun and interesting” life. He discovered that the person (he) was the factor in making life more fun and interesting, not the location.

In 2016, James relocated to Largo, to start a new life with his longtime friend and love of 25 years. There he played a critical role in transforming his new workplace into a safer work environment through his recommendations for a more advanced ventilation system for his welding crew.

James leaves his friends and family with this: “Please don’t cry because I’m gone. Be happy that I was on earth to share loving, fun and funny moments with you. Cherish those memories.” 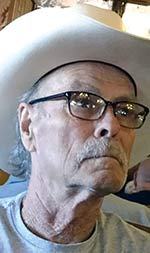 AVONDALE, Ariz. — A memorial service for Richard Allan Slider, 80, was held May 18.

Richard was born in Port Huron, Michigan, and grew up in the surrounding areas, moving to Tuba City in 1971. He passed away May 8, 2019, at the West Valley Hospital in Avondale, Arizona.

Richard provided the community with fresh produce and eventually bought/traded horses and livestock.

In the early 1990s, he went back into the concrete trade, which took him across the United States, where he made many friends and continued to earn his living. He was a hard worker and took pride in all he did.

In retirement, Richard began the hobby of collecting classic cars that took him to many car shows. His favorite being Hot August Nights in Reno, Nevada.

Richard never met a stranger in all of his travels and will be dearly missed.

Richard is preceded in death by his father, Paul D. Slider; mother, Beulah B. Slider; and sister, Margaret Haynes-Spencer.

ROUND CEDAR, Ariz. – Graveside service for Irene Riggs Tsaipi, 71, of Round Cedar, Arizona, will be held Friday, May 24, at 10 a.m. (MST) at the Round Cedar Cemetery.

Irene was born into the Naakai dine’é (Mexican Clan), born for Tl’ízílání (Many Goats Clan).

Greer’s Mortuary of Winslow is in charge of arrangements.

Condolences can be sent to www.greersmortuary.com.

RIM ROCK, N.M. — Funeral services for Helen Stewart Bennett, 68, of Sawmill, Arizona, will be held Friday, May 24, at 9 a.m. at the Bread of Life Baptist Church in Rim Rock, New Mexico, with Brother Russ and Brother Nicklay officiating. Burial will follow in Fort Defiance.

Helen was born April 22, 1951, in Fort Defiance, into the Tódík’ózhí (Salt Water Clan), born for Táchii’nii (Red Running Into the Water People Clan). She passed away May 10, 2019, in Oak Springs, Arizona. Helen loved spending time with her children and grandchildren. Helen is survived by her sons, Raymond Lee and Eric Bennett; daughters, Rachelle Brown and Michelle Bennett; and sisters, Rose Wauneka and Nora Stewart.

GALLUP — Funeral services for Dennis Lincoln Sr., 84, were held May 18 at Rollie Mortuary in Gallup. Interment followed at the Gallup City Cemetery.

Dennis made Navajo arts and crafts, and was a silversmith, mechanic and carpenter. He enjoyed spending time with his wife, children, grandchildren and great-grandchildren.

Dennis is survived by his wife, Alice Lincoln; daughters, Jacqueline Silver and Judith Dixon; and 14 grandchildren and 16 great-grandchildren.

Dennis is preceded in death by his sons, Dennis Lincoln Jr., Duane Lincoln and Vincent Lincoln.

WINDOW ROCK — Funeral services for Johnson Smith, 52, of Window Rock, will be held Friday, May 24, at 10 a.m. at the United Methodist Church in Window Rock, with Rev. Roger Tsosie officiating. Burial will follow in St. Michaels, Arizona.

Johnson was a motorcycle enthusiast/rider, musician, drummer and guitar player for church. He enjoyed writing poems on experience and life, and watching his favorite NFL team, the Dallas Cowboys, play.

Johnson is preceded in death by his parents, Lida and John Smith; sister, Eva Smith; and brother, Jason Smith.