NN Museum to get own copy of 1868 treaty

“I’ve asked around, even asked the National Archives, and I can’t find a single other tribe that has their treaty,” said Navajo Nation Museum Director Manuelito Wheeler, “which is kind of interesting.” 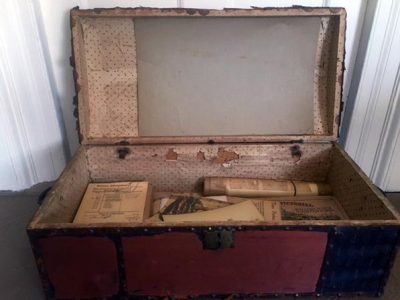 Submitted | C.P. Weaver
The third copy of the Treaty of 1868 was in a trunk like this one in the attic of a home once owned by Col. Samuel F. Tappan, one of the drafters of the treaty. If all goes as planned, it will be donated to the Navajo Nation May 29.

The third original copy of the Treaty of 1868, long believed to be missing, turned up last year — its 150th anniversary — in the possession of the great-grandniece of Col. Samuel F. Tappan, a member of the Indian Peace Commission who helped draft it.

Actually, the treaty’s owner, C.P. “Kitty” Weaver, revealed in an interview with the Navajo Times that the family had known about the treaty since the 1970s, but “didn’t know people thought it was missing.”

Anyway, Weaver has agreed to donate the copy to the Navajo Tribe. Since it’s a gift, it has to be accepted through legislation, which was introduced last week by Navajo Nation Council delegates Otto Tso and Herman Daniels. It should be voted on Thursday, but it hasn’t faced any opposition.

Weaver is scheduled to arrive late on May 28 and on May 29 the museum will hold a press conference to unveil the treaty and officially accept it.

Wheeler said Weaver’s only condition for the gift is that it be handled with the same strict standards that the National Archives uses to protect documents in terms of exposure to light, humidity and the public.

It will be on display June 1 through 7, the 151st anniversary of its signing. After that, “we have some exciting programming coming up that has never been done before that involves working with schools and chapter houses,” Wheeler said, declining to elaborate further.

Last year, in honor of the treaty’s sesquicentennial, another original copy of the treaty was brought to the Navajo Nation for a limited period of display. The response was “through the roof,” according to Wheeler.

According to historical accounts, there were three copies made of the treaty. The one displayed last year is at the National Archives, there’s Weaver’s copy, and the third is believed to have been buried with Barboncito, one of the Navajo headmen who signed it.