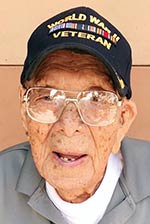 SCOTTSDALE, Ariz. — Funeral services for Sam Little will be held today, Jan. 11, at the Papago Ward of the Church of Jesus of Latter-Day Saints on the Salt River Reservation (1816 N. Extension Rd.) in Scottsdale, Arizona. Burial will follow at the National Memorial Cemetery of Arizona (23029 N. Cave Creek Rd.) in Phoenix.

Sam was born into the Tódích’íi’nii (Bitter Water Clan) on the Navajo Reservation near Cow Springs, Arizona. His official records indicate a birth on Dec. 31, 1920, however his real age remains a mystery as no records were kept at that time. He passed away peacefully on Jan. 3, 2018.

Later in life Sam learned that he was born in a year when people were “falling off their horses and dying,” and during a time when “the corn was four feet high.” The family estimates that this was September 1918 during a flu epidemic on the reservation but Sam remembers being around four years old at this time.

Sam attended New Mexico Highlands University when Pearl Harbor was attacked in 1941. He enlisted in the U.S. Navy soon after he completed his sophomore year of college. After completing basic training he was promoted to seaman second class, and then promoted again to second class petty officer and transferred to the USS General Morton, a personnel transport ship to do duty in the Pacific Fleet in wartime.

Sam was honorably discharged on Dec. 22, 1945, and returned to New Mexico where he married his high school sweetheart, Catherine Mary Mildred Tsotsie, and completed his college degree. He taught briefly at the Phoenix Indian School in 1948 but quickly became disenchanted with the poor treatment he received and re-enlisted in the U.S. Navy in August 1948.

Sam served honorably in the U.S. Navy for over 25 years with deployments to California, Maryland, Japan and Antarctica. He participated in World War II, Korean War, Vietnam War and took a vital part in Operation Deep Freeze out of Washington, D.C., deploying semi-annually to the Antarctic continent, and a secret mission named the Red Ball Operation testing nuclear atomic bombs.

Sam was also aboard the USS Hornet and participated in recovery efforts when the Apollo 11 mission to the moon landed in the Pacific Ocean. He retired from the U.S. Navy on Nov. 1, 1974.

On Dec. 1, 2014, Sam was recognized for 60 years of continuous membership and loyalty, protection and service to fellow shipmates of the Fleet Reserve Association. He is the first and only member of FRA branch 163 to receive this honor. Members of the FRA came to Fort McDowell, Arizona, on Sept. 1, 2015, to present the award.

Sam was baptized in the Church of Jesus Christ of Latter-Day Saints in 1976 and later served as bishop in Tuba City, as a stake patriarch, and a temple worker. His service affected the lives of hundreds of people. He was greatly respected for his faith in the gospel for his love of all God’s children.

Sam will always be remembered as having a deep love for his family, faith in the gospel of Latter Day Saints, a profound respect of the value of education and dedication to his service in the military. He was a husband, father, grandfather, farmer, teacher, military officer, and above all, loved by his family, and his spirit will live in perpetuity with those who were touched by his life. 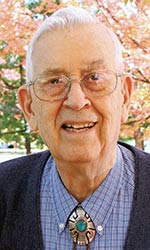 David was a servant of Christ, who devoted his life to spreading the gospel, first as a pastor then as a missionary on the Navajo Reservation.

Memorial gifts can be sent to: Indian Bible College of Northern Arizona or the Christian Discipleship Center of Cortez, Colorado.

ST. MICHAELS, Ariz. — Funeral services for Denny Bia, 82, of Kinlichee, Arizona, will be held Friday, Jan. 12, at 10 a.m. at the St. Michaels Catholic Church in St. Michaels, Arizona, with Father Joseph officiating. Burial will follow at the Kinlichee community cemetery.

Denny attended Intermountain Indian School in 1955 and was employed at Marquardt as a machinist and facilities/maintenance engineer. He enjoyed horses and livestock and was a member of the Native American Church.

Denny is preceded in death by his parents, Joe and Alela Bia; daughter, Dorathea George; granddaughter, Ashlyn George; and brothers and sisters.

Honorary pallbearers will be Ellard Bia and James McBryde.

A reception will take place at the Kinlichee Chapter House following services.

Tse Bonito Mortuary is in charge of arrangements.

Herbert studied at Eastern Arizona College in Thatcher, Arizona, from 1978 to 1980 and earned an associate’s degree in middle management where he participated in college activities and societies, including the Intertribal Club, Rodeo Club and Talent Exhibition. He also attended Arizona State University in Phoenix.

Herbert was a self-employed silversmith and sold his crafts on his Internet/website business. He was co-owner of Eagle Nest Trading Company for 25 years working with wholesale Native American jewelry in Texas and Oklahoma as he traveled the country. He won at a number of silversmith art shows across the country. He had a lifelong companion and business partner, Patty Grieves, from Michigan.

Herbert spent 40 years away from the Navajo Reservation. His hobbies included rodeo, ranch-hand duties and riding horses. He was also a member of the Native American Church and was a roadman with the east coast tribes.

Herbert is survived by his son, Reyburn Joe of Phoenix; 12 siblings and two grandchildren.

A reception will take place at the Tolikan Chapter House following services at 1 p.m.

Memorial donations may be made to the Herbert Joe Memorial Fund at any Wells Fargo location nationwide.

Herbert is in the care of Desert View Funeral Home in Shiprock.

Grace loved to go to rodeos, powwows and gourd dances. She also liked to work on puzzles and crossword puzzles.

Dennis received his elementary education in Iowa and Illinois. He served in the Army stationed in Korea during the Korean War.

Dennis was a ferrier and horse trainer throughout his life. During the past 35 years he resided in Tse Bonito, New Mexico. He loved rodeos, stock auctions, horse sales and watching horse races.

Dennis is survived by his son, Forrest KnightenGale Martin of Lander, Wyoming; daughter Gailene of Lander; and five grandchildren.

Dennis is preceded in death by his parents, Ambrose and Sina Phillips; and son, Dennis A. Phillips.

Tse Bonito Mortuary is in charge of arrangements.

Darlene is preceded in death by her parents, Madeline B. and Herbert Tso; husband, Leonard B. Kenneth; sister, Mildred Manuelito; and granddaughter, Skye E. Whitecalf.