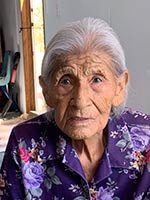 Graveside service for Mary Ann Yazzie, 96, will be held Wednesday, May 13, at Cope Memorial in Kirtland, New Mexico. Viewing will take place from 8 a.m. to 9 a.m., followed by a prayer given by her grandson, Brent Sells, at Memory Gardens at 9:30 a.m.

Mary was born July 27, 1923, on the Navajo Reservation in Newcomb, New Mexico. Her maternal clans she was born for were Ta’neeszahnii (Tangle Clan) and Tł’ááshchí’í (Red Bottom People Clan), while she was born to Naashashí (Bear People Clan) on her paternal side. She passed May 2, 2020, from COVID-19 while in residence at the Life Care Center of Farmington, in Farmington, New Mexico, where she became a resident in December 2019.

Mary attended Toadlena Indian Boarding School then found work in her early years as a line cook and dishwasher in a restaurant, as a maid in a hotel, and in a laundry where she trained new employees.

Mary said she was always self-conscious about a scar she received on her hand after someone she was training at the laundry accidentally burned it by activating a clothes press, but none of her children or grandchildren were even aware of it until she talked about it in her 80s.

Mary wasn’t the first person in her family to work an eclectic mix of off-reservation jobs. Her father, fluent in Navajo, English and even some Spanish, for a time was a police officer, a horse trainer and jockey, a school master, and even recruited other Navajos for Hollywood movies.

During World War II, Mary lived in Salt Lake City, Utah, and commuted everyday to Idaho where she contributed to the war effort like Rosie the Riveter, producing nuts and bolts, loading them into boxes, and shipping them to Germany.

One day Mary heard a man speaking Navajo, so she walked around the corner to see who it was and that’s how she met her husband Paul, who was 10 years older than she and was from Immanuel Mission, Arizona.

Mary had once said that her mother, Mamie, warned her not to get involved with extremely handsome men. Perhaps that is why, she mused, her marriage ended in a separation some years after the war ended.

Paul had returned injured and was awarded a Purple Heart while Mary worked in Farmington, to make money to take care of her children while living with grandparents, aunts, and uncles on the reservation during the 1950s and 1960s.

Mary had eight children; one passed as an infant, Virgil, and Freddie, a graduate of the Institute of American Indian Arts, Vietnam veteran, freshman at Arizona State, and one time member of Up With People, who passed in 1970.

In the 1990s, after her daughter Caroline won a radio contest, Mary took her first airplane ride to finally meet Freddie’s son, Eddie, who was living in Chicago.

Mary loved watching basketball, especially the Lakers, on the flat screen from son Larry, and the whole family would help supply her with Word Search books and pens. She caught the bouquet at her eldest granddaughter Teresa’s wedding and was fond of sweets so her second eldest granddaughter, Saundra, would treat her to Dairy Queen and her daughter Elaine made sure her green Formica table always had a treat or two sitting there daily.

Mary’s son Gary and his wife Edda would supply Filipino eggrolls and daughter Jeannette and husband Lawrence would drive up from Albuquerque, to take Mary to doctor’s appointments while her youngest son Gilbert would fix the fussy air conditioner or heater on his visits.

Mary was the matriarch of a family who believed she would most likely have stayed with them through the traditional Navajo lifespan of 102 years. She was physically strong, only took medication for blood pressure and the occasional steroid shot for arthritis in her knee and shoulder.

Mary was born to parents who were raised by parents who had lived through the Navajo Long Walk to Fort Sumner. This must have been a reason why she had such a strong sense of self; she had so many stories about standing up for what she believed in and fighting for her own happiness and good health while never letting hard times define her character nor ever seeing herself as a victim. She was the healthiest grandma around.

When grandchildren would visit, Mary always asked about their brothers and sisters and told them how much she loved them and missed seeing them. They moved the dial further by becoming a journalist, working in magazine publishing and real-estate, forming heavy metal rock bands, opening a computer repair shop, becoming a CIA trained chef, managing and fighting forest fires, becoming a buyer, printmaker, house refurbisher, and playwright/filmmaker, so far.

Mary was the constant presence behind an entire family who will miss her deeply. She was the keeper of the continuity of the family, and especially for those who lived away from the four sacred mountain boundaries of the Navajo Nation, she was the heart of our source of culture, identity, and long history.

Pallbearers will be grandsons, Terry Sells and Brent Sells.

A reception will be held at a later date.