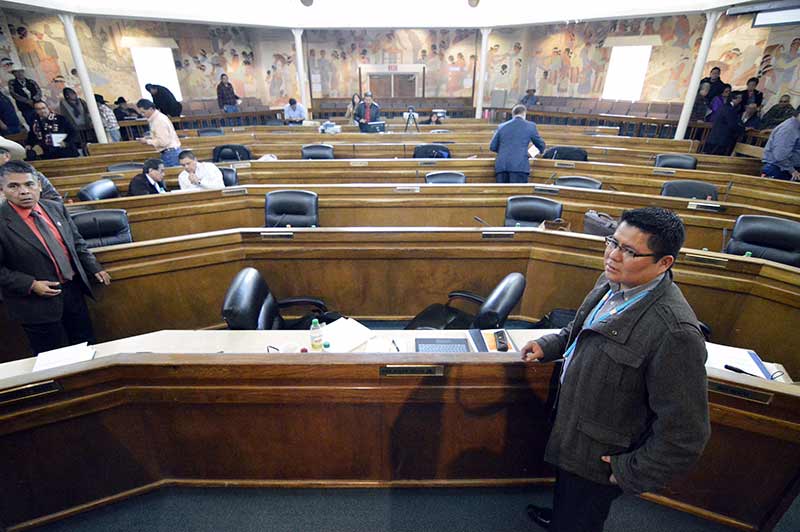 Council Delegate Nathaniel Brown, right, and fellow colleague Kee Allen Begay, left, get ready to leave the Navajo Nation Council Chamber at the adjournment of the winter session on Thursday, Jan. 30, 2015, in Window Rock. The next regular session is scheduled for April. (Times photo - Donovan Quintero)

Navajo Nation President Ben Shelly received the blessings of the 23rd Navajo Nation Council Thursday via a bill that supports him as interim president.

The Navajo Election Administration hasn’t scheduled an official date for the election for the tribe’s highest office.

“There was no actual legislation anywhere that said, ‘This is what’s going to happen,’” said Council Delegate Seth Damon ( Bááháálí/ Chichiltah/Manuelito/Rock Springs/Tsayatoh/Tsé Lichíí) , who sponsored the bill.

Damon, who was among 12 members of the council that signed the agreement with Shelly last Saturday, added that this bill includes the votes of other members that were not available then.
On Jan. 9, three delegates negotiated with Shelly to extend his presidency, and on Jan. 24 there were only 12 of them.

What’s more, Damon said that an agreement is simply an agreement that can be undone and that this bill legitimately supports it.

“Anyone can back away from an agreement,” he said, before adding, “We needed something else to get the government functioning in this turmoil.”

In response to Damon’s bill, Deswood Tome, special aide to Shelly, said that Shelly’s negotiations in the Jan. 9 and Jan. 24 agreements were executed in “good faith.”

The Council had been in recess for two days to address the New Mexico Gaming Compact with state lawmakers in Santa Fe, before they took action on Damon’s bill Thursday.

Directive to use Permanent Trust Fund for roads

In addition to passing Damon’s bill, the council issued a directive to the Office of the Speaker to begin the process of developing a referendum for road construction and road improvement projects using the Permanent Trust Fund.

Dubbed the Transportation Stimulus Act by Council Delegate Dwight Witherspoon ( Black Mesa/Forest Lake/Hard Rock/Pinon/ Whippoorwill) , it would use the principal interest from the Permanent Trust Fund.

The proposed act would have a “multiplier effect” on the Navajo Nation’s economy, said fellow member Tom Chee (Shiprock).

Other members of the council, except for Council delegate Leonard Tsosie (Baca-Prewitt/Casamero Lake/Counselor/ Littlewater/Ojo Encino/Pueblo Pintado/Torreon/Whitehorse Lake) , argued that new roads lead to job creation and improved standard of life when it comes to emergencies, businesses and other economic possibilities.

Tsosie had urged his colleagues to sponsor a legislation, which he said is stronger than a directive. He recommended the legislative process, just like the 22nd Council did with compromise to fund veteran’s housing currently being constructed.

“I don’t deny roads and housing is important,” Tsosie said, “but I think there is a better way to do this.”

“Maybe there are other avenues, but this is a need for our people,” added Council Delegate Jonathan Perry (Becenti/Lake Valley/ Nahodishgish/Standing Rock/Whiterock/Huerfano/ Nageezi/Crownpoint).

The Council voted 19-1 on the directive, with Tsosie being the lone dissenter.

Speaker LoRenzo Bates ( Nenahnezad/Newcomb/San Juan/ T’iistoh Sikaad/Tse’Daa’Kaan/Upper Fruitland) said that his office would also consider looking at some of the money from the $554 million settlement the tribe received from the U.S. government.

“If it leads into the settlement dollars is the approach we’ll look at as options,” Bates said.