Democrat Deb Haaland has won a second term in the U.S. House of Representatives (New Mexico District 1), earning 58% of the vote (185,196) over Republican challenger Michelle Garcia Holmes at 42% (133,695), as reported by the New Mexico Secretary of State Tuesday.

Haaland, from Laguna Pueblo, was one of the first two Native American women to be elected to Congress in 2018. 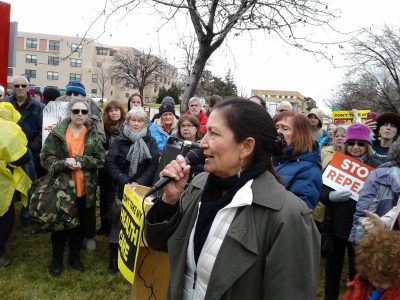 Courtesy of Deb Haaland campaign website. Haaland at a campaign rally in 2017.

“Tonight, the people of New Mexico have chosen hope over fear, love over hate, community over division, and I am so honored that New Mexicans have chosen me to serve in our nation’s 117th Congress,” said Haaland in an announcement from her campaign page.

Haaland has been a vocal critic of the policies of President Donald Trump and a strong advocate for protecting the environment and promoting social equity.

She has also fought hard to put forth policies to protect and seek justice for missing and murdered Indigenous women.

“The potential to enact historic change is right in front of us,” said Haaland. “Tonight, I recommit to fighting for legislation that will guide our nation forward in the areas of climate change, education, racial equality, healthcare and economic justice. Thank you, New Mexico!”

“More people voted in this election than in any other time in our state’s history,” Lujan said in his election night victory remarks. “You inspired people to get out to the polls.”

Lujan will succeed retiring Democratic U.S. Sen. Tom Udall, who has been a stalwart advocate for Indian Country in general and Navajo in particular throughout his distinguished career.

In a press conference on Tuesday afternoon, Lujan said he began Election Day with a blessing from his mother, Carmen Lujan, whom he refers to as his “guardian angel” who always advises him to do good work for all the people of New Mexico.

“We were raised to treat people with respect and dignity,” said Lujan. “These are our shared New Mexico values that I carry with me every day.”

“Every child born in New Mexico should have a bright future ahead of them,” Lujan states on his campaign website. “In Congress, I’ve been proud to support policies that strengthen unions, increase production in our renewable energy sector, and invest in New Mexico’s national labs and bases.”

As a staunch advocate of campaign finance reform, Lujan has refused to accept corporate political action committee money for his U.S. Senate campaign.

Lujan said while this year’s campaign has been different because of COVID-19, and he misses being able to travel New Mexico and visit with constituents, he was spending election eve at home on the farm her grew up on in Nambe, close to family.

In considering his run for the U.S. Senate, Lujan also said he’s been reflecting a lot on the legacy and influence of leaders like his father, the late Ben Lujan, an ironworker who was a long-time member of the New Mexico House of Representatives.

“They inspired generations and knew how to bring people together, because they looked at problems, but found solutions and a way to face adversities in our lives,” said Lujan.

As a senator, Lujan said he plans to advocate for New Mexicans who have suffered greatly from the impacts of the coronavirus pandemic, including pushing for additional relief in a second stimulus package.

“I know times have been tough, and I know you have challenges — I hear you and I see you,” said Lujan. “As your United States senator, I will not stop fighting to get all the help that we need to rebuild and recover from this pandemic.”

In other New Mexico races, Democratic incumbent Xochitl Torres Small was defeated with 46% (120,766) of the vote in District 2 by Republican challenger Yvette Herrell with 54% (141,227).

T. Ryan Lane, who ran unopposed, held on to his seat in the State House of Representatives in District 3.

Diné Democratic incumbent Anthony Allison also retained his seat as State Representative in District 4 with 54% of the votes (5,961) over Republican challenger Mark Duncan with 46% (5,034).