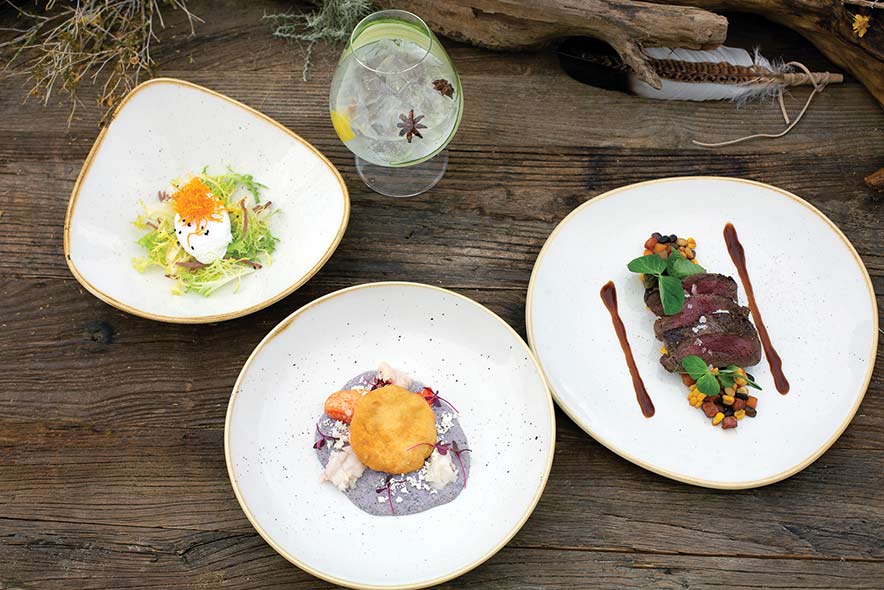 Special to the Times | Krista Allen
The cuisine of Chef Anthony Marazita uses a variety of additions from Native culture, such as beans, squash and cholla buds.

And the fourth course is dessert, which is 60-day corn cheesecake or dah diníilghaazh with vanilla bean ice cream.

Spirit of the Journey is a carefully crafted, four-course menu. Each course comes with a story, said Marazita, who is Tooh Dine’é.

“The first course we call ‘K’os,’ which translates into ‘flight’ and that’s the salad, that represents a bird’s nest,” Marazita explained. “We have a second course … which is that blue corn dish. And then we have a dish called ‘Dzééh Kayenta,’ which is elk.

“We play off of the Native (American) beans, cholla buds, stuff like that,” he said, “really pay homage to local ingredients and support the local farms.”

Marazita’s day begins every morning around 8 a.m. He meets with Amangiri’s – one of Switzerland-based Aman Resort’s 34 luxury destinations – department heads and goes over the day ahead. They discuss incoming guests, dietary preferences and the special requests the guests may have, and upcoming special occasions.

Then the team comes up with a game plan to take on the day and the night and then breaks for work.

Marazita observes the breakfast, lunch and dinner services and keeps up on the ordering.

“You know, menu engineering, coming up with lunch specials, special requests from guests,” Marazita said. “For example, if someone comes in on a private jet, they want to do their own thing and say they want sushi or something. For the most part, it’s kind of just generally touching all the meal periods of the day, talking to guests. We’re super chef-driven out here.”

Anthony Marazita has worked in some of the country’s best restaurants, including luxury establishments like the Palace Hotel, a Luxury Collection Hotel, in San Francisco and the Princeville Resort in Hawaii.

But Marazita started working at Amangiri in March 2017 after working at the Sheraton Grand at Wild Horse Pass in Phoenix, where he was an executive sous chef for more than six years.

“Surprisingly enough, I did not go to culinary school,” said Marazita, who is of Italian descent. “I was lucky enough as a child – my mom and my dad, they had a little coffee shops in my hometown. Little (greasy-spoon) breakfast and lunch places.”

Marazita said he worked in his parents’ coffee shops every day during his childhood in northern Nevada.

“Wake up, work in the restaurant, and then go to school,” he explained. “You walk home from school and then walk to the restaurant and help them close down. That was life growing up – the food business.”

He scored stages (pronounced “staahj,” meaning kitchen internships) in fine dining restaurants and in competitive kitchens around the Napa Valley wine region and San Francisco, working as a stagiaire during his teen years.

From there, he says, he got into luxury hotels and worked his way up through the kitchen ranks.

“When everyone was going home because they’re bringing in Indian chefs for a big Indian wedding, I’d definitely stick around because I wanted to learn as much as I can,” Marazita said. “It really helped me be super well rounded with so many styles.”

He added, “I was lucky enough to work in big hotels and resorts that did everything. It’s my advice that I give to a lot of young culinarians. If you’re a school (person), definitely go to school, if that works for you.

“But there’s this route too: On-the-job training and you got to be ready to work hard,” he said, “harder than you’ve ever had. Ever!”

Marazita one day received a call to check out Amangiri, a 600-acre sanctuary of wilderness and isolation, near Dá’deestł’in Hótsaa.

The vast canyons of the Utah desert and the nearby tribes are what caught Marazita’s interest.

So he accepted Amangiri’s offer to not only lead the kitchen but also to cook food that celebrated the Native American heritage, the Diné in particular, and making the Diné voice heard in a new way.

“I base all the menus off of the theme that I coin ‘Native American with global accent,’” Marazita explained. “So, I do a collaboration of five tribes throughout Arizona and southern Utah.”

“So I take a collaboration of all those tribes and I use a lot of their traditional ingredients, whether it’s blue corn, 60-day corn, tepary beans – different types of heirloom hominy,” Marazita explained. “And what we try to do is put a luxury twist on them.”

Some of the most luxurious foods are creations by top chefs like Marazita. And the “Blue Corn Polenta,” or Tóshchíín Polenta Dinék’ehjí, is one of those.

Marazita’s Navajo Blue Corn Polenta is infused with juniper ash (gad bit’eesh). He adds high-end ingredients such as lobster or black truffle – nature’s supreme luxuries prized for their delicate flavor – and local goat cheese to give the Tóshchíín Polenta an element of luxury while staying true to the Native tradition.

“It’s a real cool style of cooking,” Marazita explained, “which is unique because not a lot of people are doing it at this level. So we’re really proud of it.

Some of the ingredients Marazita uses are from either Ramona Farms in Sacaton, Arizona, where he gets blue corn, Native ga’ivsa, and tepary beans; or from the San Xavier Co-op Farm in Tucson, where he gets saguaro cactus seeds, saguaro syrup (bahidaj sitol), and cholla buds.

“It’s a big collaboration of that whole Three Sisters – the crops of corn, beans, and squash – and paying homage to that and showing people it’s not just corn, beans and squash,” Marazita explained. “It’s what we can do with those ingredients.”

Marazita said what inspired Native culture and traditions in the Amangiri kitchen is the Native people themselves and their survival and resilience.

“It’s definitely inspirational to me and how they made so much with what they had, with what was given to them,” Marazita said. “They still came up on top and survived and we (at Amangiri and at Aman Resorts) wanted to pay homage to them without a doubt. It’s pretty inspiring and it’d be the right thing to do.”

He added, “A lot of chefs can say their specialties are Italian, Hawaiian, whatever it may be, but not a lot of them are saying, ‘Native American with global accent.’ Hitting that on the map is pretty special to us. And we definitely want to do it right.”

Amangiri General Manager Julien Surget said commemorating the Native people is part of the spirit of Aman Resorts. Each Aman property, he said, is inspired and informed by the landscape and the culture in which it resides.

“I think it’d be a missed opportunity not to highlight (Diné culture) and to share it with our guests,” Surget explained. “It’s a great culture and (the Diné) are great people.

“And for a lot of Americans,” she said, “I think there’s very little opportunities to expose to Native cultures. So this is a really incredible opportunity to help our guests and to help the Navajo Nation itself.”

Surget said at least half of the Amangiri staff are Diné, some of whom have gone on to start their own tourism businesses in nearby Page and in Diné Bikéyah.

“I think it’s fantastic,” Surget added. “The chef created a great tasting menu that is solely dedicated to the Native American traditions of a number of tribes in the area. Whether it’s through (daily activities), through culinary, or through cultural emergent, there’s a number of ways that our guests have the opportunity to get to know the Navajo Nation.”

And he’s just not another non-Native cook doing his own style of fry bread, said Marazita, who’s mastered the art of making Navajo fry bread – using only Blue Bird flour – and other Navajo dishes he’s learned from Diné elders who’ve made them for generations.

“It’s also fun and interesting throughout every tribe you go to, whether it’s Pima, Hopi, Navajo, they all do the same thing,” Marazita said. “But of course, (some will say,) ‘Ours is better.’ And they have their little tricks and you have to take a collaboration of all those and see what really works for you.”

Cooks say in order to tackle any cuisine it is vital to understand and master basic skills before attempting complex recipes – which is what Marazita did.

Most of the chef’s experience comes from southern Arizona, home to a number of tribes such as Pima-Maricopa. When Marazita relocated to northern Arizona/southern Utah, he learned to cook with Diné traditional food through his line cooks, some of whom are Diné like his sous chef, Caleb Schwartz, who also worked at the Sheraton Grand at Wild Horse Pass with him.

Schwartz first started at Amangiri as a dishwasher and then left for culinary school and then returned to Amangiri and worked his way up to sous chef.

“I’ve got staff, sous chefs that are Navajo from the region, Page, Kayenta, and LeChee, to stewards and general line cooks from the community,” Marazita explained, adding that there are at least six Natives working in the kitchen.

“One being a higher-level sous chef and that’s a big thing for me to invest in,” he said. “Hiring domestically is important to me. I like embracing the community and celebrating the (Diné) and their concept of food.”

Without a doubt, Marazita says, the blue corn mush is his favorite Navajo dish.

“Any of the sage and juniper – anything indigenous out here, we’re big fans of,” he said. “We use every herb you can think of. Anything speaking to the culture would definitely be those without a doubt.”

The Spirit of the Journey menu is something a lot of the Amangiri guests and clientele have never had, said Marazita.

“It’s great because it’s something they’ve never had,” he said. “This is new to them. They have no idea of it.

“And what’s cool is,” he said, “to tell them, ‘This is American food, this is what American food is. This is as true as it’s going to get at the end of the day. But here’s our twist on it to appeal to you.’”

Marazita said he’s even created Diné (and other Native) inspired menus for special events throughout California and across the country.

“People really find it unique because it’s not the same cookie cutter, fine-any-menu they get with the caviar and the guy with the tweezers and 30 ingredients on one plate,” Marazita added.

“No, it’s simple and they are real ingredients that come from this region,” he said. “It’s good feedback. And that’s what Amangiri is: Native American with global accent.”

Marazita said he and his Amangiri colleagues also give back to the community through lunch deliveries to the women’s shelter in Page and support for the program. Because of the COVID-19 pandemic, this was brought to a standstill.

The Amangiri team on May 10, for Mother’s Day, provided 150 full dinners for Diné families in LeChee.

“We just really wanted to get out there and help,” Marazita said. “And taking care of the elders. It’s a big impact for sure at the end of the day.”

Amangiri first opened in October 2009. The resort’s newest luxury establishment, Camp Sarika, opened in April 2020. Camp Sarika is a collection of 10 spacious one- and two-bedroom pavilions.

Inspired by the Sanskrit traditions, Sarika means “peace,” is a 5-minute drive from Amangiri.

“We welcome everyone,” Surget added. “We treat everyone the same. Everyone is a leader in their own world … and they are our utmost attention. We open arms to everyone who wants to come and visit.”