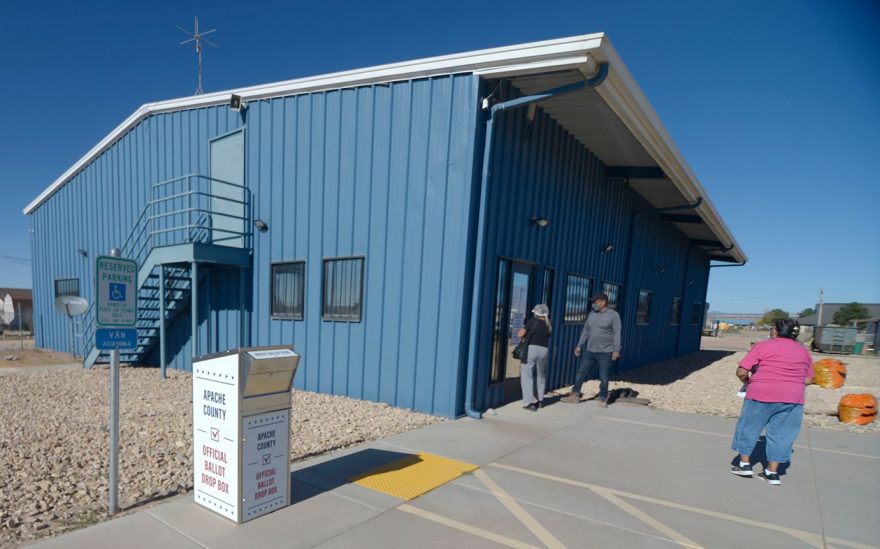 Navajo Times | Donovan Quintero
Retired teacher Linda Teller, right, and other voters check to see if anyone is inside the Apache County Office on Friday in Chinle. Teller said she and her friend drove from Rough Rock to mail in her vote. She said she is voting for former Democratic presidential candidate Joe Biden and vice presidential candidate Kamala Harris.

Retired Language and Culture teacher Linda Teller from drove out with her friend from Rough Rock, Arizona to cast her mail-in ballot on Friday afternoon.

To her surprise, the Apache County complex, in Chinle, where the early voting, mail-in ballots can be casted, was closed on Friday’s.

Teller and other voters got the county complex expecting to vote, but instead stood there wondering if they were at the right place.

Voter Perry Reed, who said he took the afternoon off from work, was a bit perturbed about it. He said he drove in to vote because, he said, KTNN AM660, the popular radio station on the reservation, was telling voters to vote.

“They should shut up about it,” Reed said. “Or least mention that it’s not open on Friday.”

Despite President Donald insinuating mail-in voting would be manipulated, more than 17 million voters have either mailed in their votes, or went to the voting booth to vote.

Trump made accusations and said during the Sept. 29 inaugural presidential debate, three days before the defeat, “tens of thousands” were seen in a “waste paper basket.”

“I am urging my people. I hope it’s gonna be a fair election. I am a hundred percent on board. But if I see tens of thousands of ballots being manipulated, I can’t go along with that,” Trump said.

Trump’s failure to protect people from contracting COVID-19 is what got Teller to drive 32 miles from her home to the Apache County Complex, so she could mail in her ballot.

Teller said she was going to have her friend bring her vote back to Chinle sometime next week since she was not able to vote on Friday.