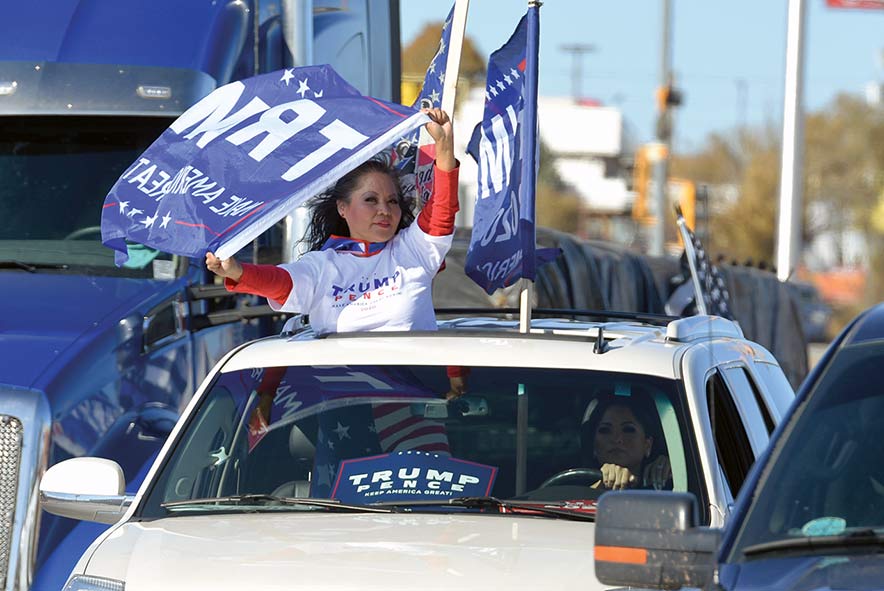 Navajo Times | Donovan Quintero Trump supporters caravan to show their support for the incumbent president this week. With several states yet to report, Trump was claiming victory Tuesday night and saying he would appeal to the Supreme Court if he is not elected.

Following a nail-biting U.S. presidential race, citizens woke up to presidential limbo yesterday morning, with no clear determination as to whether President Donald Trump or former Vice President Joe Biden had won the White House, which requires securing 270 electoral votes.

The race was much closer than many of the pre-election night polls had predicted.

As of Wednesday afternoon, Biden had earned 264 electoral votes and Trump garnered 214, with millions of votes left to count.

Despite Biden’s lead in the polls, Trump, in his post-midnight election night remarks from the White House, falsely declared victory and indicated that he intends to contest the election results. “This is a fraud on the American public,” said Trump. “This is an embarrassment to our country. We were getting ready to win this election. Frankly, we did win this election.”

However, there is no evidence of fraud at this point and no news organization has declared a victor. For months, Trump has suggested that the high numbers of mail-in absentee ballots could delegitimize the election, stoking anxiety for some voters about whether that would become an artificial self-fulfilling prophecy.

In his election remarks from Wilmington, Delaware, Biden took a different tone, saying that it was not up to the candidates to decide the election. “It’s not my place or Donald Trump’s place to declare who’s won this election,” said Biden. “That’s the decision of the American people, but I’m optimistic about this outcome. Keep the faith guys, we’re going to win this!”

Biden said that because of the unprecedented early vote, they knew counting all of the ballots was “going to take a while.” “We’re going to have to be patient until the hard work of tallying votes is finished,” said Biden. “And it ain’t over until every vote is counted, every ballot is counted.”

Biden took the key battleground states of Arizona and Michigan, while Trump won Texas, Iowa, Ohio and Florida. North Carolina, Georgia, Pennsylvania, and Alaska are key states that have not been called yet, where Trump is in the lead. Nevada, presently favored for Biden, is also still in play and would give Biden the six electoral votes he needs to win.

“Millions and millions of people voted for us tonight and a very sad group of people is trying to disenfranchise that group of people and we won’t stand for it,” said Trump. “The citizens of this country have come out in record numbers to support our incredible movement.”

With no clear winner of the presidency, the uncertainty of what will happen next is uncomfortable for some and unbearable for others as votes are still being counted by local election officials, which could go on for days.

Meanwhile, Trump said for the “good of the nation,” his campaign’s goal is to ensure the “integrity of the election” and intends to turn the matter over to the courts. “We want the law to be used in a proper manner so we’ll be going to the U.S. Supreme Court,” said Trump. “We want all voting to stop. We don’t want them to find any ballots at 4 o’clock in the morning and add them to the list.”

One thing is for sure, the coronavirus pandemic did not appear to dampen voter enthusiasm or dissuade voters from casting their ballots, leading to a historic voter turnout through absentee, early and in-person voting at the polls. “We feel good about where we are,” said Biden. “We believe we’re on track to win this election.”