The color purple can only be seen on the eastern horizon before the sun rises — the light gets brighter and changes to red, then orange, before the first rays stretch across the Navajo landscape and protects the Navajo Nation with sha bitł’óól k’aa.

Tsídídééh hxódootłʼizh also happens to be the color candidate for Navajo president Justin Jones is using for his campaign.

“That’s the purple color that we’re using. Why are we using that? Because diijį́į́di we need healing today. We need lots of healing,” Jones said on Saturday at the Gallup Flea Market, where he held a campaign rally.

Since making his first appearance at the first forum in Farmington on June 3, the Marine Corps veteran, who said he served from 1989 to 1994 during Desert Shield and Desert Storm operations, has been on a mission.

His mission is to become the next Navajo Nation president.

“That’s how we’re looking at it, and we know what the prize is,” Jones said.

Jones, who grew up in Rock Point, Arizona, brings a plethora of experience to the presidential office if elected. 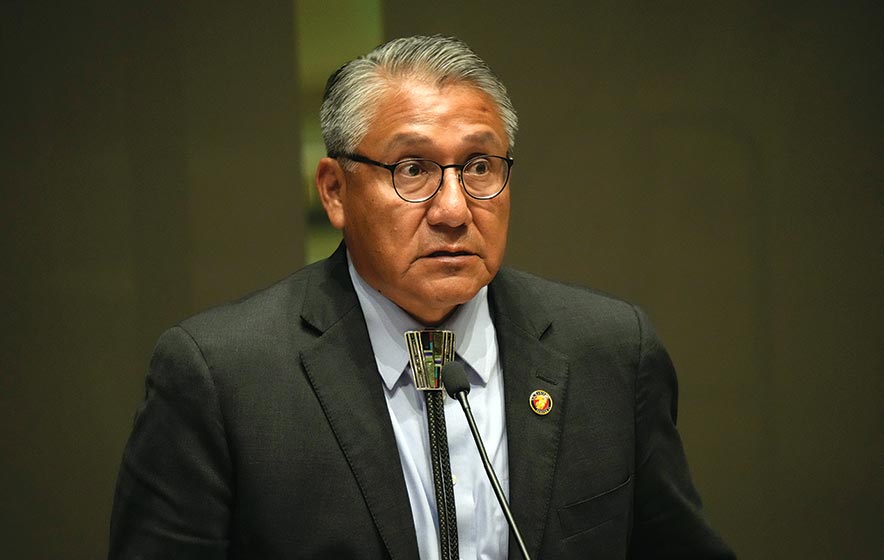 After the military, he went to Fort Lewis College in Durango, Colorado, where he earned a bachelor’s degree in political science. He then got a law degree from the University of Kansas School of Law and his tribal law and government certificate.

Before starting a law firm, Jones held a variety of positions. He was a personnel director, director of education, and director of administration at Rough Rock Community School; an executive director at Association of Navajo Community Controlled School Boards Inc.; and a chief judge at the Courts of the Jicarilla Apache Nation. He also was a senior governmental affairs manager at BHP Billiton.

For years he said he was asked to run for the tribe’s highest office. Every time, he said, “no.”

But after filing so many lawsuits against the tribe, Jones said he began realizing it seemed he wasn’t getting anywhere for his clients.

Jones said he has been suing the tribe for violating grazing permits and home-site leases, both of which took up the bulk of his legal practice.

He also has business preference cases in court, which prompted him to run, said Jones.

“How many Navajo own businesses are really on the losing end? They get passed over for contracts they are given. It seemed like extra regulations, more regulations for them to jump through,” he said. “There are 29 steps to get a business site lease right now.”

According to the 10-page Navajo Nation Business Site Lease application, a prospective business owner must complete 14 steps before handing their application package to one of seven Regional Business Development Offices, or RDBOs, and the Bureau of Indian Affairs.

Representatives from the RBDOs and BIA must ensure the 14 steps have been completed by putting the application through an additional 13 steps before it goes through a 164-review process.

If the application survives, a Council delegate is requested to sponsor a bill, taking it through several more steps.

After review, the president signs it. One might think that’s when a business can finally open – but no.

The package is then sent to the BIA agency superintendent, who further reviews the package. If they find no discrepancies, it is signed.

“Out here in McKinley County, there’s really only about three real main steps that you do,” Jones said. “Everything’s pro-business over here. What really is embedded in there is that the law that is written — the Navajo Nation government is the worst offender of the law.”

Jones said the home-site lease and grazing rights permits pits the permittee against another permittee, creating chaos between the parties.

“I wish I could rewrite the law even though the Council won’t agree, but I have to take the initiative also,” he said.

Elderly abuse, elders getting second-rate health care and not being adequately given a proper breakdown of what Medicare and Medicaid are; veterans denied benefits; and children taken from their homes are other reasons he decided to run.

“That’s kind of where I came from in concluding to say that, ‘Hey, I got to do something here. There has to be more that I can do, rather than just through my lawsuits,’” Jones said.

After the Supreme Court took away the constitutional right to abortion, states like Arizona, which passed a law that bans most abortions after 15 weeks, applauded the decision, while New Mexico condemned it.

While the decision does not impact the tribe, it could impact Navajo women who opt for it.

A few days later, the Supreme Court overturned another case giving states jurisdiction to prosecute non-Natives who commit crimes on a reservation against Native Americans. The Court also gave states powers over tribes.

Jones suggested that as president, he would look into forming coalitions with other tribes to protect their sovereignty.

“I think that we’re going to make a lot of impact in terms of protecting our sovereignty or protecting our ways of life,” he said. “We have to get ourselves in order over here. And so, these fundamental things I think we have to begin to do to reach that protection.”

On natural resource extractions, Jones said he is against uranium, against helium development, but is for Navajo allottees developing oil and gas extraction because they have surface and subsurface possessory rights.

“They can actually sell that if they want, just like any fee simple property outside of the reservation that’s not leased,” he said. “So, when people say, ‘I own this land,’ they are right; they own that.

“If you’re going to give somebody something, don’t tell him or her how to use it thereafter,” he said. “Especially if they use that to feed their kids, to clothe their kids.”

Jones said opponents should protect the Chaco Culture National Historical Park with a proposed 10-mile buffer zone rather than allow tens of thousands of non-Native tourists to visit the sacred site.

Opponents argue that allottees are developing their property to extract oil and gas and are damaging the site.

“If it’s a truly ceremonial site, then you would shut it down, that you would protect it like that, and only certain medicine men can go over there to make offerings,” Jones said. “Because of that, I see this as a purely an external outside influence argument that’s there, which is environmentalism.”

During the June 21 forum at Twin Arrows Casino, Jones said Navajo Nation enterprises are hurting the Navajo people more than they are helping.

“They are a monopoly, people,” Jones said on June 21. “They are unregulated, and they are going by the fact that they feel that they can create regulation themselves. We have to stop that.”

To create an economic stimulus for the tribe, Jones said he would invest in real estate and use trains to transport products made by the Navajo people.

“Down in St. Michaels, there are some fee simple lands that are there. They can be purchased almost immediately for a good price,” he said.

He said the tribe could circumvent the BIA and Navajo Nation restrictions that have thwarted Navajo entrepreneurial ideas to thrive by purchasing properties.

The tribe also could start buying lands and buildings in cities like Albuquerque and Phoenix and invest in them.

“I think their return is going to really start coming in pretty quick,” Jones said. “If we have a big old strip of land that we bought, who knows, we may go to Elon Musk and say, ‘Hey, can we bill your batteries?’

Jones said if he becomes president, Navajo law says he will have to remove himself from the lawsuits he has against the tribe.

“I’m already telling some of my clients too that this may happen,” Jones said. “I have to transfer all of those cases to somebody else, another attorney, that is going to take over from there.”

Jones said at the flea market on Saturday that if the Navajo people sincerely want change, they won’t vote for the person – President Jonathan Nez – who handed out vegetables at the height of the COVID-19 pandemic.

“So, rather than just complain on the side and just be apathetic and whatever, go to the polls and vote him out,” Jones told supporters. “That’s the only way it’s gonna happen.”

He added that to make more significant changes, a new Council must also be voted in.

“Vote for a Council that’s gonna work on real issues and real problem rather than their own personal agenda, or rather than a political agenda against maybe a president that’s sitting over here,” he said.

Jones explained in Diné the meaning of the color he was using and the two arrows in it.

“Why is one arrow all crooked and the other oneʼs all straight?’ There is a story for that. Itʼs a belief, itʼs a prayer,” Jones explained.

“These are the kind of things that we need in our lives today,” he said.

Jones is in position No. 4. The primary elections are on Aug. 2.