The story of Rosanna Jumbo-Fitch, a candidate for Navajo Nation president, is not a complicated one.

Though the Chinle native grew up modestly, she remembers her parents teaching her and her siblings about the richness, respect and honor of their culture and how far it could take them if they lived it. 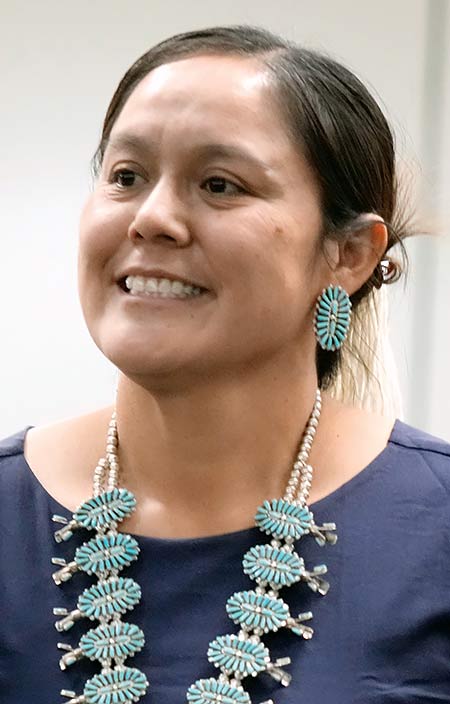 Her parents always ensured the family had enough to eat, clothes to wear to school, and a warm place to sleep.

Jumbo-Fitch, 36, grew up in her grandmother’s home. Later, she and her family moved into a new home her parents purchased.

She said the family then built a traditional hogan they used for ceremonial purposes. There she began learning the meaning of hard work.

They hauled wood, water for the family, hay for their livestock, and planted corn every growing season.

“It was definitely a struggle,” Jumbo-Fitch said.

But the struggles weren’t just for her to ponder and question. She remembers her parents, who have passed on, teaching them why it was essential to learn good habits.

“They instilled in us good work habits and the meaning of how important our ways of life are,” she said.

Her Diné teachings began showing through the challenges she set for herself. She bases those teachings, she said, on every decision she makes in her life.

She said she took her parents’ and grandmother’s teachings and represented them as best she could.

She excelled in academics, played sports, and reached the highest levels in Chinle High’s Army ROTC. College was no different.

In addition, she said she also operated heavy equipment and did work as a surveyor and a laborer.

After graduating from high school in 2004, she enrolled at Northern Arizona University. She earned a bachelor’s in construction management, business and community design.

Then she earned a master’s in project management and a doctorate in education in curriculum and instruction.

While in college, Jumbo-Fitch became a field manager and an assistant project manager in commercial construction.

While pursuing her doctorate, which she began in 2011, she started a construction company, R. Jumbo Construction, in Flagstaff, in 2013.

When the COVID-19 pandemic hit, Jumbo-Fitch sprang into action and collected and delivered donated items to her community residents in Chinle.

According to a photo published in the June 25, 2020, edition of the Navajo Times, Jumbo-Fitch’s company made weekly deliveries of COVID-19 relief supplies to her home chapter. It delivered more than $100,000 in food, soap, paper products, hand sanitizer, diapers, books and PPE to more than 4,000 residents.

Perhaps it was constantly being challenged, seeing society advancing, or the Navajo Nation lagging further and further behind.

Or maybe it was her natural ability to take the lead in any task she set her mind to, but Jumbo-Fitch decided to put her sights on Navajo politics.

In 2020, Jumbo-Fitch ran for Chinle Chapter president and won. One of her first tasks was collaborating with other chapters on wood distribution for residents.

Another big task she took on was restoring and improving wash berms. By February this year, a two-mile berm, standing six feet tall, was built and was designed to prevent floods from damaging residential areas.

Since taking the helm as Chinle’s “mayor,” she said she quickly learned the chapter had to seek resources without the help of the executive branch.

After President Jonathan Nez’s welcome speech during the chapter officials’ swearing-in ceremony in January 2021, she did not realize that the address would not be enough because it failed to tell new chapter officials what to expect.

She also realized that longtime chapter officials continually re-elected were part of an ongoing problem the 110 chapters faced.

“They think it’s just a job where you can sit at a desk, but it’s not,” Jumbo-Fitch said. “You are the leader. That’s one thing people don’t understand. You’re the one that makes the wheels turn.

“And a lot of people are stubborn,” she said. “They don’t want to listen to other ideas. They’re stuck in their ways of how they ran their chapters.”

As part of a new generation of young, educated Navajos, Jumbo-Fitch said her drive comes from her challenges as a woman in leadership.

“I understand and live the struggle and benefits of the great Navajo Nation as many of my peers,” she said.

“But when you don’t understand that you have that power and you have that leadership to take your community forward, it’s hard to do anything with it,” she said.

Seeing that she could contribute on a larger scale, she decided to run for the tribe’s highest position.

“All my traditional teachings, education, and careers have led me to this point,” she said. “It is my deepest passion to serve my people.”

Since she began campaigning along the highways across the reservation, she started noticing the heavy amount of tourism traffic and tourism dollars that were leaving the reservation.

One idea she thought of was how the tribe could investigate creating toll fees for the tourism traffic so that it could start generating funding.

“A lot of people understand our values of Diné culture, as Diné people, and they honor it with us,” Jumbo-Fitch said. “I’m sure they don’t have a problem or an issue with supporting it because twenty dollars is nothing to most people – if they’re willing to pay it and drive through Grand Canyon, they should be willing to pay for to enter our Navajo Nation.”

The traffic would also support local artisans, adding that many of them set up their artwork and clothing designs along reservation highways.

Jumbo-Fitch said if she isn’t elected Navajo Nation president, she will go to “plan B.”

“I will still continue to work with my local community,” she said. “I have two more years to serve. And I know I’m a dedicated person to my people.

“I will continue to do my purpose there at the chapter level to continue to need to work on the projects I have planned,” she said.

Jumbo-Fitch is in ballot position No. 15 in the 2022 Navajo Nation Primary Election on Aug. 2. Voter registration for Navajo Nation voters closes on June 24.

Jumbo-Fitch said she was supposed to participate in a forum last Wednesday, hosted by the Diné Bi Ołta School Board Association conference in Albuquerque.

However, the association canceled the event because an attendee tested positive for COVID-19.

She attended a second forum hosted by the Northern Agency Veterans Organization in Farmington. She shared her ideas with the veterans in attendance, including Navajo Code Talker Samuel Sandoval.

The next presidential forum will be on June 14, at Navajo Technical University in Crownpoint, on June 21 at Twin Arrows Casino and on June 28, at Diné College in Tsaile.