She’s the granddaughter of the late Councilman Mescalito Nelson. 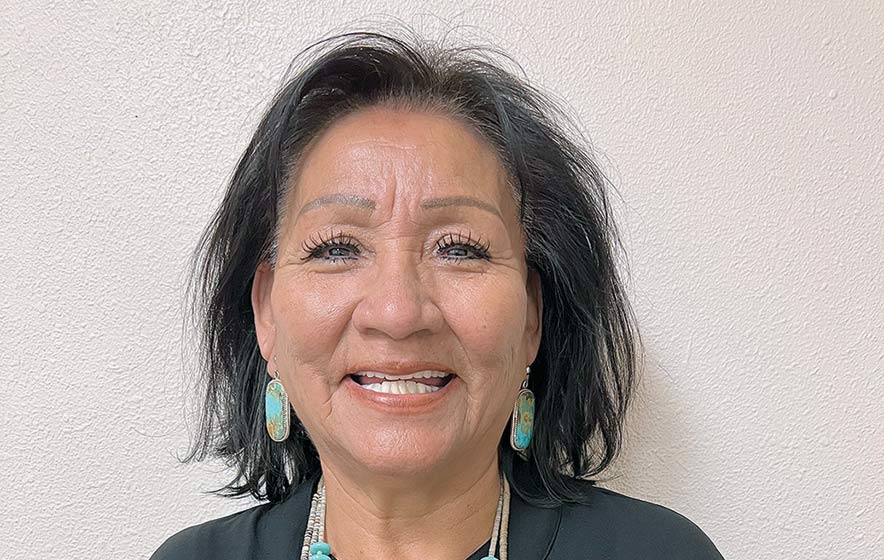 Navajo Times | Krista Allen
Frankie Davis, 68, from Pueblo Pintado, N.M., is running for Navajo Nation president. Davis is a business owner and a YouTuber under the name “Navajo Grandma.”

She’s ambitious and refuses to conform to traditional gender roles. And she’s had enough.

Frankie Davis, 68, doesn’t echo the sentiment of other candidates running for Navajo Nation president, but her story emerges most fully.

She said Navajo presidents have a long history of making bold promises to win an election. And it’s not worth listening to candidates running for president if they fail to keep them, said Davis.

“We’ve given you men so many chances – it’s filthy!” Davis said of the nine male Navajo presidents. “You guys have screwed us over! Look at your records! It’s embarrassing!

“Somebody’s got to knock some sense into us,” she said. “It’s got to stop. So, a woman, I think it’s time for that woman.

“It doesn’t mean the end is near!” she exclaimed. “It means the women are fed up with watching the men fail in their leadership roles.

“You’re not being an example for our babies, our children, our posterity!” she said. “I need to make a difference. My nálí, I want to lead as he did. It was incredible to watch him.”

“I have grown and watched,” she said. “I’ve listened.

“I’ve observed for 60-plus years, and really, nothing has changed (in the Navajo Nation),” she said. “I’m from the Eastern Agency. There’s no water still. The Navajo Nation has had the water rights, and we’ve never come to the table.”

Because no woman has ever ascended to the highest office in Diné Bikéyah, the glass ceiling remains unbroken, said Davis, who believes in equality of opportunity and achievement. This is why she’s running.

“There seems to be no direction at all,” Davis said. “We’re not moving forward.

“You see people throughout the years who’ve embezzled money, gone to prison, mismanagement,” she said. “You can say that so long as you’re a mother and a grandmother.

“I’m going to take the hub of the wheel and see if there’s anything I can do,” she said. “It’s critical.”

Davis said the Nation needs a female president who is humble and who loves the Navajo people, among a list of her presidential ambitions. She draws attention to finding common ground and loving those from different backgrounds.

She said expressions of love for others might include being kind to them, listening to them, serving them, and being their friends.

“Not to let other negatives in and truly love who you’re talking to and make the honest effort as my grandfather did,” she said. “I’m really tired of watching and seeing this play (repeatedly).

“Somebody needs to make a change, and we need to pivot,” she said. “It starts with you and I. We need to really find out who we are. Where are we going?”

Her nálí, Nelson, would often ask, Háágóó ahoosdee’? – meaning the Nation wasn’t on the straight and narrow.

“He used to say, ‘Someone has to pivot,’” Davis explained. “What good is the fundamental laws (Diné Bi Beenahaz’áanii) if we don’t love each other? What good are they if you don’t give love, hope, and charity to one another?

“That’s where it starts: in your home,” she said. “People are yelling, they’re raping, murdering, pedophiles. It’s horrible. I can blame the outside, the white people coming in and teaching those things.”

She emphasizes that the Diné are falling away from culture and forgetting their language. Davis doesn’t speak Navajo fluently, but she reads and writes the language.

“There are so many broken homes,” she said. “You wonder why so many women are missing. They’re trying to find love and purpose, and that somebody loves them.”

Davis said the basic need in the Nation is for the people to be taught true principles of love. She speaks of love as meaning a lack of personal selfishness.

“That’s the kind of love to be cohesive, care about and value each other,” she said. “We don’t.

“Diné, they’re arguing, and it’s sad,” she added. “All these horrible things, it’s in the air, and it needs to stop, and it comes back to our cheii and our másáni. We talk about the holy ones, and where are the holy ones in our life?”