Forum in Phoenix fields questions for 12 of the 15 candidates 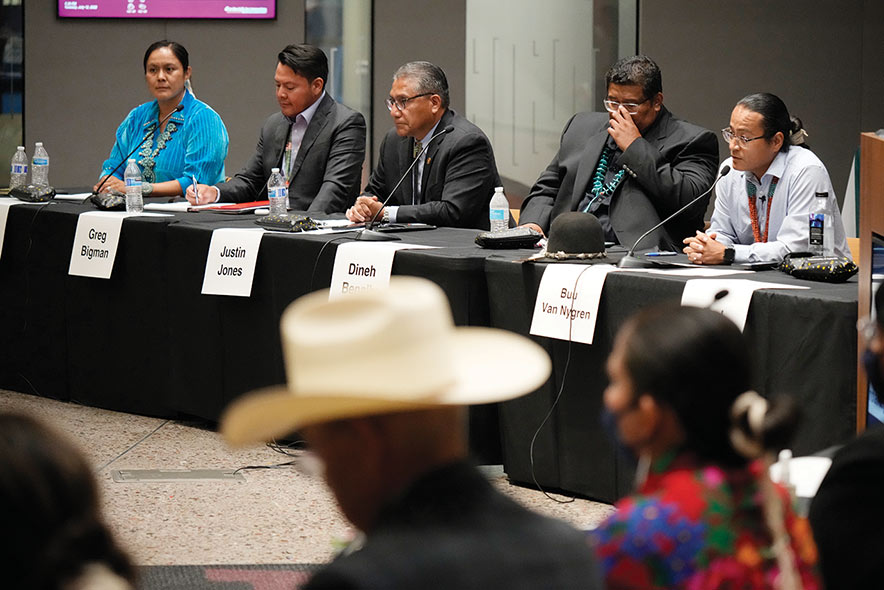 With more than three weeks before the primary election, Navajo voters in Phoenix, Tempe, Mesa and Chandler got a chance to hear which candidates for Navajo Nation president made the most sense.

Begay, originally from Lupton, said she attended to support candidate Ethel Branch, but after hearing the other candidates, her vote may go to another.

“(Justin) Jones, he made a difference in what he was talking about,” she said. “And I was very impressed with him. So, it might be between those two.”

With the overturn of several precedents, including Roe v. Wade and Oklahoma v. Castro-Huerta, by the U.S. Supreme Court, Begay said a female president would help the Navajo Nation move forward.

“I really would like to see a female president,” said Begay, who’s been living in Phoenix for about 13 years.

Cassondra Smith, originally from Coppermine and resident of Phoenix for more than 20 years, said Branch and Buu Nygren are the two candidates at which she’s looking.

“Ethel (Branch) has a lot of strong quality, strong experience,” Smith said. “She’s proved she has a good, proven record.

“Buu (Nygren), he’s young, he’s energetic, he has some really great ideas,” she said. “So, I really do appreciate that.”

Smith said she is an engineering firm’s transportation planner and project manager. She hopes to move back to the reservation eventually.

But several things, like lack of housing, home-site lease red tape, and lack of positions that would match her experience and qualifications, keep her in the Valley.

“There’s not a lot of positions there now for people that have my experience, my qualifications,” Smith said. “So, that’s why I chose to stay off the reservation.”

And while it would be “great to serve the tribe” if she was asked to work under the administration of Ethel Branch, Smith said she would not accept an offer.

“I have to make a living right and that, especially with the economy right now, it would be a struggle,” she said. “And one thing they did bring up was the land issue – grazing rights and not enough housing.

“So, that would be one thing that I would be going back to,” Smith said. “I live on the western side of the reservation. So having to serve like in – let’s say, you have to work in Window Rock, that’s also an issue if you’re traveling two to three hours every day or are having to find a temporary place to stay.” 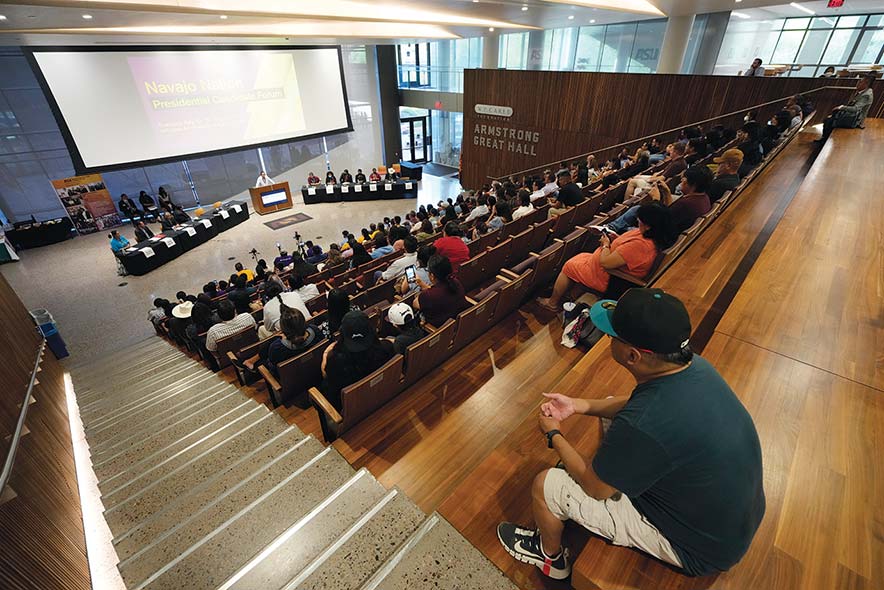 Candidates were given one minute to answer questions on judicial funding shortfalls, whether they’d legalize marijuana, same-sex marriage and abortion, and how they’d accommodate housing for youth and families who want to return home to work.

Another question was about streamlining the grazing-permit process for future holders.

Candidate Dineh Benally said, “You guys know what I’ve done,” after saying it was derogatory to call cannabis marijuana, which got the loudest response and laughter of the night.

Benally is referring to being accused of growing hemp. According to a June 24, 2020, temporary restraining order granted by special counsel Charles W. Galbraith, Benally is alleged to have cultivated, grown, developed, and propagated an industrial hemp farm in Shiprock.

Candidate Emily Ellison was the only one to say she would oppose legalizing marijuana.

Former candidate Dale Tsosie, who made a bid in 2014 and filed a complaint against Chris Deschene for not being a fluent Navajo speaker, said he was concerned Navajo principles were being thwarted in the name of progress.

“I think there’s some morality that’s been lost, it’s being sacrificed to go forward,” he said. “That’s kind of what I saw as well tonight. So that’s the sad part about what our nation is becoming — we’re sacrificing morality to move forward.”

Tsosie said the Navajo people have to learn how to hold onto their traditional beliefs, language and the Diné way of life while continuing to progress using Western education, thinking and techniques.

“It’s gonna be really tough,” he said. “The thing is, we have to bring some of those from the past with us, but we can’t go totally back, and so we have to use those to go forward.”

“Some of the thoughts, some of the ideals, some of the teachings, are things that can make us go forward,” he said. “And I like some candidates express it pretty well tonight.” 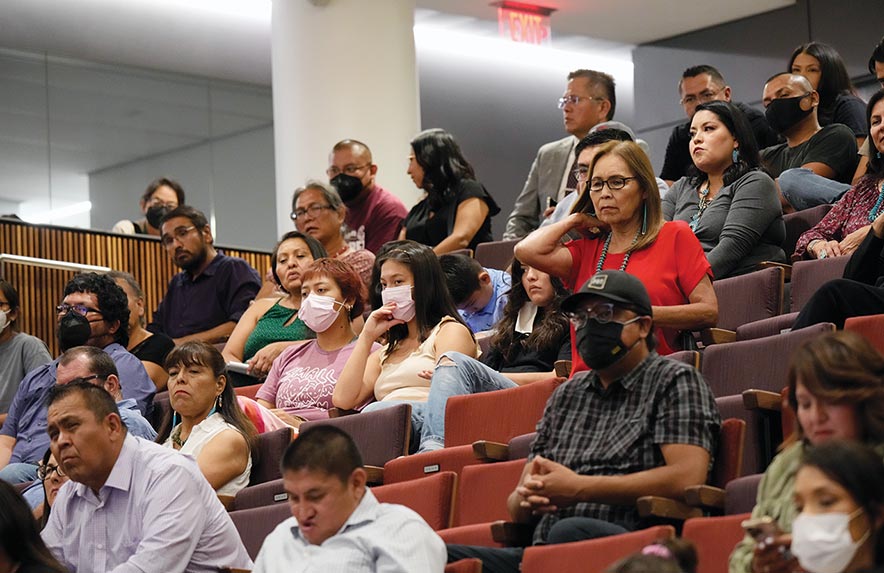 Navajo Times | Donovan Quintero
Navajo voters look on and listen to the candidates on Tuesday at the forum held at Arizona State University’s Sandra Day O’Connor School of Law in Phoenix.

Tsosie added the gap between the Navajo elders and younger generations is widening.

“We’re leaving people behind, (and) we’re becoming disconnected from the older generation for the sake of moving forward,” he said.

He was asked what he thought of candidates and forums using more social media to campaign and ask questions.

“We’re becoming disconnected from our elders, the wisdom that they have, we’re starting to lose that, and we need to capture that,” Tsosie said. “Facebook is not going to capture it. We have to go among the people to really capture that and speak to them in their language, and they will understand it.

Forums scheduled for the candidates for president include July 14 at Sky Ute Casino Resort in Ignacio, Colorado; July 23 at the Bulpitt Auditorium in Phoenix; July 24 at Teec Nos Pos, Arizona; July 26 at the Gallup Community Center in Gallup; July 28 at Houck, Ariz.

The Primary Election is on Aug. 2.