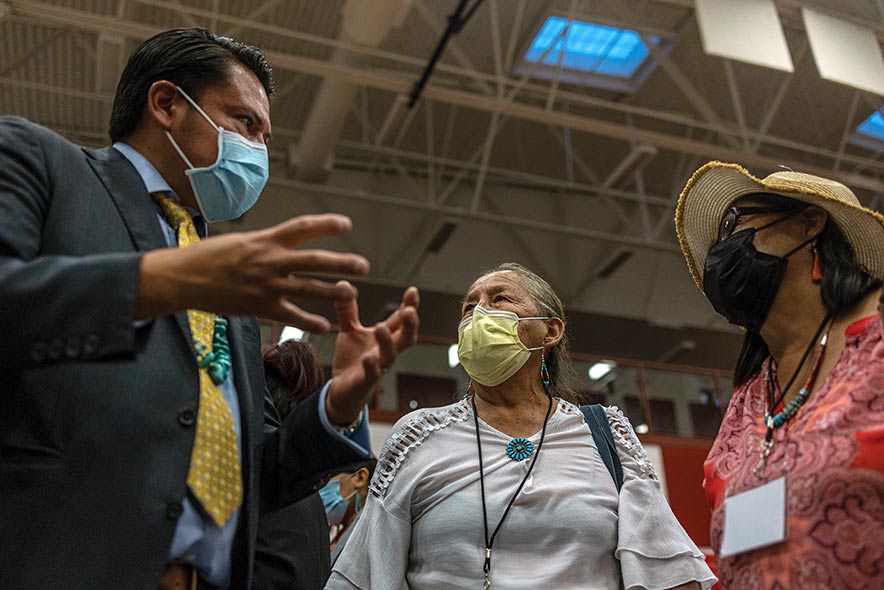 Questions relating to the four topics kicked off the candidates for Navajo Nation president’s forum on Tuesday at Navajo Technical University. KTNN Radio co-hosted the event with NTU.

All 15 candidates, seven women and eight men, attended with Buu Nygren and Ethel Branch tuning in via Zoom, while their supporters either campaigned outside the NTU Wellness Center or cheered from the stands.

The candidates were separated into four groups and were given three minutes to respond to questions relating to one of the four topics. Each candidate was then asked individual questions and had one minute to answer.

NTU President Elmer Guy told the audience and candidates there were many challenges and problems the tribe faced.

“We need to ensure that our culture and language is a vital part of the heritage going forward,” said Guy.

He added that while more Navajo people were going to college, the tribe still lagged behind, mentioning several universities that offered doctoral programs.

“Harvard Medical School, University of Georgia, University of Arizona, University of Idaho, and many other higher education institutions offer doctoral programs, but our nation is still lagging behind the average educational attainment in the United States,” said Guy.

Candidate Leslie M. Tsosie, from Standing Rock, New Mexico, who said she did not get an invitation to attend the veterans’ forum in Farmington on June 4, said she was “full blown for education.”

“It is difficult for us as Native Americans to go into higher education,” she said. “I started off at a tribal college university, came through here actually at NTU.”

Tsosie said she was happy to be home, adding she got both her bachelor’s and master’s in cultural language and leadership at NTU. She added she recently got a second master’s from the University of Oklahoma College of Law. 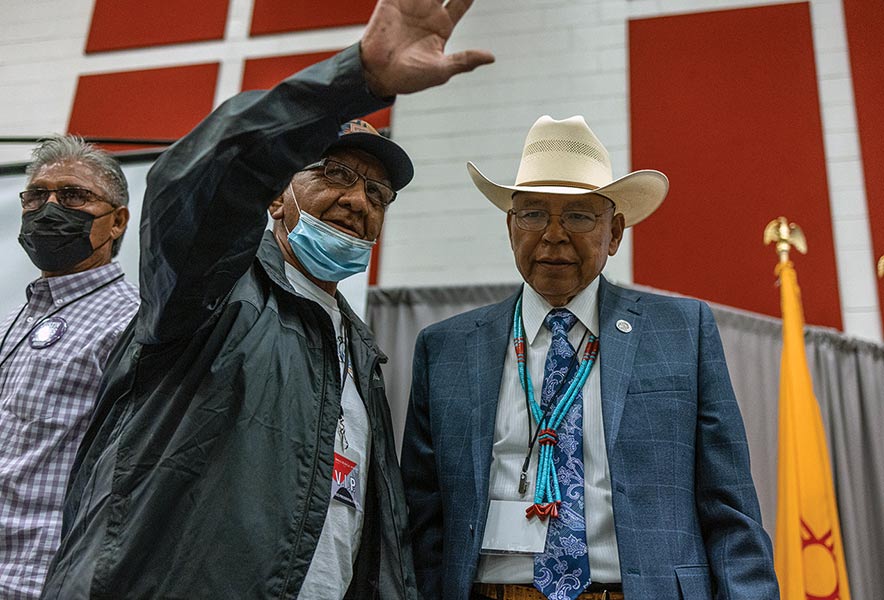 While the perks of being highly educated seemed to have paved a path to success, this wasn’t the case for Tsosie.

Acquiring her degrees came with major challenges that many Navajo college students and graduates experience – not having a home to live in if they move back to the reservation.

She became homeless as she struggled to acquire her great-great grandmother’s home in Standing Rock. When she finally moved in, her struggles didn’t end there, she said.

The roof needed repair work and she had no way of heating the home.

After she got situated in the home, she ran into another problem college grads face when trying to get a job on the reservation: No experience.

“Education doesn’t mean it isn’t good credentials,” Tsosie explained trying to get a job on the reservation. “I don’t understand when I get letters back saying I don’t meet the minimal required requirements when I’m carrying two masters.”

To pay the bills and put food in the fridge, she took temporary jobs. Despite the hardships she experienced, Tsosie remained optimistic.

“Thank goodness I do have running water,” she said.

Tsosie was asked what steps she would take to expand housing construction on the Navajo Nation.

“We need to really be honest with ourselves and honest with our people of who, how and what we can do to get those families in their home,” she said. “People come home and they have nowhere to go when they get a job here.”

Kevin Cody, who ran in the 2018 race for Navajo president, and who also did not attend the June 4 veterans’ forum, was asked what his economic recovery strategy would be to fill the loss the tribe took after the closing of the coal mines and lackluster oil and gas production.

Instead of providing a strategy, Cody criticized the mining industry, saying the tribe never should have started coal mining.

“We got to start looking in different directions, instead of looking at natural resources,” he said.

Cody took a jab at the tribe’s casinos saying they were attracting Navajo customers.

Candidate Ethel Branch said seeing how the needs of the farmers impacted by the 2015 Gold King Mine Spill, when she served as the Navajo Nation attorney general under the Russell Begaye administration, were not addressed, this inspired her to start raising funds that went towards relief efforts when the COVID-19 pandemic hit the reservation.

“I pulled in many other grassroots leaders, women leaders in our community primarily, to make sure that they were able to help me get those resources to as many people as possible, and we’ve successfully served almost half a million of our people in that respect,” said Branch. “That was very impactful at the grassroots level.”

Sandra Jeff, who dropped out of the New Mexico secretary of state race in 2018, said she appreciated the vast amount of experience and background each candidate, particularly the female candidates, could bring to the office.

Can see a woman as president

“I can see one of us as a woman to become president because it’s about time,” said Jeff. “We work out of the home. We’re the ones who take care of the needs of our spouse, our children, so why can’t we get out there and run for office?”

“I was a former legislator,” she said. “I got the job done. I’m so happy that I see these other female candidates running because I believe that they’re my family, they’re my sisters, they’re my mother, and they’re my nieces.”

Jeff was asked how her administration would ensure NTU and Diné College would continue receiving adequate funding.

“I want to sit at the table, work with our local leaders to make these things happen for our people, for our students, for our staff, and faculty,” explained Jeff, and adding she’d also work with the federal government.

Former President Russell Begaye said he wished he could say one candidate stood out to him.

The former president said if how the system works is not understood, whoever is elected into office will not get anything done.

“I think a lot of it is not knowing the structure,” he said, “how Navajo Nation works, how they collaborate with this state, county, the feds, Congress, White House – it’s not knowing how that works, and the flow of money, and I’d say it’s a learning you got to learn.

“If you don’t, I’d say you’re not gonna do anything without understanding how the system works,” he said.