Swing vote: Native youth encouraged to vote at ‘Skate to the Poles’ rally 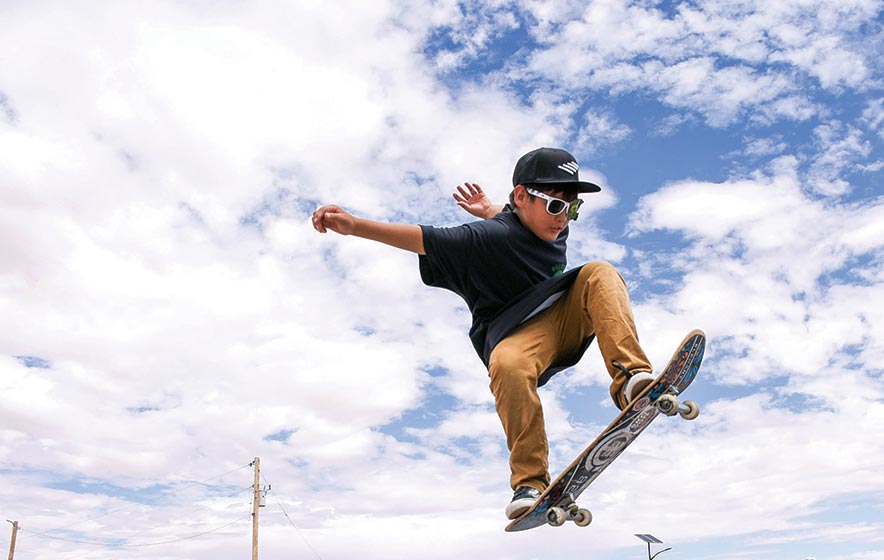 Navajo Times | Krista Allen
Joshua Chenally, 12, from Kayenta, makes a jump over a ramp during the Skate to the Polls rally on Aug. 13 at the Kayenta Skate Park in Tódinéeshzhee’.

Joshua Chenally knows he can vote in six years.

He also knows voting wasn’t always a default right for everyone and that voter suppression is an issue.

That’s what he learned in school: Voting matters – even though it may not directly elect a candidate running for office.

He’s not ready to vote but enjoys skateboarding with his friends at the Kayenta Skate Park, where a “Skate to the Polls” rally took place on Aug. 13.

“It was really good,” the youngster said of the event that combined civic engagement with Native skateboarding culture. 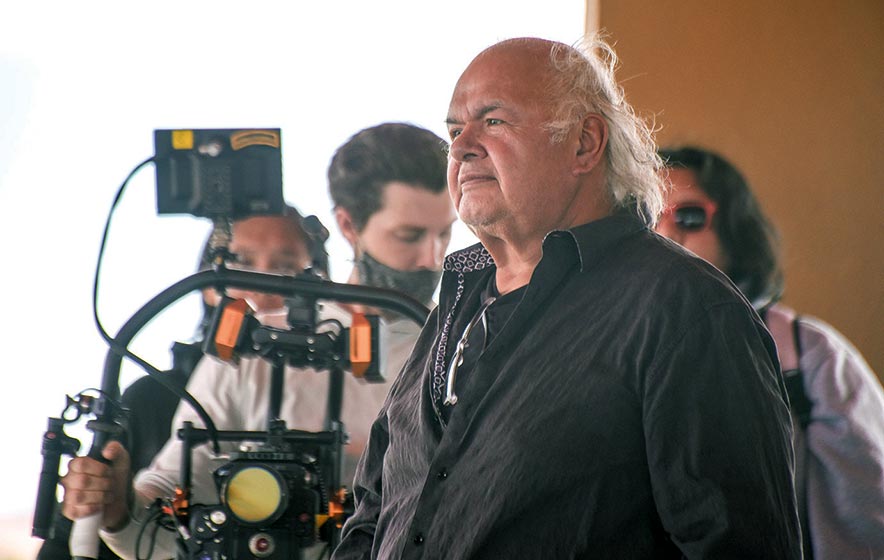 Navajo Times | Krista Allen
Canadian actor Gary Farmer, who portrays Uncle Bernie on the FX series “Reservation Dogs,” stands during a prayer/blessing ceremony for the Skate to the Polls rally on Aug. 13 in Tódinéeshzhee’.

Professional skateboarder Alec Beck, who attended the event to support its cause, says the common reason novice skateboarders fear skateboarding is the fear of falling.

And overcoming that fear with that same passion is what one needs to advocate for their community.

“Go out and be that change,” said Beck, the programs manager for The Skateboard Project in Vista, California.

“For people who can’t accurately ride a skateboard, it’s scary, but it’s fearless,” he said. “That type of fearlessness gets you up off the ground, and it’s the same passion it takes to change things in (a) community.”

Actor Gary Farmer, also in attendance, said he never voted when he was younger because he was an old-way holder in his Six Nations tribe in Ontario, Canada.

“You have to protect this land,” Farmer said. “You should be a state unto your own – that would make a lot of things so much easier.

“The state of Navajo, the state Dinétah,” he said. “That’s what it should have gone to.”

Farmer, who portrays Uncle Brownie in the FX series “Reservation Dogs,” said Natives need to reach out just as the Native writers did for “Resident Alien,” “Rutherford Falls,” and “Reservation Dogs” that effectively capture a shared, modern Native experience.

“Like anything else you create!” Farmer exclaimed. “It’s really important you share that message with the rest of the world. There is no place like home here – nowhere else in the world is there peace, tranquility and beauty.

“Make the change,” he added. “Help the rest of us make this change.”

But now is not the time to be quiet when America is divided, and there are challenges to democracy.

“It’s time to let your Native voice be heard (at) the polls,” Miles said. “There’s no (time to sit) around like a shy little (Native). Now is the time to let the Bilagáana in those big offices know what we want and what we need.”

Miles said he’s frustrated over issues in Indigenous nations across the U.S., such as housing and a lack of job opportunities.

“I’d like to walk outside here in our house and turn the water on,” Miles said. “You need to tell the Bilagáana we need water when we turn the faucet, … we need electricity when we flip the switch; we don’t want to drive 50 miles (one way) to get water, and we’re tired of driving 50 miles to get gas for the generator.

“This is our job, young people,” he added. “We need to get down to business and vote. Tell those who are running what you want!”

Lycia Maddocks, the political director for NDN Collective in Rapid City, South Dakota, says voting is one way people can use their voice because they have more political power than they realize.

“We want to make sure we’re using our voice to protect our lands, to protect our bodies,” Maddocks said, “to protect the education that our young people receive so that we can get representation and make sure that in places like Washington, D.C., our voices are heard here on the ground at home.”

And if politics is a conversation, every person has a voice,” Maddocks said. “I’m watching how young people’s voices deeply impact laws, policy, and education.

“The young people are stepping up to make sure it happens because you all are fearless,” she said. “We need fearless leadership right now.

“And now, (I) see it in (every) one of you,” she said. “I encourage every single one of you young folks to register to vote.

“I would love to see families (discussing) voting and the importance of standing up and speaking power to the young people,” she said.