‘Tell it like it is’: First Diné woman running for Utah House seat 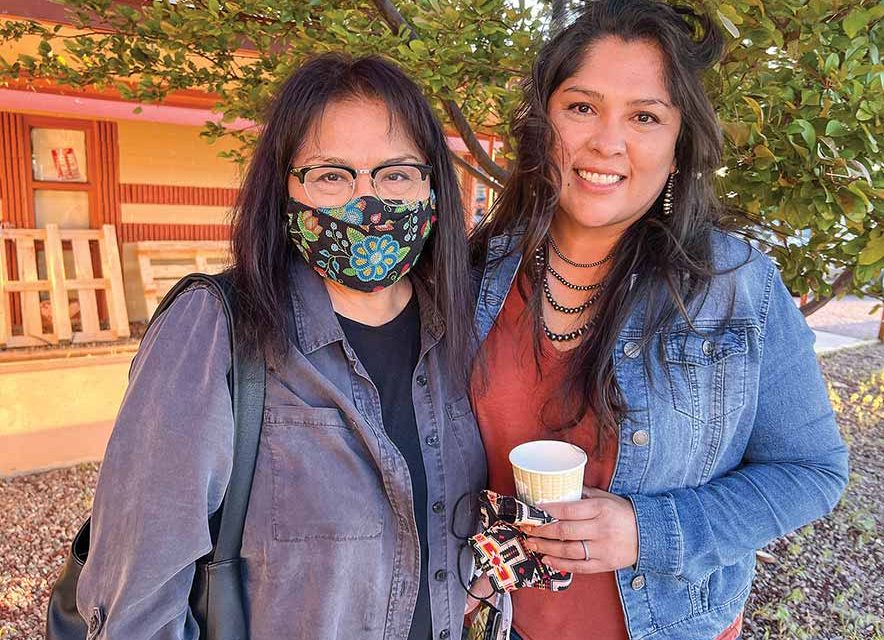 Navajo Times | Krista Allen
Davina Smith stands with her mother, Darlene Smith, outside the Aneth Chapter House in T’áá Bíích’į́į́dii on April 29. Davina, originally from Tsébii’ndzisgaii, is running for Utah’s House District 69, which covers about one-third of the Beehive State.

Whenever their daughter floundered in self-doubt growing up, they’d tell her, “You’re a Smith. Katherine Smith is your grandma. You can do it!”

Her nálí was her muse, said Darlene Smith, Davina’s mother.

Davina was only a child in the mid-summer of 1979 when a Bureau of Indian Affairs crew set out to fence Katherine’s property on Dził Ntsaa only to find themselves staring into the muzzle of her .22 caliber rifle.

“She was with her during that time,” Darlene said of Davina. “Katherine was a strong lady, and that’s where Davina got her inspiration.”

“If we don’t share what we’re going through in our homelands, people in the outside world will not understand that,” she said. “They’re not going to see that, and right now, they don’t care.”

Davina is a candidate for the Utah Legislature. Late last year, she entered the race for Sooléí Hahoodzoh, Utah’s 69th House district seat.

Davina is the daughter of Roy and Darlene Smith. She is Bitáá’chii’nii (Táchii’nii), born for Tábąąhá.

If she wins, she’ll be the first female Diné legislator in Utah’s 125-year history and she’d work to ensure that every Utahn’s voice is heard.

“My late nálí, she gave me the strength and understanding of what a Diné woman is,” she said in an interview outside the Aneth Chapter House on Friday night.

“Not forcibly relocated,” she said, “I always viewed her as this strong, hard, stubborn sometimes, front-forward Native woman, and I was terrified of her because of her bluntness.

“She made me who I am,” Davina said of her nálí, whose teachings and stories Davina never shared with anyone until now.

“She taught me that we, Diné women, don’t go out and shout,” she said. “We don’t yell like that if we want to get our point across.”

Katherine would tell Davina that Diné women should carry themselves in a way that exudes confidence, respect, power and their homeland.

Katherine often told Davina that young people need to absorb and assimilate material because they are the key to change. Ignoring them in the developing world would only stall progress.

Katherine would say society isn’t passing the baton to the next in line in a continuing trend of incremental change in the Bilagáana world.

“She’d say, ‘It’s constantly changing. So, we need our young people to get an education, gain experience, and understand what’s happening because we need them to come home and help us,’” Davina said. “She taught me to speak the truth, speak from my heart, listen from my heart.

“But someone not supporting our Indigenous communities, let them know what’s happening,” she said. “I’m doing just that.”

Davina is a University of Utah alumna. She’s worked in health care, with several nonprofit organizations and documentary filmmakers to share stories about the Diné.

“Then I got involved with land protection,” Davina said. “I did everything possible to get involved, to understand so I can bring that back home.

“I don’t want to continue just with what I’m going to do,” she said. “We’re all in this together, and it’s collaborating with community members, chapter officials, Council delegates, the Navajo Nation president, and other agencies. This is a unified effort.”

Lyman’s complaint suggested her residency status violated the residency requirement to run for the Utah Legislature.

State election officials denied Lyman’s challenge a couple of days later after they contacted Davina and determined she met the requirements.

Lyman, an opponent of both Shash Jaa’ and Grand Staircase, was convicted of federal misdemeanor charges related to an ATV protest ride he helped on federal land in Recapture Canyon eight years ago as a San Juan County commissioner.

Lyman spent 10 days in jail and paid off the $86,000 balance of the restitution ordered in the case for damages the federal government said were caused by the ATVs.

His conviction was wiped out in a pardon by former President Donald Trump in late 2020.

According to the latest campaign finance report, Davina has raised about $33,775 compared to Lyman’s $11,744.

“We aren’t considered when laws and policies are created,” Morgan said in Navajo. “It’s very important that we have representation so that they can speak on our behalf.”

Morgan said the Diné and other Natives residing in the district are entitled to Sooléí Hahoodzoh Bee Haz’áanii.

“We say that sovereignty safeguards us, and we drink Starbucks and eat at McDonald’s,” Morgan said. “We enjoy everything that everybody else enjoys out there, and these services apply to us too.

“We have money coming through our state, yet we say we have nothing,” he said. “You’d think our roads are nicely paved, but we don’t have that with all those resources.”

Davina said her mother is her biggest supporter, and she wouldn’t be where she is today without her.

“When she was a little girl, we’d take her to rodeos with us,” Darlene said. “Young rodeo queens would come into the arena (at those events), and she’d say, ‘Mom, Dad, I want to do that.’”

When Davina was 17, she ran for Miss Utah Navajo Rodeo Queen and earned the title. Later, she earned the Miss Rocky Mountain Indian Rodeo Queen title.

“That’s when we knew she’s going to do a lot,” Darlene said. “When she sets her mind to something, she does it. We’re very proud of her, and she has the voice to do this.”

Morgan said his niece would do a fine job as a state legislator who’ll fight to create opportunities for rural Utahns.

“I’m going to sleep good with Davina in the office,” Morgan said. “It’ll be history-making. If you don’t represent the people in what you want, we will never make those changes unless we throw our hat in there.

“Even if we lose, we’ll do it again,” he added. “We’ll make those changes that we need, and we can have a better life for the future: our kids and generations to come.

“I’m excited for the future of San Juan County,” he said, “and I hope she brings water here too. We can just divert the Colorado River this way. We really need that.”

“I want to hear from the communities (in her district),” she added. “I hope we can understand that we need to move forward, find other forms of economic growth and development, and re-heal the land.”