‘There is no time to rest’: Begay seeking re-election in District 1 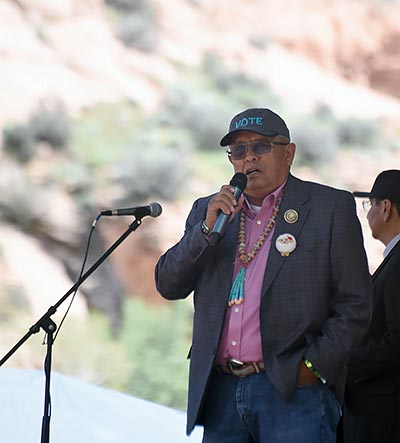 He has a written record of delegates’ absences and lateness from meetings at the Council chamber.

When Delegate Paul Begay Jr. worked at the Navajo Generating Station, one of his tasks was listening in on Council meetings. For eight years, during the 22nd and the 23rd Councils, he sat quietly near the east entryway, took copious notes, and recorded everything the delegates said and did, such as napping and leaving early.

Begay never missed a Council meeting. He was always waiting inside the chamber one hour beforehand to record who showed up early. He said one of his biggest pet peeves is lateness.

Begay knew if he ever became a delegate, he’d always be on time and work hard for his people.

“After gassing up, I leave Page about 3 a.m. when most people are asleep,” he said. “I usually see people until around Many Farms, (Arizona). I text my wife when I get to Window Rock to let her know I arrived safely. And she’s usually getting up at home.”

“We don’t have birthday celebrations, Mother’s Day, Father’s Day,” he added. “Cindy and I communicate by text message – that’s it.”

Begay said he’d like to serve another term for District 1 because he has many projects to complete.

At a recent campaign for re-election rally in Tsinaabąąs Habitiin, he addressed several ambitious priorities over the next four years.

These include completing the Western Navajo Pipeline, annulling the quadrilateral agreement (and creating a new one), paving dirt roads, securing improvement projects at Antelope Point Marina, among others.

He asked people to give him another term to finish what he started nearly four years ago. He said he’d come too far to turn back now and there’s still work to implement plans and agreements and a health-care facility in far Western Navajo.

Begay said the Western Navajo Pipeline is currently underway and is set to complete in about four years.

“That will serve these people who don’t have water,” he explained. “That’s what the water lines are for, and it’ll eventually serve the 18 Western Navajo chapters.”

The cost estimate is around $82.6 million, according to Brown and Caldwell, an engineering and construction firm focused on the U.S. water and environmental sectors.

“We’re in the second year,” Begay said. “This water issue is very important. Even though we (the Navajo Nation) don’t have water rights, we started this because the Nation has been asking the state of Arizona and the federal government for money to do the project.

“What about our own Navajo Nation money? That’s where that $58 million went,” he said.

The Nation received $58 million under a contract-dispute lawsuit – Ramah Navajo Chapter vs. Jewell – on behalf of more than 600 tribes and tribal agencies.

The money was deposited into the Sih Hásin account for critical needs such as infrastructure, community, economic and educational development.

“That’s why this isn’t the time for new leadership,” Begay said. “Projects would take more time to complete under new leadership. It’ll be election time again, and we’d never move from when we started.”

Begay said his plan for the next four years wouldn’t look much different from his first-term agenda.

While a clinic in Bodaway-Gap, a casino – and a nearby public safety facility – within LeChee Chapter, and dirt road paving are in the works, water remains his most urgent concern because these services and businesses would need proper plumbing.

“This coronavirus really hindered the progress of our projects and upended our lives,” he said t’áá Dinék’ehjígo. “Starting some of these projects is difficult.”

Leader for the people

Begay said the longest drive he made thus far as a delegate was to Tóhajiileehé and Alamo, New Mexico.

“I was very surprised what 27,000 square miles really meant,” Begay said. “I’ve been to most of the chapter houses – we have a big Navajo Nation.

“Some people probably wonder where I am during chapter meetings,” he said. “When you become a delegate, you represent your chapters and the entire Navajo Nation, and you become a leader for the Nation.”

“These are why people don’t see me at the chapter meetings,” Begay added. “We (delegates) are working hard for our people. I enjoy my work in Window Rock.”

Begay is running against Helena Nez Begay of Turtle Rock Ranch near K’ai’bii’tó, Arizona, in the general election.