‘This is where it all began’: Nez reflects on childhood 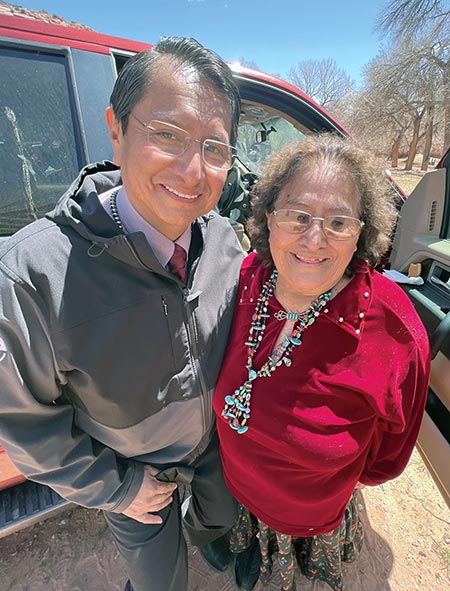 Mabel Nez doesn’t see her son often. She believes the demands of running the tribe might be overwhelming at times, but she knows her son can manage it.

Mabel Nez, 83, said she finds herself missing her son, President Jonathan Nez, when he’s not home in Shą́ą́’tóhí, where he grew up in the canyon and played in the creek with his friends.

“I cannot interfere with his work,” Mabel said in an interview t’áá Dinék’ehjígo.

When asked about the elections and her thoughts about those running for office, she said leadership is hard to define.

“In a crisis, true leaders stand out,” she said. “We made it through the first two years of the coronavirus pandemic, and earlier this year, we entered the third year.”

Mabel said many lost loved ones and that people need to strengthen and pray for one another.

“We’ll always pray for those who’ve lost loved ones,” Mabel said. “My son will continue to lead us through this crisis, this pandemic.

“I’m excited for him and his work,” she said.

Mabel said her son carries her teachings and his late grandparents’ prayers. She believes he uses them for balance as he moves forward, traveling the Navajo Nation, giving speeches, making appearances, and helping people.

“I would like for him to get re-elected,” she said. “He says the Nation has many unfinished projects that need completion.”

Growing up in Shonto (sub)

Jonathan Nez, seeking re-election as president, said his political career began at Shonto Chapter House, where he played in the nearby creek as a child and learned about the Diné government as an adult.

“This is where I used to play while the chapter meeting was going on,” he said. “I used to be all muddy and go into the chapter house, and the leaders used to tell (my friends and me), ‘Get out! You guys are all muddy!’

“But I never thought I’d be sitting in that chapter house where I was elected to public office,” he added. “This is where it all began.”

The president said he didn’t entirely listen to his elders when he was younger. His mother said he was a promising youngster.

“I gave him a lot of chores and asked him to speed up from time to time,” Mable said. “He was a sheepherder and worked alongside his late grandparents at the cornfield.”