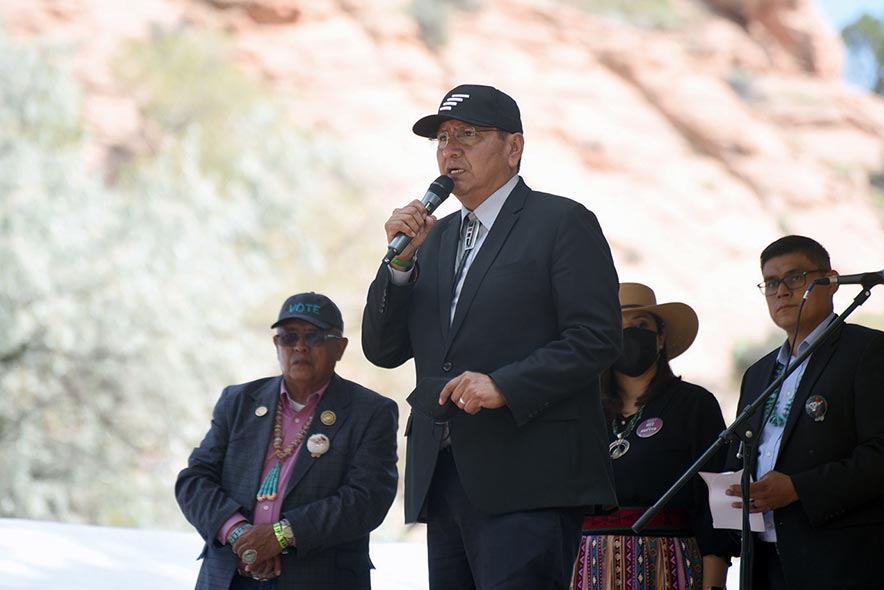 Editor’s note: Next week we will feature candidate for president Buu Nygren and his running mate, Richelle Montoya Chee.

Michelle, 39, who goes by Paulene, said Nez inspired them and told them there would be a way home to help the Diné.

“He talked to a group of young Navajos: Yéigo da’íínółta’ dóó yéigo ‘ádaaht’į́,” Chad said t’áá Dinék’ehjígo, “and then return home where we (must) take charge of the issues and work for our people.

“We (both) returned home, and here we are,” he said. “We’re here to serve our people, our community, and work for you all.”

Chad and Paulene introduced themselves to Nez’s Shą́ą́’tóhí community on Aug. 20, during Red Sun Productions’ “Rockin’ Rally” for the Nez-Abeyta ticket in Shonto Canyon.

Chad is from T’iis Tsoh and Paulene is from Tóhajiileehé.

The road has been challenging, and the journey has been long, but Nez is looking to extend his place in Diné history.

Nez-Abeyta supporters over the weekend danced and cheered at the rally under the cottonwood trees where Nez played as a child. The president thanked them for ensuring Diné Bikéyah will continue to move forward.

“We want electricity and water,” Nez said t’áá Dinék’ehjígo. “We’d like homes to be built with good cellphone coverage in the Navajo Nation. And there is money now for these services, and we leaders will speak for you.”

The tribe last year received a $2.1 billion coronavirus rescue package designed to facilitate the U.S.’s recovery from the economic and health effects of the COVID-19 pandemic.

“There will be jobs for our young people in the Nation,” said Nez.

Abeyta says the term continuity is accurate because it shows someone with a similar vision.

“Being the vice presidential running mate, I’m going to shadow him into the leadership that he is,” Abeyta said. “He brought us through the pandemic. He’s a good president. For that, I’m thankful and support him.

“In the future, I hope I’ll be (a) Navajo Nation president,” he added.

Nez says the Nation was slow to react, but shutdowns and mandates saved lives.

Diné Bikéyah was an epicenter of the pandemic, but the Nation pulled together by embracing masks, testing and vaccines.

The tribe was hit hard by COVID-19 during his first term in office, but Nez said he and his team didn’t shy away from challenges.

“I tell our leaders in Washington, D.C., the Navajo people honored and listened to our front-line workers,” Nez said. “Not many people did that throughout the country. It wasn’t about us, and it wasn’t about our families; it was about communities – our Navajo Nation.”

“We’re going to overcome just like our ancestors overcame the Long Walk,” he said. “We overcame COVID-19 just because we all worked together. Now, we’ve got to look into the future for these young ones.

Chad and Paulene Abeyta have been together for more than 12 years, during which they made it their goal to build a safe and better Nation for their children, Hailey and Myles, and Paulene’s nephews, Joseph and Michael.

Paulene sits on the Tóhajiileehé Community School Board to represent her children and ensure that students have a voice and the resources they need for school.

Paulene said she grew up in Tóhajiileehé, where she and her siblings were raised by her grandmother, Ruth Secatero.

“I know that there is always that story where I go to get my education, and I come back, and the door’s closed,” Paulene said. “That wasn’t the case with President Nez.

“One of the things that inspired me about his administration is that he appointed seven women to his top leadership cabinet to make decisions on behalf of our Nation,” she said.

“One of those women I’m very proud to call my boss, Attorney General Doreen McPaul,” she said.

Paulene said when she applied for an attorney position at the Navajo Nation Department of Justice, she was interviewed by Diné women with legal degrees.

“That was beautiful to see,” she said. “Intimidating, of course, but very beautiful. So, what President Nez is saying and what he’s doing to bring our young people home is very accurate.

“My husband, I’m so proud of him for being selected,” she said, “and he has our family and our community – Alamo and Tóhajiileehé have a lot of history. He has our full support.”

Chad also has a master’s of laws degree in Indigenous peoples law and policy.

Voting in the Nation

Nez says this is a fragile time for the Navajo Nation because of what’s happening in the country, where people march the streets, go to town halls, and demand more from leaders. And he says none of those things matter when people don’t go out and cast their ballots.

“It’s very important that you participate in government,” Nez said. “If you’re 18 and over, you have a right to vote.

“It’s because of our warriors, our ancestors fought for our way of life, our culture, our language – and some of those warriors fought against the U.S. government,” he said. “But they won what’s best for all of us as Indigenous people. One of those is to do your civic duty in voting.”

Nez said he’s encouraging young and first-time voters to research the candidates running for office and ask if they are fit to protect them and advocate for the future.