‘We don’t own the land’: Candidates answer tough questions 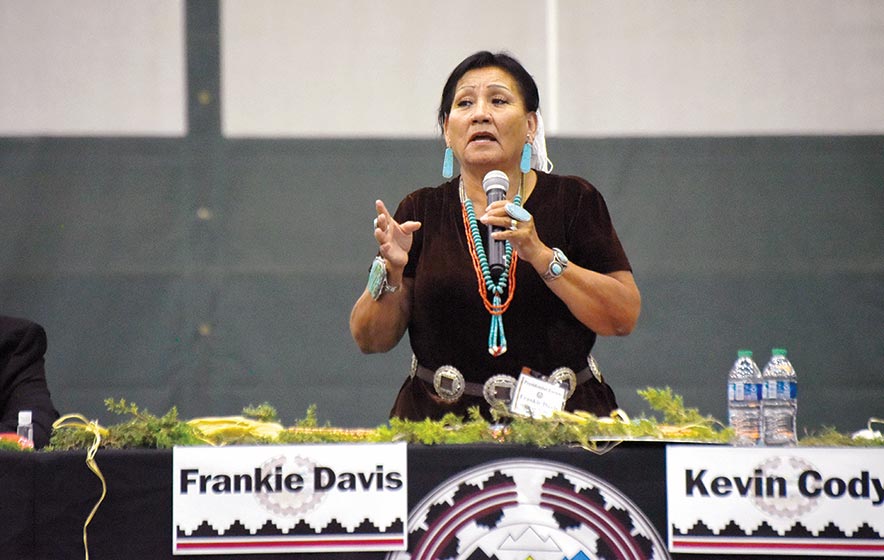 Navajo Times | Krista Allen Candidate Frankie Davis answers a question given by the Council of Naat’aanii member Angie Williams during the presidential forum inside the Warrior Pavilion in Tónaneesdizí on Tuesday night.

Eleven of the 15 candidates appeared onstage Tuesday night at the Warrior Pavilion.

The event, sponsored by Tónaneesdizí Local Government and Tuba City High, was divided into four segments to cover some of the issues in Diné Bikéyah.

Council of Naa’taanii member Angie Williams asked the 11 candidates the following questions, among a list of others. Here are the highlights. Each candidate was allotted two minutes.

Health care has always been an issue in the Navajo Nation, if you become president, what are your plans to improve health care?
Greg Bigman said Tuba City Regional Health Care Corporation has a “good” health-care system. He focused his attention on its new cancer center and upcoming senior center.

“This is the desire of the community with what’s being provided,” he said. “Market is driving demand, not government. So, decentralization is very important.

“Part of health care is making sure that our facilities, we have local control over it, local empowerment,” he added. “This means that all (Native health care) facilities can eventually migrate toward (nonprofit P.L. 93-638). Secondly is creating a structure … in terms of how we can start to simplify that process.”

Several certified chapters are operating under alternative forms of government. If elected, would you support a township government, or is there something greater and better?
Candidate Emily Ellison said when the Nation approaches the economy and economic development, it needs to be controlled.

“(We) look at the Navajo Nation government, it’s a centralized economy,” she said.

“They determine where your resources come from and where it’s going to go,” she said.

“What I support is free enterprise. free markets,” she added. “The barrier that we have there is with our lands. We have our home-sites and our leasing processes. We don’t own that land, we just have a lease to it.” 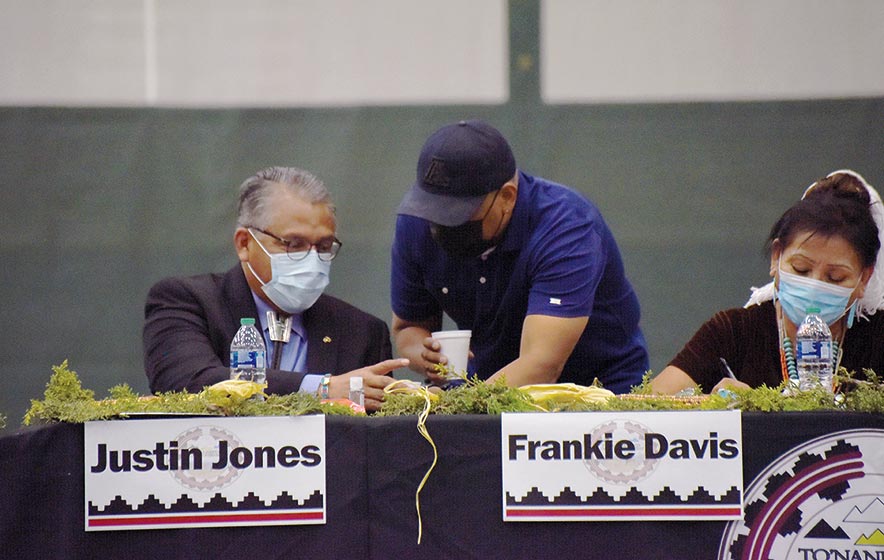 What are your plans to make police enforcement happen (in the Nation)?

Candidate Jonathan Nez said since he became president in 2019, his administration brought the police academy back to the Nation.

“We have also reestablished … the drug and alcohol task force – now it’s called PACE – and we’ve gone out and take some raids on bootleggers and got the people off the streets in many communities throughout the Navajo Nation,” he added. “We have also reestablished the highway safety program so those of you who are speeding, be careful because they’re going to be out there.”

The Nation lacks small businesses due to policies and procedures in starting a business. What are your plans to implement changes for small business?
Candidate Ethel Branch said one of the barriers is that entrepreneurs have only one entity, the Division of Economic Development, to work with.

“We either need to establish or separate those functions within DED so that small businesses have an entity that actually is interested in their development and strengthening and growth,” Branch said.

“Or we invest money for small businesses NGOs (non-governmental organization),” she said, “for example, Change Labs, which has a strong presence here in Tuba City and is doing an incredible job of providing small businesses with the support that they need.”

Branch said the Diné need to invest in the NGOs because it is doing the hard work and it knows how to navigate the system for small businesses.

“They’re making sure there’s value added for the small businesses so that those resources are located all over Navajo Nation,” she added.

Prohibition has been in place throughout our lifetime and it’s not working. Would you consider lifting and allowing legalization of alcohol and cannabis and using tax revenues to generate treatment centers in the Navajo Nation? Where does the alcohol tax generate from casinos go?
Candidate Rosanna Jumbo-Fitch said going back to the traditional teachings, these items were not at home. And the Diné ancestors and older men and women today may have never used these things.

“We see the effects it has on our Nation, we see what it causes within our households, those are some items we don’t want to allow,” Jumbo-Fitch said. “We don’t want to invite domestic violence, … broken families, … health care issues into our households. Yes, maybe there is a benefit and the cost.

“In the long run, is it a benefit to our people’s health and safety?” she asked. “We already have issues in our Navajo Nation in regard to our public safety not being efficient … not having enough staffing.

“We already don’t have enough funding available to support these kinds of causes, why would we promote them? Why would we want to encourage to use these illegal substances within our Nation?” she asked.

Because of the allotted time constraint, Jumbo-Fitch didn’t answer the second part of the question.