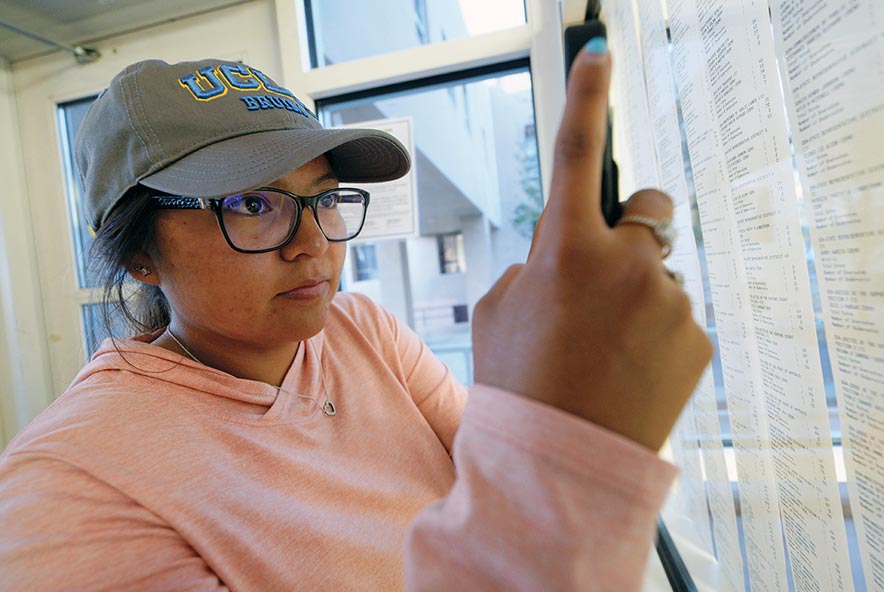 At 22, Lanae Notah understands the power of her vote.

Notah, who recently graduated from New Mexico State University, was at the McKinley County Election Office with her family, keeping a close eye on McKinley County assessor race.

Her aunt, Danielle Notah, a Democrat, was running against five other candidates.

Lanae Notah said she began voting at the age of 18.

“Young voters should be registered to vote,” she said. “I think it is important because we are the new generation.”

Two years before, in 2018, when she turned 18, the Tohatchi native said she voted in the tribal elections and voted for Jonathan Nez, who defeated two-time tribal president Joe Shirley Jr.

Notah said when she voted in 2018, she didn’t take it too seriously and voted based on her parents’ suggestions.

“But now that I’m a little bit older, I do have my college education now,” she said. “And I did take into consideration the qualifications for these candidates.”

She also focused on the McKinley County sheriff candidates, in particular, because of the frustrations relating to jurisdictional boundaries.

“We live on private property, and there have been several instances where we’ve called the 911,” Lanae Notah said.

She said they’ve gotten the runaround from the sheriff’s office and the Crownpoint Police District.

“So we’ll call them back and we kind of just get this run around,” she said.

Because of the jurisdictional issues, Notah said the sheriff’s race is the most important race to her. She attended a debate to better understand what cross-jurisdiction is.

“They do realize that it’s an issue and that is important because there’s so many emergencies that we can’t just keep putting off,” said Notah. “Those calls need to be serviced the right way and not given the runaround.”

James Maiorano III, the current McKinley County undersheriff, won the Democratic ticket and will run against Republican candidate Elreno C. Henio, who is a lieutenant at the sheriff’s office.

Notah said she does intend to take a close look at the 15 Navajo Nation candidates for president.

“I know there are quite a number of people running this year, so I will take a look at that all those qualifications again and pick and see which one is there for the people,” she said.

Being from District 14, she said she’d also be paying attention to the candidates running against incumbent Council Delegate Pernell Halona.

“Again, I’ll be taking into consideration as to who is best qualified because we do need someone in there that’s for the people, so we can change and not keep going over the same old issues and promises that were promised but are never reached,” said Notah.

Being young and a recent college graduate with not much experience, topped with the COVID-19 pandemic, she said finding employment has been a struggle.

With so many Navajo candidates running for various offices, she hopes whoever is elected will work hard to stimulate economic growth and create jobs.

“I know they always stress that education for the youth is important, but also if you’re gonna stress that, you need to provide that opportunity for us to come back and serve the people just like we want to,” said Notah.

Luckily, she’s done an internship with Stanford University, which helped her gain experience in public health, for which she received a bachelor’s with a minor in business administration.

She said she’s been home for the last three years and is looking to move off the reservation to work and gain more experience and eventually return home.

“I do want to go out and explore a little bit and then come back and be able to, hopefully, experience this new change that we’re going to have with the newly elected officials and hopefully gain my step, my foot in the door here on the reservation and return back,” she said.

By the end of the night, her aunt didn’t win the county assessor seat. The voters instead chose Edward Becenti Jr. Notah said her aunt finished third.