Grazing officials are a special breed.

There aren’t too many folks who would take on an elected post with duties that regularly exceed the scope of the job and compensation that is substandard and unpredictable, says Northern Agency Grazing Committee Chairman Reeder Descheny.

Led by Descheny, Northern grazing officials had their turn to vent frustrations and present concerns by invitation of the Resources and Development Committee last Monday at Shiprock Chapter.

RDC Chairman Rickie Nez said that the committee is compiling “all of the information, issues, concerns,” at each Navajo Nation agency in an effort to focus and prioritize their efforts to assist grazing officials with their work.

Moreover, restrictive grazing regulations and practices laid out in the Navajo Nation Code add to the constraints of the job as well as burdening permittees and need to be updated, said several officials. 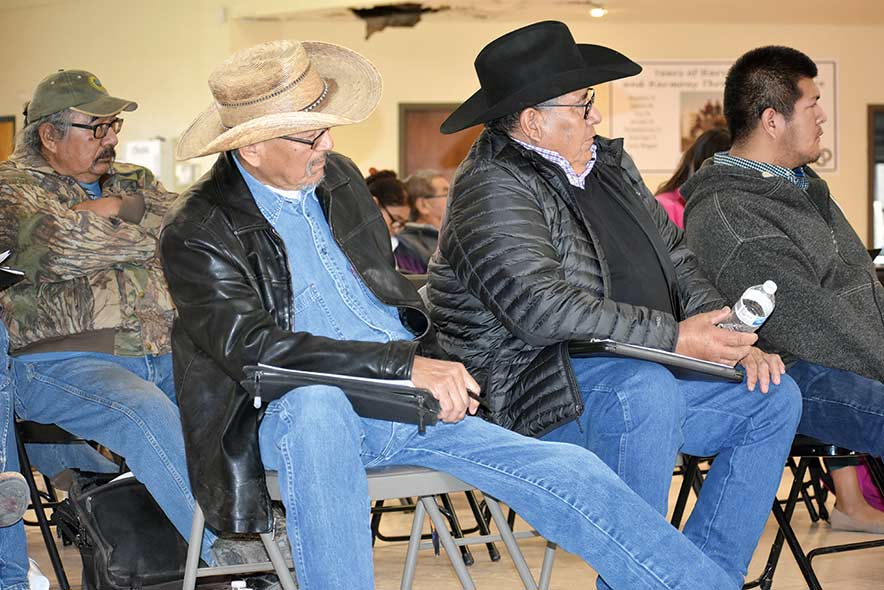 RDC members conceded that facilitating good communications and forging partnerships were paramount to remedying the issues.

They commended grazing officials for their hard work that doesn’t pay like a “real job” and yet requires them to be on call daily.

Representatives from the Division of Natural Resources and the Department of Agriculture were on hand to respond to questions, but the Land Department, Northern Agency BIA, and the Farm Services Agency no-showed.

By the conclusion of the five-hour work session, the recommendation by RDC was to plan a two- to three-day conference with grazing and farm board officials and all of the respective departments and agencies they have to interact with.

The hope is that with everyone “under the same roof,” said Nez, problems that have plagued officials for decades can finally be solved through collaboration.

He said DNR would have to take the lead in organizing the conference that will take place in the spring after the remaining Fort Defiance agency meeting.

Nez said the conference would include a thorough review of current laws and regulations in order to identify changes that might need to be made through legislation.

‘You can scream all you want’

Grazing officials have the responsibility of protecting the rights of their grazing permit holders while upholding the rules and regulations that guide them.

The work can be rewarding for those dedicated citizens who want to help their communities conserve land and water and raise healthy livestock, as well as preserve traditional ways.

It can also be downright exhausting and sometimes even dangerous enforcing regulations that have often been ignored.

One grazing official said in an interview that he now carries a sidearm since he has been threatened and had guns pulled on him on multiple occasions by family members of permittees, all for trying to enforce regulations designed to protect the land and resources.

However, as described by several in their testimony, sometimes the worst part of being a grazing official is having to deal with the combined Navajo Nation and Bureau of Indian Affairs bureaucracy.

And because of a perpetual shortage of Navajo Nation funding and personnel devoted to range, water, forage and livestock management, grazing officials often find themselves falling in between a rock and a hard place seeking support from the departments they need to work with and the chapters they serve, said grazing official Douglas Diswood.

This would include DNR’s Department of Agriculture, Resource Enforcement, Water Resources, Forestry, and Fish & Wildlife departments to mention a few, who grazing officials say mostly come up short when it comes to prioritizing their needs or even responding to requests.

That would be particularly true of the sorely understaffed Resources Enforcement Department that is supposed to help grazing officials enforce rules and regs for things like overgrazing and overstocking.

The agriculture department’s principal planner, Roxie June, said only an estimated 30 percent of all grazing permits are active but there is still overgrazing, which indicates a lack of compliance.

“There’s no enforcement,” said Tsé Alnaozt’i’i grazing official Elouise Brown. “I go beyond the call of duty but when I get to the point where I really need help, nobody comes to help. You can scream all you want, but nobody will come to your rescue.”

She herself has had to chase horse rustlers because no one showed up to help.

Currently Resource Enforcement is made of only 15 rangers to cover the whole Navajo Nation, according to DNR Deputy Director Evangeline Curley-Thomas.

She said funding these types of positions is always a challenge and needs to be prioritized.

‘Moneys from our own pocket’

Grazing officials are paid a pre-tax “stipend” of $800 per month plus $125 each for five monthly meetings that they attend (chapter, land use planning, permittee, district, agency), if those meeting occur and meet quorum. They have to file a separate claim for each meeting they attend.

They are allowed a $200 monthly gas allowance, but many say they spend way more than that on gas. They receive a bi-annual training meeting allowance of $484.

All of their payments are processed through the Department of Agriculture that treats them as taxable “payroll” — except the grazing officials don’t receive the benefits of being an employee.
They are, in fact referred to as “quasi-employees,” said Curley-Thomas, leaving many asking, “What does that mean?”

Furthermore, grazing officials’ payments are often delayed when they reach the bottleneck in the controller’s office, so timely compensation is never guaranteed.

It is for these reasons and others that the idea has been considered to make grazing officials full-time employees of the agriculture department, which would also ensure competency, oversight, and consistency in job performance, said DOA Director Leo Watchman.

It would also likely make their positions more secure with higher pay and could offer standard benefits such as health insurance, use of tribal vehicles, full travel reimbursement, and paid education and training.

Some grazing officials like Tanner Begaye from Burnham Chapter said they would be open to that.

“I do think the grazing officials are overburdened and underpaid,” said Begaye.

He said while he would rather be part of the solution than the problem, the shortage of resources needs to be addressed.

“Most of the time we use moneys from our own pocket just to do our job,” said Begaye.

He said there’s a lot of driving that goes along with meeting with grazing permit holders that the mileage stipend doesn’t cover.

Often, costs associated with livestock and equine removal or round-ups also often come out of pocket, he said.

He added that funding for the DOA equine reward program does not apply to grazing officials, so if they bring in a feral horse they won’t get paid the $100-200 per head reward, which seems counterproductive.

Tanner says it is the responsibility of grazing officials to document notice of violations that are given to permit holders, but unless there’s a court order involved “Resource Enforcement won’t come out” if permittees don’t comply.

“That’s when grazing permit holders realize that they can add more livestock to their herd and overgraze more because there’s a lack of enforcement,” he said.

Regardless, Begaye says he enjoys his job and believes his work is appreciated for the most part.

Other grazing officials say that unless something changes with the compensation piece, they won’t be able to continue with another term.

Brown said that grazing officials need to participate in the budgeting process with the departments and agencies to ensure adequate and timely compensation.

“This is our last year (in the four-year term),” said Brown. “We need to sit down and do that or I don’t want to run again. There is no way you can survive this. I am so in debt because of what I do.”

On the bright side, grazing officials, including Brown, were successful in helping to recover the Farm Services Agency drought insurance payments for livestock permittees and those have started trickling in as of last Friday, amounting to thousands of dollars per payee in some cases.

“I’m so thankful we resolved that,” said Brown.

However, Ernest Diswood, whose wife is a grazing permit holder in Burnham, said there was a meeting in September in Albuquerque with RDC and DNR where the Department of Agriculture agreed to four things concerning Farm Services Agency drought insurance (Livestock Forage Disaster program) benefits:

1) DOA would rescind the “578 Acreage Report,” which was “claiming the entire trust land in New Mexico” as one farm unit and excluded livestock permittees, which was the root of the dispute.
2) DOA would pay late fees assessed to permittees.

3) DOA would pay for any losses of benefits to permitees.

Diswood said Watchman also had stated that the Nation was open to paying, under the Risk Management Agency for USDA, the Navajo Nation drought insurance (Pasture Rangeland Forage program) to permittees that would be a big benefit as well.

Diswood said they are waiting to hear if there is going to be any follow up from RDC on these commitments.