Jasmine Blackwater-Nygren, wife of former Navajo Nation Vice President candidate Buu Van Nygren, has been appointed by the Apache County Board of Supervisors to fill the Arizona House of Representatives vacancy left by the departure of District 7 Rep. Arlando Teller. 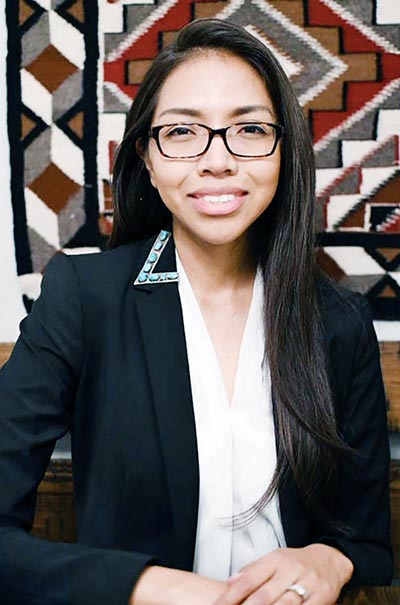 Teller was recently tapped by the Joseph Biden administration as deputy assistant secretary for tribal affairs in the U.S. Department of Transportation. Blackwater-Nygren, who is Hashtl’ishnii born for Áshiihí, said she was “humbled and honored” by the selection. She will be sworn in today (Thursday).

A recent graduate of Arizona State University’s law school, Blackwater-Nygren will be the youngest member of the House at 25, but says she’s prepared for the nastiness of Arizona politics. “Being a Navajo woman, I’m used to being a minority,” said Blackwater-Nygren, who will be in the minority party as a Democrat. “I went to school with a lot of male Republicans … I’m willing to fight.”

But, she added, she is also willing to work across the aisle to get legislation passed.

Blackwater-Nygren said she was a bit surprised to be chosen Tuesday night over some competitors who had more political experience. She believes a video she posted on social media Tuesday outlining her qualifications and platform gave her a last-minute edge. “The supervisors said they got a lot of emails, texts and posts backing me,” she said. “I want to thank everyone who supported me and thank the board of supervisors for listening to the people.”

The newest member of the House says her first priority will be shepherding Teller’s bills through the legislature. “I have a scheduled phone call with him to get up to speed on everything,” she said.

Eventually, she’d like to pursue her main interests – access to health care and improving education for all Arizonans. “Those are not just my issues, they’re core Democratic values,” she pointed out. “I think aligning myself with the core will help me get the support I need to develop and pass legislation.”

In turn, she believes she can “electrify” young voters and bring them into the party. The president, vice president and speaker of the Navajo Nation all reached out to congratulate the young lawmaker.

“We had the opportunity to recognize her and her colleagues during a graduation ceremony when she completed law school and now, we are proud to see her in a position to serve and represent our Navajo people at the state level,” said President Jonathan Nez in a press release. “We always tell our young Navajo people to get their education and help our people,” he said, “and that’s what Rep. Blackwater-Nygren is doing. As the legislative session continues in Arizona, we are looking forward to working with her on many issues.”

“It’s very exciting to see so many of our young professionals pursuing their education and giving back to our people in many ways,” stated Vice President Myron Lizer. “I look forward to working with Rep. Blackwater-Nygren to advocate for issues that benefit our Navajo people.”

Speaker Seth Damon said he was “pleased to see the seat held by a member of the Navajo Nation maintained with this appointment,” but added he was sure she will work to serve her entire district, one of the largest in the country. “We also thank former representative Teller for his service and wish him well in his new role in our nation’s capital,” Damon said.