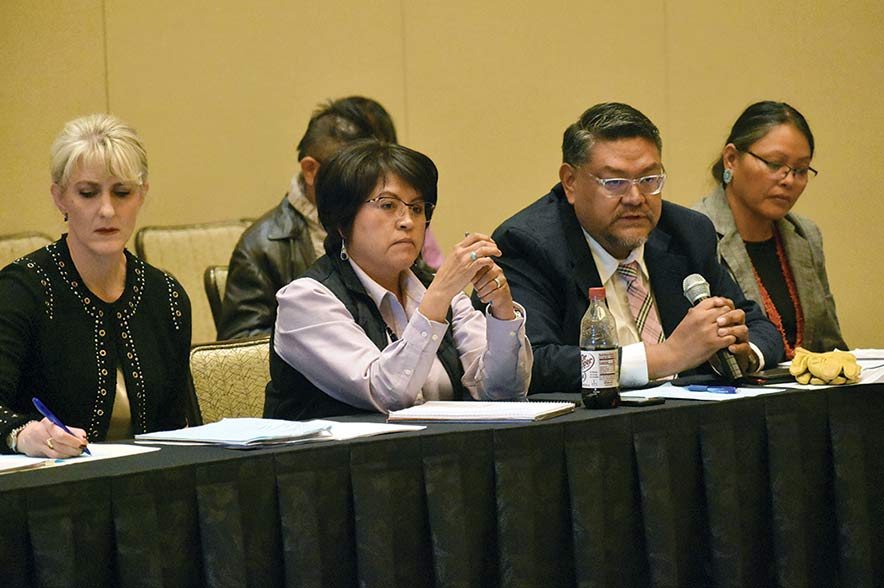 A work session on Navajo taking control of the state-run Medicaid program “started a dialogue,” but more questions need to be answered, Speaker Seth Damon said.

The intent of last Friday’s Naabik’iyati work session at Twin Arrows Navajo Casino Resort was to hash out questions related to the proposed partnership between Naat’aanii Development Corp. and Molina Healthcare. The partnership would create an Indian Managed Care Entity in New Mexico next spring.

However, only 10 delegates showed up — only two of whom represented New Mexico chapters.

“There’s a lot more information that needs to be presented to Council because there weren’t enough delegates here,” said Delegate Carl Slater, who is a member of the Health and Human Services Committee.

At the end of the meeting Slater took action, initiating paperwork to drop a bill that will launch the legislative process.

Slater said the intent of the bill is to affirm the Nation’s position that NDC and Molinashould contract with the New Mexico Human Services Department to enroll 50,000 to 75,000 Navajos in Medicaid, the state-run health care program for low-income people.

“This is a positive outcome in that the deliberations before the Navajo Nation Council will be public and that the communities will have the opportunity to become more informed,” said Milton Bluehouse, deputy chief of staff for the president’s office.

“I think that there’s an opportunity for us to continue this dialogue and we’re going to insist on NDC answering the questions that the president’s office and (Health Division Director) Dr. (Jill) Jim have developed in order to affirmatively push the legislation through,” said Slater.

Most delegates are just getting up to speed on the IMCE plan and how it will work. To date, NDC and Molina have presented to the Health, Education and Human Services, Budget and Finance, and Resources and Development committees, as well as a public state-tribal consultation meeting on Oct. 9 in Gallup.

Some delegates at Friday’s work session expressed disappointment that President Jonathan Nez hasn’t shared more about his position on the proposed IMCE.

“Where does President Nez stand on this initiative for our Navajo people?” asked Delegate Vince James. “As a leader he should say, ‘This is where I am with my vice president.’ He’s not doing that and that’s very disturbing.”

Bluehouse said that Nez’s position is to “receive information, conduct research, and learn as much as possible” and to understand what “the Council’s conversations are on this” before any decisions are made.

Bluehouse emphasized Nez wants to work collaboratively with the Council when it comes to this project.

James also pointed out that the proposed IMCE is only for Navajo New Mexico residents and asked if there were similar plans in the works for Utah and Arizona.

“I thought the purpose of today was to look at a finalized draft, but I guess it’s not,” said James to NDC and Molina representatives.

“Where is your platform and your plan and what kind of jobs will be created?” he asked. “Has a public forum been done? How are you going to get the message out to the elderlies? What do the ’638s think? What does IHS think?”

Delegate Elmer Begay said he wanted to understand from the Department of Justice how the procurement process works with Section 17 corporations like NDC.

“The Navajo Nation government creates these enterprises. Is there a procurement law that they need to be abiding by?” asked Begay. “Is it because of Naat’aanii’s structure that they can choose whoever they want to work with? Are there other options we should be looking at?”

Delegate Eugene Tso spoke to the trust obligation to provide health care in the Treaty of 1868 and asked why the Nation should be considering other health-care plans.

“If the treaty’s no good what happens to the trust responsibility?” asked Tso. “We don’t have to ask anybody else to help us. IHS is supposed to be there for us.”

The president’s office also has a list of questions, some of which have been answered to date by NDC and Molina.

Following delegate Tso’s comment, Bluehouse posed the question of whether additional monies coming into the Navajo health care system through programs like the proposed IMCE could pose a risk of reduction in current IHS funding.

“Four-hundred and seventy million dollars (the estimated annual revenue from the IMCE) should not blind Navajo Nation leadership from the primary concern that health care for Navajo people is not adversely impacted,” said Bluehouse.

In the work session Dr. Jill Jim presented a long list of technical questions to NDC and Molina leadership as well.

In summary, she asked:

• What is the IMCE benefits design, what are the value added services for the Navajo people, and would there be providers on the Navajo Nation?
• How, specifically, will the IMCE benefits package reflect Navajo culture, beliefs and traditions?
• What reimbursement models will be used and how will they impact IHS and tribal health organizations?
• How will the improved social determinants of health be implemented, including proposed nutrition food boxes, housing support and traditional healing.
• What is the plan for passive enrollment and how it will impact the Navajo people and their options for Medicaid coverage?
• How will the IMCE work with the Nation in regards to contracting non-emergency transport companies?
• What type of reporting will the IMCE provide to NDOH?
• Will there be an opportunity for a public comment period?

Finally, Jim asked when the Nation receives dividends/profits from NDC, where in the Navajo Nation health system will the money be distributed?

Bluehouse added that the president’s office has yet to receive a breakdown of how much money NDC and Molina will make, respectively, in the partnership.

Concerns came up among a couple of delegates about whether the questions provided by the executive branch were meant to stall the IMCE approval process for political reasons.

“I can assure you my work is not political,” said Bluehouse. “I would petition, implore, the Navajo Nation Council, in its legislative wisdom, to answer the questions provided by Dr. Jim for the benefit of the 50 to 75,000 people who stand to be impacted by this.”

Bluehouse also said that there is currently sensitivity surrounding the activities of Navajo Nation enterprises in the wake of Navajo Transitional Energy Company’s controversial purchase of coal mines in Wyoming and Montana.

“People are hyper-aware and hyper-sensitive about what a corporation of the Navajo Nation will engage itself in and what liabilities and responsibilities that entity would have when it comes to the well-being, health and resources of the Navajo people,” he said.

NDC’s Interim CEO Robert Joe says as soon as the approval for passive enrollment is received from the president’s office, they can receive authorization from the state, and NDC-Molina can move forward with their plans.

“We’re ready to launch. We’re ready to go,” said Joe. “The jobs and revenues of this MCO are directly dependent and a function of the amount of people signed up with it.”

Joe assured delegates that enrollees will still have “freedom of choice” because once automatically enrolled they do have the option of opting out.

Blue-house asked what would happen if a large amount of passive enrollees decided to drop out.

“Then what happens to the Navajo MCO? Will it remain feasible?” he asked.

Damon said he has the same concerns.

Regarding outreach to the people, Joe said that in order to go out into the communities and communicate with chapters the state has to give NDC/Molina the authorization first.
“If the president approves passive enrollment and the state gives us the go-ahead then we’ll be authorized to proceed,” said Joe.

Joe explained that NDC is presently mandated by charter to give 20 percent of profits to the Navajo Nation. Of that, 28 percent will go to the Permanent Trust Fund and 72 percent to the general fund, he confirmed.

He said what the Council decides to do with those monies is up to them.

Joe explained that Navajo Nation procurement law applies to the government and enterprises but not to corporations like NDC.

“They are a separate and distinct entity, separate from the government,” he said.

Delegate Thomas Walker stressed the seriousness of all of the questions being brought up related to regional Navajo health care needs, disparities, and resources.

“Those are questions we should focus on and pay great deal of attention to the responses,” he said.

Walker and Elmer Begay recalled a time a couple of decades ago when leaders and medicine people spoke about self-determination and predicted that in the future the Nation would undertake its own health-care delivery system.

“This is today,” said Walker.

“We should be careful about big, grand ideas,” Walker cautioned. “We need to be responsible and learn as much as possible.”

Begay said that the medicine people had predicted that there would be a lot of “beeso” involved and that they had warned to be careful about that.

“Somebody’s going to be getting rich,” Begay said they told him.

“’Be very careful,’ they cautioned,” said Begay. “’Is there going to be better service? Is it going to be different?’”

Walker stated that instead of arguing and pointing fingers everyone should find ways to consider “how to make this work and make this happen.”

He said leaders have to remember that it’s very important to go by the legislative process.

“Our tribal government is a resolution form of government,” said Walker. “At the end of the day, if tribal Council consensus approves resolutions and president gives his signature, then that speaks for the Navajo Nation.”

“Let’s put this in the hopper and see what happens,” concluded Walker. “If it goes it will go, if it doesn’t it doesn’t.”