Arizona state representatives Arlando Teller and Myron Tsosie, both Diné, were blindsided over the weekend by a barrage of calls from family members and friends asking if they were OK. 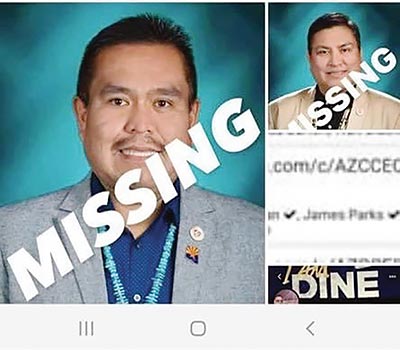 They quickly traced the concern back to a Facebook post by one of their constituents, Kelly Rael of Show Low, Arizona, who describes herself on her page as an “ornery but mostly peaceful patriot who loves America, its people and most importantly GOD!”

Rael had posted a meme with pictures of Teller and Tsosie overwritten with the word “missing,” in imitation of a missing person flyer. The text read, “Missing 2 Diné Democrats! The two were last seen in the Chinle area. When I checked on Rep. Teller’s well-being, someone blocked me. If you too have concerns on the well-being of these two Arizona State Legislators, please contact their offices.”

Rael said in a follow-up post she was trying to make a statement that the Diné legislators are ignoring the southern half of District 7, which is mostly white, but Tsosie and Teller said a lot of people took the post literally.

“I had family members calling me, crying,” Tsosie said in a video he posted responding to the meme, which he called “disrespectful, unprofessional and misleading.” He added he called the police to make sure they knew not to send out a search party.

Teller added that Rael’s concerns are not valid. “I’ve been meeting with constituents in her area of Show Low, I’ve been out to Springerville, all over the south end of our district meeting with businesspeople who are concerned about Governor (Doug) Ducey’s requirements for reopening,” he said.

In fact, Teller on Tuesday sent out a press release saying he had been trying to set up a meeting between the businesspeople and Ducey but Ducey’s staff told him the governor was not attending any “events with large crowds” because of his own executive order against such gatherings.

“But then I saw him (on television) at the Republican National Convention, not wearing a mask,” Teller said.

He said the meeting he was planning would include only 25 to 50 people and social distancing would be practiced.

Rael had also mentioned in her follow-up post that Teller and Tsosie were “ignoring” her invitations for them to debate the Republican candidates for their house seats, David Peelman and Jim Parks.

Teller said he’s not ignoring her, he just hasn’t decided yet whether to attend the debate. “I was going to look at the list of questions and see whether it’s worth my time,” he said. “I just entered the U of A law program, so between that and my work at the Legislature, I’m pretty busy.”

Tsosie did not respond to a Facebook Messenger message by deadline, nor did Rael.

In a video posted on Facebook, Rael said she had received some angry responses to her criticism of the two legislators and accused them of “sending a Navajo mob to come at me.”

While Tsosie had asked his constituents to contact Rael and ask her to take down the “missing” meme, Teller said he has been encouraging his supporters to ignore it and move on. He said he has blocked Rael on Facebook and hasn’t seen her latest posts, nor the responses.

“The best way you can support us is just to vote,” he said. “Arizona is turning blue and the Republicans can’t stand it. This is just a desperation move from people who are losing power.”