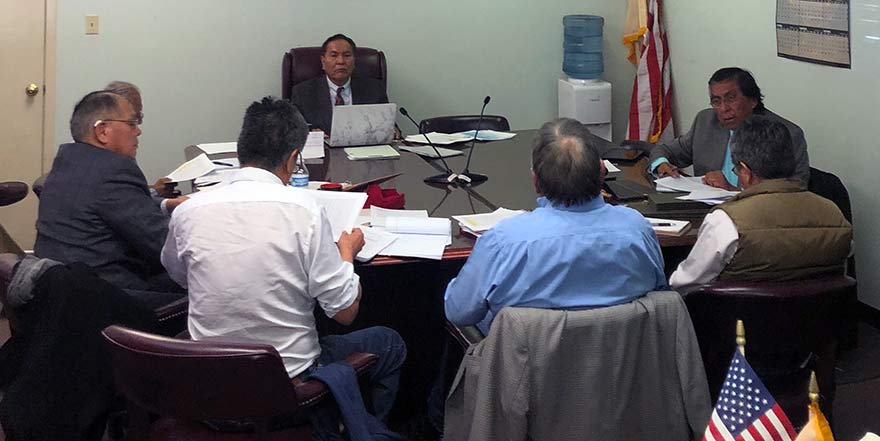 Arlyssa Becenti
Council Delegate Leonard Tsosie, back right, speaks at his hearing Friday. Tsosie had challenged the 2018 election, which he lost.

Council delegate Leonard Tsosie is ending his delegate career the way he began it: by taking it to the courts.

After a five-hour hearing at Office of Hearings and Appeals, Hearing Officer Richie Nez dismissed with prejudice Tsosie’s case. The delegate, who blamed his recent loss to Daniel Tso on a bungled election, chose to defend himself pro se, and went up against Legislative Counsel attorneys Ron Haven and Lorenzo Curley, who were defending the Navajo Board of Election Supervisors and Navajo Election Administration.

Tsosie was one of eight individuals, mostly current delegates, who filed election grievances against their opponents, NBOES, and NEA. Tsosie’s grievance was the only one that was granted a hearing.

From the beginning of the hearing it was evident that it would be a tempestuous ordeal with Tsosie trying to get Haven, Toledo, and Nez to recuse themselves; as well as Tsosie unable to get his key witnesses to show up; Tsosie spewing allegations that could not be proven, and other issues. Tsosie was able to have Toledo recuse herself but she was allowed back on as Tso’s representation later on in the hearing. In the end Tsosie deemed the whole hearing “unfair.”

“If we added the numbers we wouldn’t be here,” said Tsosie. “To me it’s futile to proceed in an unfair hearing.”

Before Nez dismissed the complaint, Tsosie asked for a summary ruling, which was denied. Nez asked Tsosie if he wished to proceed with the hearing after denying the request, but after Tsosie said it was “futile” to proceed the Hearing Officer said he would have a written order within five days.

“I’m denying your motion for summary judgment,” said Nez. “Based on your statement it will be futile to continue to move forward, I have no choice (but) to motion to dismiss with prejudice.”

Tsosie had started his legislative career with a court battle as well, fighting to keep his New Mexico State Senate seat as well as his Council seat. The Navajo Nation Supreme Court had denied that motion.