If there was a year for local teams and athletes to make their marks on the sports world it was 2019.

When looking back at the dozens of sports stories I wrote in 2019, I started to see a trend. I found that the stories that generated the most engagement and excitement were ones about our very own local student athletes. We sometimes have stories that reach beyond the reservation lines, but this year, our local high school athletes made headlines and did so consistently. I was proud to be reminded of the wonderful accomplishments of our local student-athletes, and to know that there was plenty more for them to accomplish.

While thumbing through stories for this year, I was able to relive the excitement felt when witnessing and writing each story. It was a year of thrills, a year unlike others, and I can’t wait to see what our very own student-athletes have to offer in 2020. 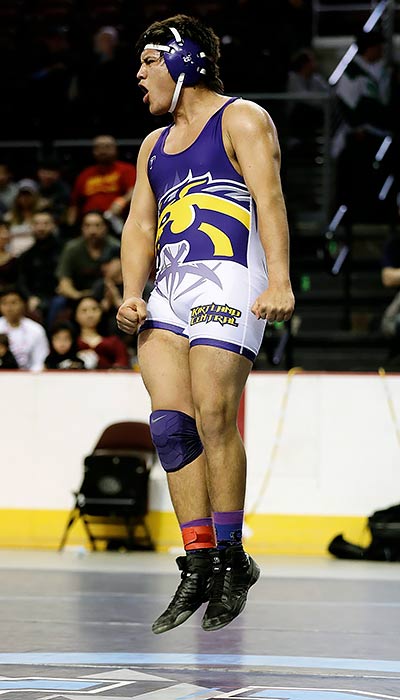 Dozens of wrestlers grappled throughout the year in hopes of becoming a state champion and Kirtland Central wrestler Jarryd Pollard was one of them.

Pollard turned heads this season, winnng his first and only state title at 220 by a 5-3 sudden victory in overtime.

Pollard, who finished the season with a 48-4 record, said it was something he longed for.

“It felt amazing. I always dreamt of it, even my sophomore year, even when I did bad, I always wanted to be a state champion,” he said.

Pollard started wrestling when he was in the seventh grade and worked his way up to earning the title that defined his high school career. He fell short of placing in the state meet as a freshman but returned to the competition every year after and moved up the ladder.

Pollard, who is Diné and Ojibwe, credited the hard work he put in in the off season with earning the state title and his coach John Sandoval said it was rightfully so.

“He’s just a great role model. If I had 14 Jarryd Pollards on my team, we’d be amazing as a team,” Sandoval said.

For the second year in a row, local female wrestlers took to the big stage and earned gold at the 2019 New Mexico National Guard State Wrestling Championships exhibition tournament. Gallup High School crowned its first girls’ wrestling state champion in over 30 years. Neveah Young finished first at 113 pounds by a 10-9 decision. Young, a freshman, finished the tournament 3-0 and 6-0 overall. She said he was more than happy to be the first female state champion for Gallup in many years.

“We have a tradition at our school in the wrestling room: If you place at state you get your name on the wall with your weight class and your division, and to be the first girl on there since 1962, it’s pretty exciting,” Young said.

There were a lot of ups and downs in district 1-3A for boys’ basketball in New Mexico. Actually, it was a roller coaster ride for all teams involved. Those at the bottom of the district managed to find their way to the top and gave top teams a run they didn’t see coming. Thoreau was one of those teams.

The Hawks defeated favored Navajo Preparatory School 48-45 in the district tournament championship to earn the No. 16 seed for the state tournament.

The team fell short in the first round of the state tournament, but that was hardly the talk of the town. Thoreau was given the fourth seed in the district tournament and worked passed Zuni, upset Wingate in overtime, and eventually met Navajo Prep. It was a feat that solidified Thoreau’s faith in itself and its abilities. It was also an accomplishment that their coach Andrew Gordan said he knew they had in them.

The Newcomb High School Skyhawks have been the talk of the town for a few years now. They are no longer the forgotten team; the state knows who they are and what they can do, especially since they earned a runner-up title this year.

The Skyhawks fell short to Pecos 58-37 in the 2A boys’ championship game in March. They were seeded No. 3 and Pecos was No. 1. It was the first championship game appearance for the program and its first second-place trophy earned in the school’s 38-year history.

But the real thriller was the semifinal game when Newcomb defeated Mesilla Valley Christian school 50-48. Newcomb’s Deondre Begay drove the lane with eight seconds on the clock for the win, giving them a ticket to the championship game.

As always, local teams showed up to compete in the annual basketball state championships, but in 2019 more than a few showed up to do more.

Kirtland Central, Santa Fe Indian School, and the Mescalero Apache girls’ basketball teams competed on the highest level there is for high school state basketball and turned some heads. However, their efforts all led to second-place trophies, which were far from defining their efforts.

Kirtland Central fell short to Los Lunas 49-43. Kirtland Central was seeded No. 1 going into the tournament and the Lady Tigers No. 2. A win would have earned the program its 20th  state title. Santa Fe Indian fell short to Robertson 62-46 and ended its season 27-6. The team suffered great loss within their team and community as two of the teammates lost a family member. It was enough to affect their mentality. The young Mescalero Apache team fell short to Pecos in overtime 53-46.

All three teams put up a fight throughout the tournament and proved the strength of area girls’ basketball.

6. From New Mexico to CU

In late March, it was finally time to bid esteemed high school runner Kashon Harrison good luck as he signed his national letter of intent to run for the University of Colorado in Boulder. Harrison, a distance runner for Kirtland Central High School, was offered a full scholarship and became a Division I runner.

He had offers from Syracuse University and Oklahoma State University, to name a few, but found a home in Boulder.

Harrison said it was the best decision for him.

Harrison earned back-to-back cross-country state titles as a junior and then a senior. He also picked up a number of gold medals in track and field. Not to mention he was named Gatorade Runner of the Year as a junior.

7. A Rough Road to Division I

Many college athletes find themselves defeating odds to achieve their dreams, but few have had to face what Quynne Huggins did.

Huggins, who is Diné and African American from Fort Defiance, worked her way to earn a spot on Division I team University of Texas-Rio Grande Valley’s team after being diagnosed with thyroid cancer.

Huggins grew up in Phoenix and signed with Utah Valley University before landing back in The Valley at Mesa Community College. At Mesa, she put in the work and battled cancer to land in Texas.

She said battling cancer allowed her to accomplish her lifelong dream.

“I know I’ve always had the dream of playing overseas of any type of professional basketball; this is exactly what I want to do,” Huggins said. “The situation, this definitely has driven me to keep that in my vision.”

With a successful cross country season the year before came a successful track and field season for most distance runners. But that was not the case for Rehoboth Christian School runner Anna Huizinga.

A promising freshman, Huizinga earned gold medals in the 1,600-meter run and 800-meter run in the A-3A state championships, but had her medals revoked after being disqualified by the New Mexico Activities Association due to a technicality. She was said to have exceeded the distance she was allowed to run in a combination of running events.

It was a heartbreak that she, her coach, and teammates didn’t see coming.

“It’s frustrating and it’s unfortunate that Anna had to lose her medals through a technicality,” Collier Kempton, Rehoboth coach, said. “I didn’t really feel like it was a reasonable punishment for the infraction.”

While Huizinga came to terms with her tough losses, others celebrated their winnings.

It was weeks before August when news came that Navajos made it to Netflix. The major video steaming service chose the docuseries “Basketball or Nothing” to air online beginning in August. The docuseries is a product of producer and professional Navajo golfer Rickie Fowler with the help of former professional Navajo golfer Notah Begaye III. A film crew followed the Chinle High School boys’ basketball team throughout an entire season, providing insight into the team on and off the court. The series was made up of six episodes and aired Aug. 2.

One of the players featured in the video was Chance Harvey, who at the time of the release, said he wasn’t sure how the world would react.

“It kind of makes me nervous, because during the documentary it was basically how I grew up,” he said.

The film has been since become a marvel, providing insight into the lives of Navajo people and the social issues they face.

It was nothing short of an exciting cross-country season this year, mostly thanks to a soccer player turned runner who goes by the name Triston Charles.

Charles earned his first and only cross-country state title as senior, but it was a win that did not come easy. Charles raced neck-to-neck with Clovis runner Jerrick Maldonado and won according to the timing device, but shortly after the race was told he finished second. After weeks of reliving his crossing the finish line and looking at videos that proved he was in fact the winner, the New Mexico Activities Association reversed the decision and awarded him the gold. Maldonado also had a hand in the change. After seeing footage of the race, he was certain the win was not his. Charles was later given the gold medal he earned.

Though his heartbreak did not last long, Eldorado’s Jasmine Turtle-Morales’ did.

Turtle-Morales fell short in the championship race to Cleveland’s Leah Futey in 18:45.65. She was favored to win but Futey put up a tough challenge.

Turtle-Morales had perhaps the most heartbreaking finish of the state championship event.