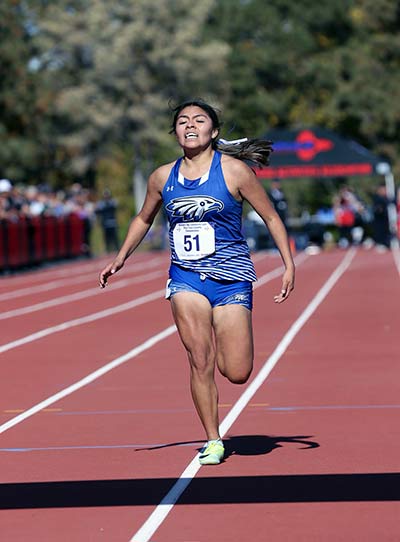 Special to the Times | Delbert Damon Laguna Acoma's Erica Martin won the Class A-2A state cross country race in Albuquerque on Nov. 5 with a time of 20:20. Martin was named the Times’ Runner of the Year.

The Chinle senior plans to run at the collegiate level and she’s currently assessing all of her scholarship offers.

As one of the area’s top runners, Bia won six of her races this year as she earned the distinction of the Times’ Runner of the Year along with Laguna-Acoma harrier Erica Martin.

“I’m just so happy to get this,” Bia said. “To be honest, I was thinking it was gonna be another runner, so I’m surprised.”

Bia, who placed second at the Arizona Division III state meet, credits her teammates and coaches for inspiring her.

“I feel like we all pushed each other and we always encouraged each other,” she said. “We all had the same positive energy and that put me up there.”

After having a consistent year, Martin came on strong at the tail end of the season, winning her final two races.

One of those races earned her a spot atop the podium at the New Mexico Class 1A-2A state meet as she finished the 5K race in 20:20.1 on the Albuquerque Academy course.

She beat her pervious PR at Academy by a minute and 36 seconds.

“Last year I got 17th,” said Martin who was third at the pre-state preview at the Academy Extravaganza with a 21:56. “I really didn’t do that good that year because of COVID and I got sick. Then I went out too fast.

“This time I knew I could do it. I put my mind to it with all the practices that went forth to this meet that really paid off a lot. My coach Lacey Natseway pushed me and thanks for my family for always supporting me.”

Behind a pair of state championship teams, Chinle’s Beatrice Begay and Santa Fe Indian School’s Lloyd Padilla were honored as the coach of the year.

Returning all seven runners from last year’s state runner-up team, SFIS packed its first three runners in the top eight spots and all five in the top 13 to finish with 40 points and on top for the first time since 2003.

The Lady Braves held off in-town rival Santa Fe Prep, which squeezed its first four runners in the top 10 points, to finish second with 56 points. Santa Fe Prep was hurt by its fifth runner who was 28th.

“It was an amazing finish,” Padilla said following his team’s first-place win. “They have the game plan already. They set their goals at the beginning of the season and we just worked towards it. The whole Santa Fe community came together and pushed them and encouraged them and pulled it out.”

In Arizona, the Wildcats ran away with the team title as it scored five runners for 61 points, outpointing reserve champ Salpointe Catholic as the Tucson school finished with 91 markers.

“This is wonderful,” Chinle coach Beatrice Begay said. “It’s been a good chase. Hard work on their part, but it’s a great feeling.” 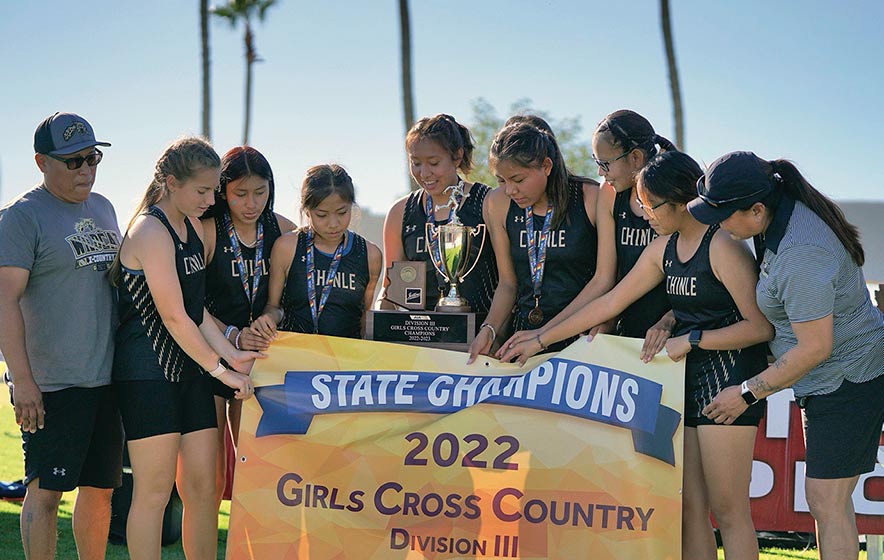