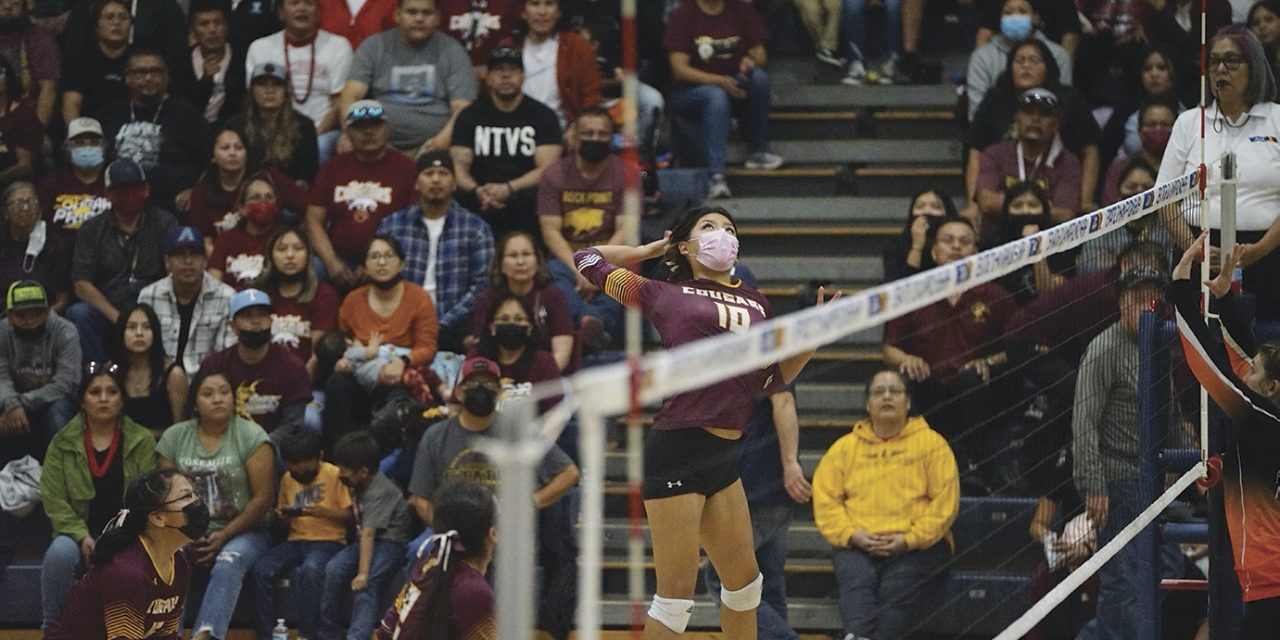 Navajo Times | Quentin Jodie Rock Point Lady Cougar Arianne Begay goes up for a hitting attack against top-seeded Williams on Nov. 5 in the Arizona 1A state title game. Begay helped the Lady Cougars to a second consecutive state title and she was tabbed as the Times’ Player of the Year.

Nobody didn’t expect much from the Alamo Navajo volleyball team at this year’s state playoffs.

As one of the lower seeded teams for the New Mexico Class 1A state volleyball tournament, the Lady Cougars put the school on the map with a Final Four finish under second-year coach Danielle Gordon.

She was named coach of the year along with Rock Point’s Kyle Arthur and Laguna-Acoma’s Esther Lorenzo as the latter two coached their teams to another state title.

“I just feel very grateful to have the opportunity to even coach in the first place,” Gordon said. “Sports is a big thing for me and to be a part of that for the girls is just amazing.

“I’m grateful to even be considered,” she added.

Courtesy photo
The Alamo Navajo volleyball team surprised the Class 1A field with a Final Four finish under the tutelage of second-year coach Danielle Gordon. With that finish, Gordon was named the Times’ Coach of the Year.

The Gordon-coached team came in as the No. 11 seed and they knocked off No. 12 Ramah, No. 9 Santa Fe Waldorf and No. 3 Animas to reach the state semis against top-seed Melrose.

And although they were swept by Melrose, Alamo Navajo gained a lot of believer during its three-day run at the state playoffs.

“The girl wanted it, and they wanted to go in there and show what they got,” second-year Alamo Navajo coach Danielle Gordon said. “And the whole time everyone was asking, ‘Where’s Alamo Navajo?’ during the state tournament. You know, we showed them who Alamo Navajo was and it was really awesome to witness.”

Arthur guided the Rock Point Lady Cougars to a familiar place by winning the Arizona 1A state crown for the second year in a row.

This is Arthur’s second COY award and he gave credit to his players and assistant.

“I appreciate this, but like I said last year this is not an individual award,” he said. “It took a lot of hard work and it was a team effort and they all made it happen.

“I’m glad that we got the state championship again,” he added. “I mean, we won back-to-back titles and not too many schools can say that.”

Behind a hefty front-line, Lorenzo coached a senior-laden Laguna-Acoma team to another state title. With four players towering at least 5-foot-10, the Lady Hawks swept 2A powerhouse Texico in straight sets in the state finals.

“It’s bittersweet to see them leave. We won last year for our first state championship; to win it back-to-back, it’s that much sweeter,” Lorenzo said. “It means a lot to win back-to-back state titles and to have everyone out in our community. It means a lot to these girls to have the support and love they get.”

The recipients for the players of the year went to Rock Point’s Arianne Begay and Laguna-Acoma’s Silvia Gedmen.

“I’m really surprised that I got it,” Begay said. “I mean, they were a lot of other athletes out there.”

“She’s a phenomenal player and everyone has seen that on the court,” the Rock Point coach said of Begay. “It was her senior year and she wanted to go out with a bang. She was one of the main components for us to go back-to-back.”

Standing at 6-foot-2, the Laguna-Acoma middle hitter said she grew six inches since her eighth grade year and before she reached high school she was asked to join the volleyball and basketball teams at Laguna-Acoma High School.

“I like everything about playing—the sisterhood within the girls,” she added. “We just click. It feels good to have a side family—your home away from home to where you can be yourself and be around other people.”