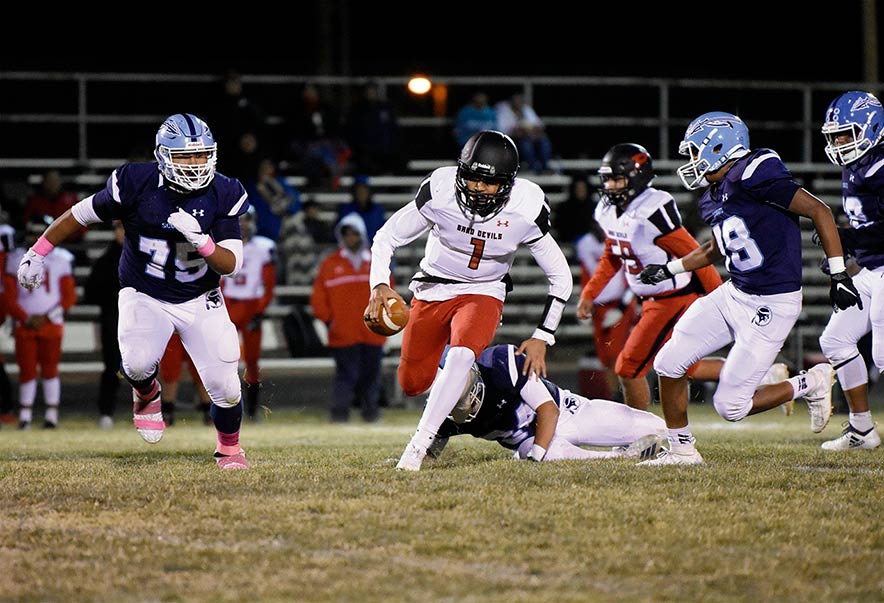 File photo
Window Rock’s Caleb Dickson (75) runs after Page quarterback Robert Smith (1) during a 3A North contest last fall. The cancellation of the 2020 fall sports season is concerning for the Dickson family as Caleb was hoping to earn a scholarship.

By David Smith
Special to the Times

Many changes are happening within the schools in the Navajo Nation, both in academics and athletics.

For some schools, this includes taking online classes and having no sporting events.

In an attempt to maintain student safety during the ongoing coronavirus pandemic, individual reservation schools like Chinle High and Window Rock High have temporarily closed their campus and canceled all fall sports.

Although student safety is a priority, the turn of events is nonetheless troubling for high school seniors and college freshmen.

Caleb Dickson is a talented football player for the Window Rock Fighting Scouts. The high school senior has been playing the game since the age of seven.

He has accrued numerous awards as a 3A guard and has received much recognition for his skill.

At the beginning of this year, Dickson began his college showcase by taking part in the All-American Desert Regional on March 4 and performed at the State Farm Stadium in Phoenix, home of the Arizona Cardinals.

According to Blue-Grey’s online post by Sean Ceglinsky, Caleb Dickson was noticed by the coaching staff and “impressed onlookers.”

The next showcase would have been in June at the South West Super in Dallas, Texas. However, the event was canceled due to the coronavirus pandemic.

For over a month, the Blue-Gray organization was silent. Then a week ago, Caleb received a letter saying that the All-American Combines will resume in January. Until then, there are no guarantees of Caleb receiving any scholarships and no word of him being noticed by college scouts.

This is concerning for Caleb and his family, said Caleb’s father, Rudy Dickson. With this being Caleb’s senior year, he was hoping to get scholarships and to continue to play the sport that he loved.

“It’s something he was really working hard to get, and the pandemic made it harder,” Rudy said. “But we’re going to try and make it (college) happen.”

With classes now online and no immediate resources available for him, Caleb has been training on his own. With gyms closed and a curfew in effect on the Navajo Nation, his options are limited.

The virtual classes he is now taking are a new concept for many families and taking a while to grasp. With limited internet service, however, it’s difficult for Caleb to access to helpful resources.

“It’s a lot easier being in a classroom,” Caleb said.

One of the things he loved about football was meeting people and making new friends. Now the virus makes it difficult for him to show his talents, continue his education, and spend time with his teammates.

“But it (closing school) was the right call,” he said. 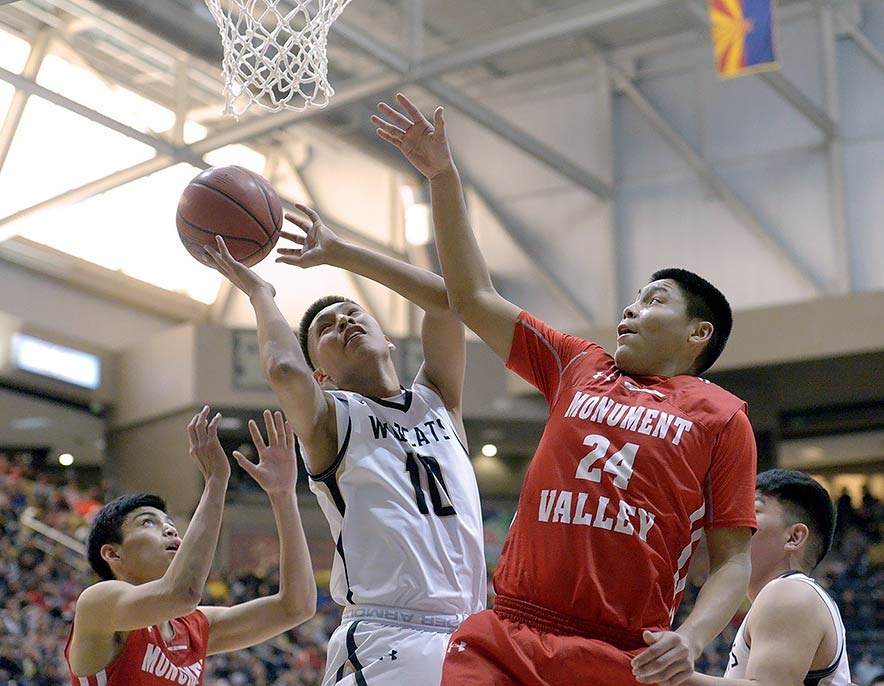 File photo
Former Chinle standout Cooper Burbank powers his way for a two-point basket in this file photo against the Monument Valley Mustangs. Burbank, a Pima Community College signee, is going start college with virtual classes due to the COVID-19 pandemic.

He was also a prominent character in the Netflix documentary “Basketball or Nothing,” starring in two seasons.

Burbank was accepted to Pima Community College, where he’s planning to get an engineering degree and to continue playing for the Aztecs men’s basketball team.

However, all of the college’s fall sports have been canceled, and they too are switching to virtual classes.

Burbank hoped to move to an apartment and get to know the area of Tucson, but he is currently at home. He is getting ready for his online college courses to begin next week, which is not a bad situation for him, but he is disappointed.

Chinle High closed in March, but he took part in the drive-through graduation in May. He received his diploma and drove past his family members, who lined the streets of Chinle and cheered as he passed.

“It was set up pretty good,” he said.

Burbank, along with other new Aztecs athletes, said they were supposed to get help adjusting to college, especially within the athletics program. Although things are difficult right now, he is nevertheless happy about the precautions being taken.

“I really understand,” Burbank said. “We’re trying to slow the pace of the pandemic, and I encourage people to take care of themselves … just so that everyone around us can be safe.” 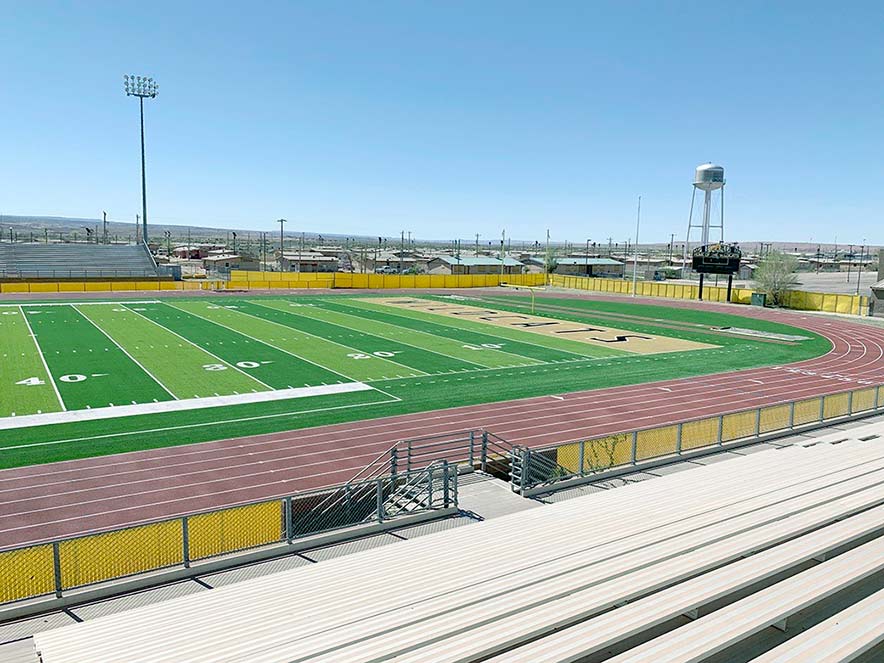 File photo
The Chinle Unified School District upgraded its athletic facilities this past spring but due to the ongoing COVID-19 pandemic the football stadium will sit idle for the upcoming fall sports season.

According to Martin, sports have great value to the people of the Navajo Nation. Not only is it a way to live a healthy lifestyle, but it is also one of the ways that students can show their talents and hone them to perfection.

This is one of the best ways for students to get scholarships and an opportunity to receive higher education.

Martin has always thought that athletics and academics go hand-in-hand, sports being used to teach students more about themselves and, in turn, help students to stay healthy both physically and mentally.

“Since we have to cancel, this is something athletes can learn from,” Martin said. “Instead, we need to flip the mindset and ask what we can learn from it. This is giving us the opportunity to re-establish our relationship with our families and culture … everyone’s lessons will be different.”

There are no immediate plans for restarting fall sports but they have not given up hope for the spring semester.

The Chinle Unified School District administration will continue to monitor the situation before coming to a decision on spring sports.

What Martin speculates must happen to have sporting events again is guaranteed safety for the students. A vaccine will help, but until cases go down on the reservation, as well as at other schools where Chinle usually competes, then the safety measures must be followed.

Until then, Martin encourages all athletes to continue their education and training.

Despite having no access to a gym and lacking workout equipment, athletes continue to hone their skills.

Dickson trains almost daily by traveling to a family friend’s land where he practices endurance and stamina in a dry riverbed.

Burbank scrounges for whatever he can find for weight lifting as he focuses on building his strength as online college classes will soon begin for him.

“I have a lot of fire being built up inside of me, ready to be lit,” Burbank said. “And I’m looking forward to starting back up again.”