Piedra Vista hoopster overcomes injury to sign with U of Southwest

She was heartbroken, knowing that her promising senior year had to be cut short during a regular season tournament game.

“I knew right away that my season was over,” Blackie said.

That injury happened when she was making an ill-fated move to the basket with a simple crossover dribble during a game against Las Cruces Mayfield on Dec. 13, 2019 in the semifinals of the Mel Otero Invitational at Rio Rancho High.

“We were playing a tough team and we were down by a couple of points,” she recalled. “I took a step to drive it in and once I made my move my knee popped.” 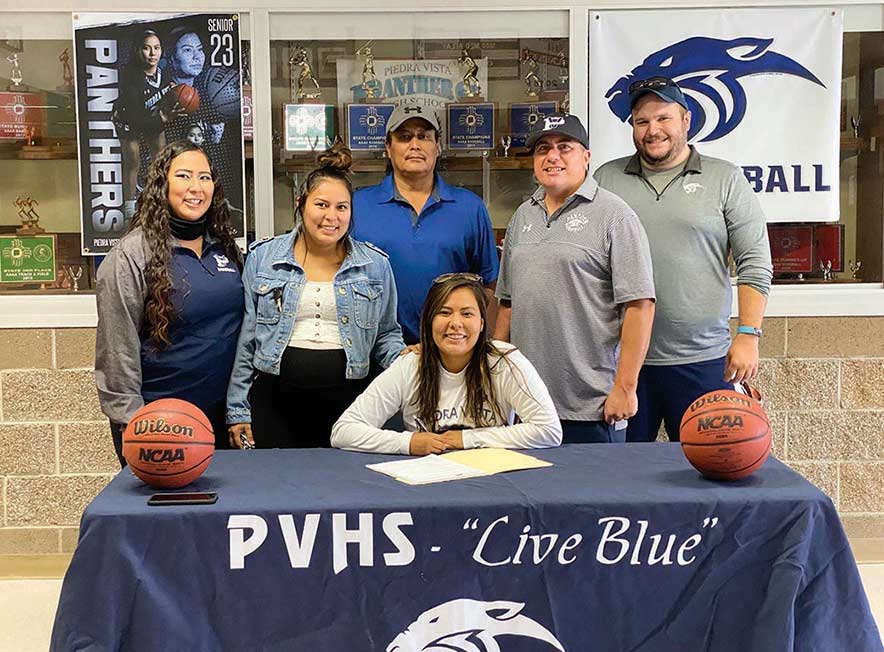 Incidentally, she’s not the only Blackie family member to experience that injury as her dad, Vernon, and older sister, Alexandria, both tore their ACLs while in high school.

Not long after her injury, she had surgery to repair her ligaments in her right knee. And with that she had to go through the lengthy process of rehabilitating that bum knee.

“It was real hard on me mentally because for the rest of the season I had to watch my teammates play the sport that I love,” she said. “I was real heartbroken and I just kind of gave up.”

But after dad talked some sense into her, Blackie got on the bandwagon to turn things around. She started small and worked her way to working out at least two times a day, five days a week.

“It’s hard to come back from an ACL injury but I just pushed myself,” she said. “This whole summer I’ve been working out at the gym and I’ve been running a lot. I’m trying to get back to my old self again and in the process I noticed that I had regained some of my strength back in my knee.”

And while the rehab process was excruciating at times, Blackie has a lot to be thankful for as she signed with the women’s basketball team at the University of the Southwest in Hobbs, New Mexico.

“This is a huge step for me, especially after coming off an ACL injury,” she said. “I’m excited to see what’s out there with this new experience. It’s a big step to play with some college girls down there.”

Admittedly, Blackie had some doubts on whether she was going to play at the collegiate level as some of the schools that were interested in her backed down.

Vernon says he remembers having that conversation with his daughter about moving past her injury.

“She missed out on her senior year and she was devastated by that but I told her she had to look at the next chapter in her life,” he said. “She had to overcome a lot with this injury and to me this is quite an accomplishment. A lot of schools back off on her but I’m proud of the (University of the) Southwest gave her a chance to do this because she’s worked hard to build herself back up again.”

Blackie said she owes a ton of credit to former Navajo Prep standout Harlei Haceesa, who advocated for her with USW head coach Devonte Brewer.

“She gave me this opportunity to play down there so I owe her a big thank you,” she said. “She talked to the coach and he got in contact with me and within 24 hours I got a scholarship.

“It’s going to be a challenge to get back into my groove but I’m looking forward to this opportunity,” she said.

And while she’s been medically cleared to resume playing basketball, Blackie is still overcoming some of the mental challenges of recovering from an ACL injury.

“I know that I’ve been cleared but I’ve thought about what if I did another crossover and this happens again,” she said. “I’m just trying to get past that fear.”

“It’s a lot to overcome, mentally,” her sister, Alexandria, said. “Physically, I feel like she can do anything but a lot of it is her getting over that mental hump.”

Alexandria said she’s had several conversations with her younger sibling and she’s talked about her own experience.

“Sometimes she feels iffy about doing different moves but I told her that her doctor released her for a reason,” the PV 2012 graduate said. “Her knee is where it should be but like I said the hardest part of ACL tear is getting over that mental hump.”

Over time, Vernon said, her daughter will overcome that and when she does the sky’s the limit for her.

“She had a rough senior season but she’s fought back” he said. “She didn’t give up and to be honest she hates failing. She builds herself to be successful in everything she does.”