Myren Hoskie was one of the most notable baseball players growing up on the Navajo Nation. It is little surprise that Ottawa University saw his potential and signed him on to play for their school. Baseball has always been Myren’s passion; he thought of little else. 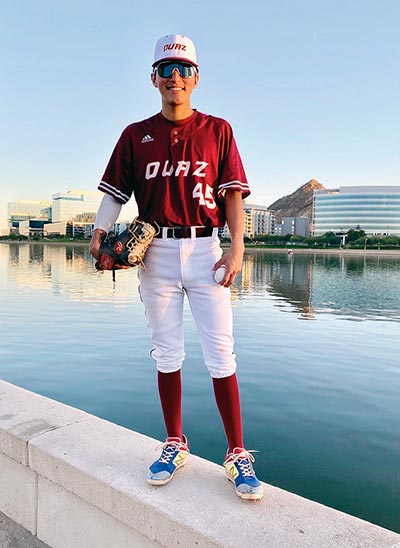 “I did cross country to stay in shape and to stay on top of my academics because I had nothing else to do,” Myren said. “Right after that I did basketball and it was the same thing as cross country — I used that to stay out of trouble and to keep up in my academics — but those were just side sports I did. The sport I really wanted to do and the one I wanted to stick with was baseball.”

Myren has been interested in the sport since as far back as he can remember. From Tee ball on up, he has played in multiple tournaments, on and off season, and was taught by different coaches all across the Navajo Nation.

Ever since the fourth grade, he stood out for one small detail that often threw his opponents for a loop. He is a southpaw, something his dad, Myron Hoskie, noticed a long way back.

“Well, his main strength is pitching, and he is a lefty,” Myron said. “That is really what caught the recruiter from Ottawa, being a lefty. If you know baseball you know lefty pitchers are hard to come by; they are different from a right-handed pitcher. That’s what really caught most of these coaches’ attention.”

But it wasn’t just the way his son threw that got coaches’ attention. It was his work ethic, how much he put into becoming a star athlete.

“As he got older, the teachings and the discipline taught him to work hard and not to give up,” Myron said. “He really took that in and that’s all he has been doing, especially when he got to the junior high level. Then when he got to the high school level he was out practicing and practicing, even hitting baseballs off a tee. He would be out there hitting baseball, then running every day. He would work on every aspect of the game. He wanted to learn every bit of it.”

Myren’s coach at Chinle High, Don Kimbrough, has been paying attention to Myren since the beginning. Since his own kids were the same age as Myren and they love the sport just as much, Kimbrough saw a lot of Myren and the other kids who would grow up to be a part of the future Wildcat baseball team.

“I see Myren going a long way in what he is doing as a student in school and I also see him able to go as far as he wants in baseball,” Kimbrough said. “It’s up to him in how far he wants to but he certainly has the skillset to play upper-level ball and we have several players, still have a couple that are very capable of climbing up to upper-level baseball. And the school part of it, I see him going a long way with the school also.”

Myren has since been a First Team All-Region Pitcher and was a part of the Wildcat team when they won the 2019 3A North Region tournament, something they had been chasing for years.

“Although I am capable of playing all positions, my greatest strength would be pitching,” Myren said. “I’ve been Chinle’s closing pitcher since my junior year of high school.”

Myren was looking forward to 2020, foreseeing another great season with a lot of teammates and playing the sport that he loved.

Sadly, the COVID-19 pandemic robbed them of another chance at the tournament as Chinle High cancelled sports.

“I was disappointed,” Myren said. “Our team had the returners back from my junior year … We were bound to win another region title for Chinle and we were bound to possibly to go further in the state’s playoffs.”

Despite the cancellation, one good thing came out of 2020 for Myren when he got recruited by Ottawa University.

“It was pretty exciting because at the time Ottawa was a school I was actually interested in first,” Myren said. “And to get the chance to have the coach come up to you and talk to you, it’s like really no better feeling than attending the school that you were interested in the first place and then to actually attend, I was pretty excited.”

Ottawa’s coaching staffs trains and plays in the D1 Division. They help amateur players get noticed, sharpening their skills and helping them get into the big leagues. One of Myren’s dreams is to get more exposure and ultimately get to the MLB where he can continue to play baseball.

“What baseball has taught me is how to stay humble, because you meet more people and more good players as you go. You can’t compare yourself to them because everyone is all the same and it has taught me how to control myself more during the closer games.

“It’s taught me how to value things. Like with the pandemic I know there are schools that can’t play and there are programs that are shut down because of this, but thankfully ours isn’t. It has taught me value and the humbleness of the game and what it brings to you like new people, new friends and new coaching.”

Now Myren is going to school in Surprise, Arizona, learning at a new level and learning to play a different variation of baseball.

“I like how the pace changes because during closer games at college the speed gets faster because of the rotation of the pitchers so it changes a lot,” Myren said. “The intensity got higher, the competition is just right, because when I was a little kid, I never played with my own age division, I have always played with those two years higher than me.”

Myren will be playing the role of pitcher, but he is comfortable with most other positions. While playing ball he will be studying sports medicine. Although he never imagined wearing a mask during practice or doing a bulk of his learning online, he is still putting in the effort.

Myron is very proud of his son and sees it as recognition for everything his son had sacrificed in order to get to this point.

“When we got the call from the recruiter it was a jaw-dropper,” Myron said. “The afternoon they had the drive-thru graduation because of the pandemic, then we got home and the recruiter called me first. I questioned him like ‘Is this real, is this a real phone call?’ and he said, ‘Yeah it’s a real recruitment phone call. We want him to play baseball for Ottawa University in Surprise, Arizona.

“That’s when the whole process started. You know we shed tears, then we hung up with the guy. All the hard work and everything he put it; it was a really special moment for us. And for Myren too, he had been working and working and working on his game.”

Kimbrough views hard work as something essential, not just for Myren, but the many other young talented people on the Navajo Nation.

“It’s very gratifying to see them advance in something like that,” Kimbrough said. “It also goes right along with what I was saying about a person developing themselves into something, which is our main thing. We just use baseball as a means to get to that.”

Myren has high hopes for the season and the beginning of his new life at Ottawa University as he seeks to make his family and people proud. One of the biggest inspirations in his life was his late paternal grandmother.

“My late nali, my dad’s mom, she was one of my main supporters or like my Number One supporter,” Myren said. “She had been to every game and she helped me grow up. My dad, he has been my coach since I have been very young. I make this happen because of them: my dad and late nail, because that is who I first started with.”

Although he has worked hard for the scholarship, Myren acknowledged he couldn’t have done it by himself.

“All the skills I have learned over the years are because of them. I wouldn’t be here if it wasn’t for any of them and for my family’s support.”