They’ve been the most consistent team in the 3A East Region for the past few years. 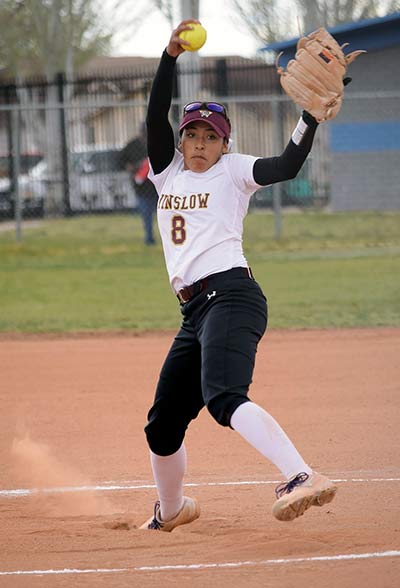 Winslow junior Jordyn Johnson gets ready to pitch the ball to a Snowflake batter on Apr. 5. Johnson went the distance and struck out 12 batters in a 3-1 loss.

Winslow has finished either first or second in five of the previous six seasons in region play. But when they took to the field in a pair of games last week, 7th-year coach Kelli Fifelski felt something was amiss.

The Lady Bulldogs dropped two region games last week, losing to Payson by a 2-1 count on April 2 followed by a 3-1 setback to Snowflake last Friday afternoon.

Fifelski said the hard work they’ve put in practice did not carry over into the two games they played.

“It doesn’t look like we don’t work them hard but we really do,” said the Winslow coach, whose team dropped to 11-7 overall and 3-2 in 3A East play. “We busted their butts every day in practice for the past few months and they’re doing all the drills and running the bases but we just didn’t show that.”

Nonetheless, there were a few bright spots for Winslow as junior pitcher Jordyn Johnson gave up one earned run on six hits. In seven innings of work she finished the contest with a dozen strikeouts.

Offensively, though, the Bulldogs were unable to put the ball in play. With only one run scored – a homer from junior first baseman Chloe Wilcox – Fifelski said they should have put up more runs in last Friday’s game with Snowflake but they just couldn’t string enough hits to gain any traction.

“Some of them had good hits but some of them didn’t,” she said, while noting that most of their attempts were pop ups that Snowflake fielded.

Winslow did scatter 7 hits against Snowflake pitcher Sydney Bauer but at some critical moments they got busted, trying to steal for extra bases that cost them an out.

“We had a couple people on but we had some base running errors,” Fifelski said. “I don’t know if their heads weren’t in it or not but we’ve got to pull it together and we got to get some wins”
Snowflake coach Aaron Huish said anytime you beat Winslow, that’s huge.

“I don’t think Winslow came out and played on their ‘A’ game today,” he said. “But I feel like our girls took advantage of that and were able to get the win.”