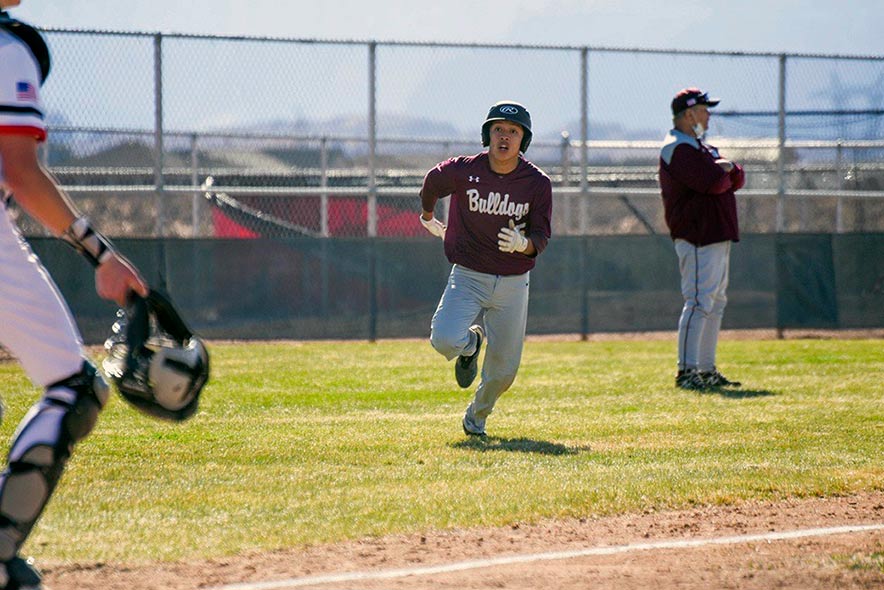 Special to the Times | Krista Allen
Winslow’s Touron Dick (5) heads home against the Page Sand Devils on March 24. The Bulldogs defeated the Sand Devils, 11-0, in the first contest and 26-5 in the nightcap.

It was a cool day last Saturday as the Winslow baseball team went up against Tonopah Valley’s Phoenix at Vargas Field across from Winslow High. The boys would bring out their third win of the season, 14 to 7 in the final inning.

Winslow had the field in the first inning. The team was able to deny Tonopah from scoring at the top of the first before switching. Senior Zane Corum was the first to bat and got to first base. Then when he saw the opportunity at the next hit, he ran all the way home and got Winslow their first score. By its end, senior Sonny Wilbanks and junior Jace Lyons would also run home and ended the first inning with 3 to 0 Winslow.

Junior Touron Dick pitched again in the second inning where the Phoenix had more luck. They were able to load the bases and two of their players were able to score, bringing the count to 3 to 2 before Tonopah got their third out.

At Winslow’s turn to bat, senior Tysen Leonard got to third and Corum was on second when Lyons came up to bat. To a loud cheer from the small crowd, Lyons hit a homerun and brought the score up again. Sophomore Keaton Kislingbury would also make another score, making the tally 7-2.

During the 4th inning Tonopah was able to bring up its score 7-5 while striking out Winslow before it could make a score.

As the game drew on, Tonopah showed that they have good hitters as well as a never-quit attitude. They became more focused during the next few innings. They were able to score points in the third and fourth inning while denying Winslow any ground until the fifth inning where they almost caught up with 7 to 6.

Despite the close chase, the Bulldogs hunkered down and kept on working. While Tonopah’s strength might have been at the bat, they needed more practice with their throws. Twice when the pitcher tried outing Bulldogs attempting a steal, the baseman would miss the catch and allow the Winslow players to run the course. When Winslow was on the field as a team, they were able to make expert catches and strike their opponents out.

“They stayed together, they picked each other up if something goes wrong. We got good communication amongst our boys, we pick each other up and hold each other down, responsibility among each other, so great band of brothers here,” said Garrett.

In the fifth inning, Corum took over role of pitcher, giving Touron Dick a break after carrying the position through the first five innings. Junior Chris Arellano walked to first, stole second base and then when Leonard hit the ball deep in center right field, Arellano made the run home and scored Winslow’s first point in the past two innings. Leonard would eventually make it home before the end of the fifth with the score being 9-6.

In the sixth inning Tonopah got a run before being struck out and allowing the Bulldogs to take the field. Arellano was able to get to third base when at the next bat he tried to take home, but then the catcher was thrown the ball, Arellano tried to go back to third but the ball was passed to the third baseman. Arellano was in a pickle for a few seconds when the third baseman dropped the next pass and Arellano made a mad slide for home.

At the end of the seventh and final inning, Touron Dick made the last score for Winslow 14 to 7 and ending the game.

“It wasn’t the prettiest of wins, but a win is a win,” said senior Zane Corum. “The coach emphasizes putting the ball in play when things happen. We have a tough time doing that in the first; we got that in the last two endings and got a big lead, gave me some room to pitch …

This makes Winslow’s third win of the season and marks its comeback from its defeat at the hands of Chino Valley just a week before.

“For this season, we’re just looking forward to the end, see how our boys do and take on challenges,” Garrett said. “We picked a pretty good team in Chino a couple of days ago and they definitely brought it with a good left hander and to see our boys turn around and are ready to play today, I just hope we carry that on for the rest of the season.”