‘I just wanted to keep hitting’ 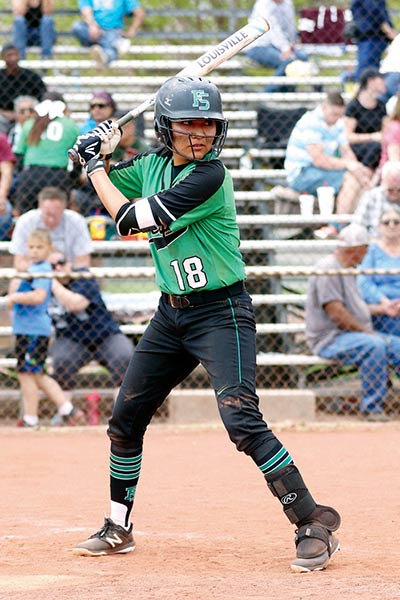 Farmington’s Kekysha Nakai sets up for the pitch in the fourth inning against West Mesa on Saturday in Farmington. With nine home runs under her belt she has the second most homers in the state at the Class 5A level.

When Nekysha Nakai prepared for her final softball season, she simply hoped to get better.

But the Farmington High School senior got more than she bargained for and has become an offensive force for the Lady Scorpions. She is the second-best hitter in the state when it comes to homeruns with nine under her belt, has a batting average of .378 and has 27 RBIs, according to maxpreps.com.

Nakai said it’s something she wasn’t exactly planning for.

“It wasn’t really a goal for me, but I just really wanted to keep hitting,” she said. “I wasn’t really trying for homeruns or anything; it just naturally happened for me.”

A four-year starter for Farmington’s softball team, Nakai said she did have plans to improve in various aspects of her game, but didn’t focus on one specific area.

She said once she realized the gains from her preseason work, she ran with it.

“I was just really trying to make myself better, speedwise; hitting the gym, weights, and really just focusing on fundamentals,” Nakai said. “The very first game, I hit a grand slam against Navajo Prep and I was like, ‘this feels nice, so I’m going to keep doing what I’m doing,’ and I did.”

Nakai has been asset to the team for the four years she’s played varsity, but even more so this season.

Farmington head coach Tim Trotter said Nakai has put herself in a prominent position in the batting lineup as the three-hole: the best all-around hitter on the team and one the team typically relies in tough game situations.

“I didn’t know if she’d ever be our three-hole, but this year she’s a great one to have,” he said. “She’s always been able to hit, but in the last year, she’s really gained a lot of power and she’s become my everyday three-hole.”