Growing up Myles Harvey had dreams of landing a Division I baseball scholarship.

The recent Kirtland Central grad still has those aspirations even though he’s taking a different route to get there. 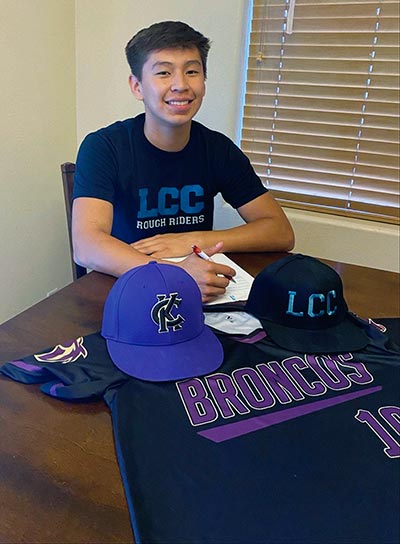 Submitted
Former Kirtland Central standout Myles Harvey will hones his skills on the Luna Community College baseball team in hopes of earning a Division I scholarship.

“That’s the main goal,” said Harvey, who was ranked No. 9 in graduating class of 150-plus students. “I want to get to a four-year university and play Division I ball.”

To get there, Harvey will hone his skills on the Luna Community College baseball team for the next two seasons.

The Las Vegas, New Mexico-based college was one of three offers he received despite not playing a full season of high school baseball this past spring due to the ongoing coronavirus pandemic.

“I feel like that hurt my recruiting process,” he said. “I think I would have had more opportunities if we had a full season. With no other colleges showing an interest I took a shot of going to Luna.”

Harvey signed with LCC on May 8 as a preferred walk-on, meaning that he’s guaranteed a spot on the baseball team.

“If everything goes well with his academics and he moves onto the next semester they’re going to give him a full scholarship,” his dad, Trevor Harvey said. “There is an opportunity there but he has to bring his game.”

The Harvey patriarch said it was a proud moment for him when his son signed his letter of intent.

“It’s awesome and it feels great to see him succeed,” Trevor said. “I’ve been working with Myles since he got into T-Ball. He moved up to Sandy Koufax and then to the high school level.

“He’s put in a lot of work and now he’s been accepted to a college and he’s entering a baseball program,” he said. “All those building blocks are starting to pay off for him.”

“This is real exciting for him,” his mom, Marlena Harvey, said. “We’re very grateful that he got this opportunity to play.”

While at LCC, Myles said he’s planning on earning an associate degree in general science.

“After that I’d like to get into the medical field,” he said. “I want to be a physician assistant.”

While at Kirtland Central, Myles played three years on the varsity team, earning a starting spot his junior and senior seasons.

In his first two seasons in the KC baseball program, he played second base his freshman and sophomore years.

By the time he reached his junior year, he was moved out to the outfield as the Broncos had graduated key players the year before.

“I feel like that’s where my strengths are,” Myles said. “I do have speed and I do have some arm strength.”

Offensively, Myles said he’s made adjustments to his swing in between his sophomore and junior year. He felt that his mechanics were not aligned correctly as he couldn’t make good contact with the ball.

“I felt like I didn’t have enough power,” he said. “I had a coach work with me and he told me to shorten my swing. When I changed my swing I had better approaches at the plate and I had better at-bats.”

Harvey said he’s looking to continue to perfect his swing while at LCC. Defensively, he’s hoping to stick to the outfield but if they need him in other areas he’s willing to do that.

“Being in the outfield really works for me but I’m willing to play other positions,” he said. “If I have to play another position I’ll just have to adapt.”

Early in his development, Myles started as a catcher for his dad’s baseball team. He played that position for almost eight years until he was 14 years old.

“As a catcher you have to command the field,” Trevor said. “You have to have the ability to stay mentally strong and handle some tough calls and Myles was able to do that.”

Trevor said his son grew up playing that position but he considers him “an all-around player.”

“Don’t get me wrong, he can play any position,” he said. “He can play infield and outfield. He’s a good kid, a very strong kid.”

In 2019, the Horned Frogs captured the 18U title at the 21st Annual Arizona Diamondbacks Inter-Tribal Youth Baseball Tournament.

“He’s played on multiple teams and I feel like it’s prepared him to play college ball,” Trevor said of his son. “He’s been to a ton of tournaments and with all the wins and losses there are a lot of emotions that go into that. And now he’s going off to college to fulfill his dreams.”