Lady Bengals get nod as top seed in 4A bracket

In a historic first, the Gallup softball team was awarded the top seed for this week’s New Mexico Class 4A state playoffs.

The Lady Bengals enter the state tournament with an 18-2 record, including a perfect 10-0 mark in District 1-4A play, as Gallup edged No. 2 Artesia for the top spot.

“This is huge accomplishment,” Gallup coach Rayfert Spencer said. “The girls have worked hard and they have put in a lot of hours on the field to earn this recognition. I’m happy with where the program is headed and I would like for us to be No. 1 at the end of the year, which means winning the whole thing.” 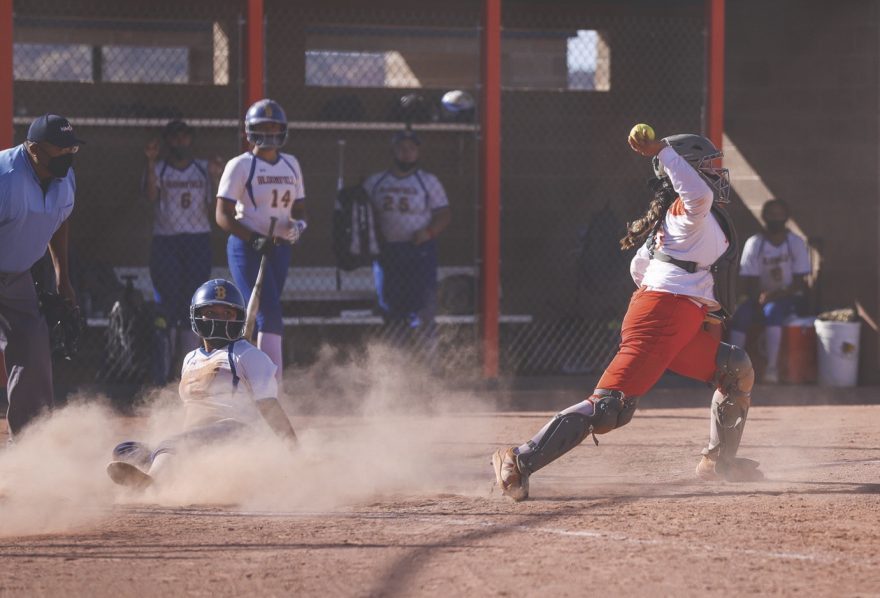 Navajo Times | Sharon Chischilly
Bloomfield’s Yasmin Lehi (5) slides into home base as Gallup’s catcher makes a throw at third base for an out on June 4 i this file photo. Gallup got the nod as the top seed for the 4A state playoffs as the Bengals will host No. 8 seed Bernalillo at 4 p.m. on Tuesday.

The Class 4A and 5A teams will start postseason play on Tuesday while the smaller school divisions will start today.

In the 3A bracket, No. 6 Navajo Prep will play No. 3 seed West Las Vegas at Cleveland High School in Rio Rancho, New Mexico, at 4 p.m.

In the 2A bracket, district champion Rehoboth earned the No. 6 seed and they will take on Loving at 11 a.m. today. Navajo Pine, meanwhile, plays at top seed Tularosa at 4 p.m.

In the 4A bracket, the Bengals will host No. 8 seed Bernalillo on Tuesday at 4 p.m. at Gallup High School, as the visiting team sport a 6-14 record.

In addition to Gallup, the Miyamura Lady Patriots also earned a state bid as at-large team. The Patriots got the No. 5 seed and they will travel to No. 4 seed St. Pius X (17-3) for a 4 p.m. matchup.

The winner from Tuesday’s matches will play in Thursday’s semis with the higher seed hosting. The championship game is scheduled for Saturday at UNM softball field in Albuquerque.

In his submission to the New Mexico Activities Association, the Gallup coach had pegged Bernalillo as the No. 5 seed, not knowing the Spartans had forfeited 11 games this season due to using an ineligible player.

“I put them in there because of their record and who they played,” Spencer said “After I submitted my list, I found out that they had to forfeit some games but Bernalillo is still tough. We’re treating this game like they’re the top seed. We have to do that because you can’t overlook anybody.”

On their top half, the Bengals have the potential to meet St. Pius X or Miyamura in the state semis if they can get by Bernalillo.

“We’re not looking that far,” Spencer said. “We’re taking it one game at a time.”

As an at-large team, Miyamura coach Mattea Lovato said their body of work over the course of the season earned them a trip to the playoffs as the Patriots only lost three games, two to Gallup and the other to Bloomfield.

“We’re excited,” she said. “We have a solid team and, you know, we had a couple of bumps but every team does. Their headspace is what determined where we are right now. They came in hot and ready for this season.”

And although they have not faced each other, the two teams have played some common opponents such as Aztec, Bloomfield, Grants and Gallup.

“I haven’t heard much about them,” Lovato said. “We’ve looked at who St. Pius has played and how the games turned out but the thing that we’re trying to implement with these girls is that we need to show up and play our game regardless if we’re the No. 1 seed or the No. 8 seed. We need to play our game and nobody else’s.”