Tyler Wulfert stood out for the Midland College baseball team this season.

The Piedra Vista High School graduate was the lone Chaparral to play all 45 games. 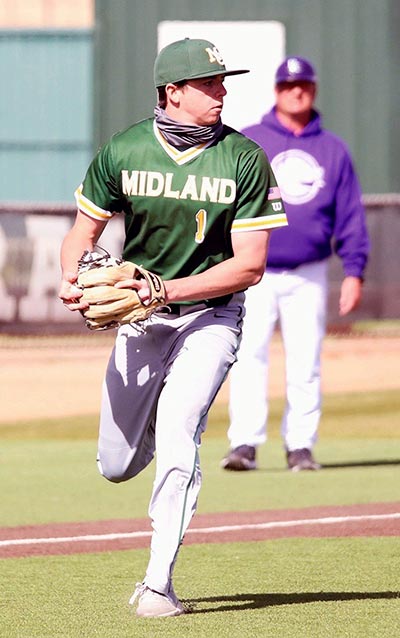 But his value to the team (29-16) was much more than his presence in the lineup. The freshman shortstop led the team with 70 hits and seven triples. In batting .391, he had 39 runs batted in and six home runs, both third on the squad.

He was named to the all-Western Junior College Athletic Conference team.

“It was a lot of fun,” the 6-foot Wulfert said Sunday, when he was on a bus en route to a game for the Victoria Generals in the summer Texas Collegiate League. “There’s nothing I would rather do than play every game and have a lot of fun.”

Batting third in the order for the Chaps, he had a season-high, seven-game hitting streak, with five of his 25 multi-hit efforts in that span, and three times reached hitting streaks of five games. He finished with six three-hit and two four-hit efforts.

“I was confident going into the season,” he said. “I know my skill set. I’m always confident I’ll get a hit.”

“I probably just had a good plan and stuck to it,” he said about all the multi-hit games. “See the pitch I have to see and hit the right pitch.”

Going into games, he had a plan at the plate, yet he adjusted in the game when necessary.

For the most part, though, he said his approach was to “stay short, stay small, stay within myself and not try to do too much.”

“He’s done a great job for us,” he said. “He’s a phenomenal kid, a high-character kid.

“He’s an advanced hitter,” he said. “His swing gives him the ability to hit to all parts of the field.”

Defensively, Wulfert finished with a .905 fielding percentage in 137 chances, fourth most on the team, and had a hand in 20 double plays, third most on the squad.

“He’s a kid that can play anywhere,” Rodriguez said. “He’s such a good athlete. He has good foot speed and good arm.”

Wulfert had a team-high 14 stolen bases in 16 attempts for Midland and wants to boost that number.

“I think I can steal more bases,” he said. “I’m hoping to be a little bit more aggressive. When I do have the green light, taking the opportunity to get to the next base.”

For the Generals, he has been playing shortstop and batting fifth. He carried a four-game hitting streak into Monday’s action, lifting his average to .224 after struggling early in the season.

“I was getting outside of my plan,” he said. “I was trying to do too much. Recently I tried to simplify.”