New Mexico on Saturday hosted the state track meet for the 5A Division at the UNM Track and Field and Soccer Complex. It was very late during a regular season, but because of the coronavirus pandemic the high school event was put off until late June where the athletes followed safety precautions. 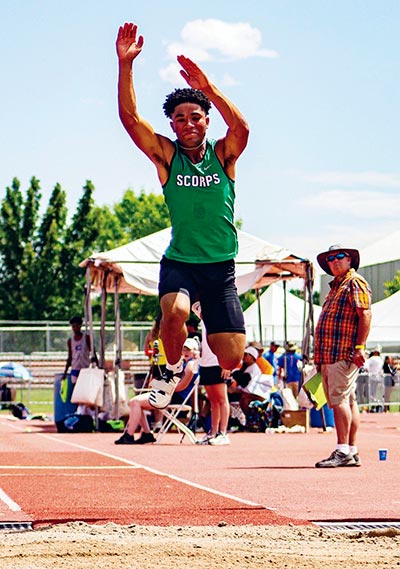 Navajo Times | Cyrus Norcross
Farmington junior Kayden Gonzalez won the 5A state title in the triple jump on June 26 in Albuquerque. Of his six attempts, Gonzalez won it with a 45-03.25 effort.

Among the many schools that competed were Farmington High and Piedra Vista High.

Farmington’s graduated senior, Allie Bliss, stole the show during the girls long jump event. At first, Flavia Wilging from Cibola High broke the state record for the long jump with a distance of 18-06.00 meters. Bliss was the very next competitor in line and she startled everyone by landing at 18-06.25 meters, making her the new state record holder and placing first in the event.

Later Bliss would also come first in the girls triple jump at 36-09.00 meters.

Placing first alongside his teammate for the boys triple jump was Kayden Gonzalez, a junior from Farmington High, who won with 45-03.25.

Gonzales was in high sprit as he PR in the triple jump. He’s been in track since middle school, having gone to state for the first time in the eighth grade. He always came in second or third place for the triple jump, this is his first time getting first place.

“When I was little, I would just skip around everywhere,” Ramos said, explaining how he started competing in the triple jump. “So, my coach was like, ‘Hey I want you to come over to triple jump,’ and I was like, ‘All right,’” he said.

“It is amazing, I love competition, it is amazing. This is my favorite track meet.”

Ramos is already looking forward to next year, knowing he’ll do better in this event and also the pole vault and the 400-meter run.

One of the top boys from Piedra Vista that placed was sophomore Axel Ramos who came in fifth place for the 110 hurdles event and sixth in the high jump.

“It could have gone better, but I am proud I placed in an event,” Ramos said.

This season hasn’t been ideal for him or for any athlete to be truthful, but Ramos said his team still has fun and makes good memories. He’s happy that, despite the challenges of the pandemic, they were able to make it to state.

“Our team is definitely getting better every year, just helping everyone get better and I am excited for next year,” Ramos said. “Go Panthers!”

As for the girls’ side from Piedra Vista, alumna Jhonae Reed came in fourth place for the girls 100-meter dash while her teammate, freshman Sarah Wulfert, came right behind her at fifth.

The Piedra Vista team also placed third in the girls sprint medley relay with a time of 4:26.65.

Meanwhile placing first for the medley relay was the Rio Rancho High team at 4:24.12. Running the final 800-meter sprint for the team was sophomore Violet Francisco.

“Chemistry means a lot to us, actually getting along with each other,” Francisco said as she described the team’s victory. “A team that doesn’t get along kind of falls apart and not do as much. We have great chemistry, and I think that is a great success for us.”

“This is my first state track medal. It is pretty big, that is what I was aiming for in the medley,” she said. “All thanks and glory go to God. ”

A favorite runner that also competed was graduated senior Chris Humetewa from Sue Cleveland High placed third in the boys 1600 and 3200 races.

Humetewa PR in the 3200 at 9:52.11, beating his previous record by 2 seconds. Humetewa was happy to compete and spent a lot of time cheering on his fellow teammates and even some friends from other schools.

“Coming in today I knew these guys are no one to joke with,” he said. “I use to run with them at Jamboree and all these other meets so I knew this is a league you are not supposed to play with. So, coming in 3rd is surreal to me because my goal is that, we are going for a team title today as far as the whole track team.”

The season was unusual, but the seniors were happy to get this one last chance to shine while the younger classmen got to experience the chance of qualifying and making it to state where hopefully we’ll see them again next year.