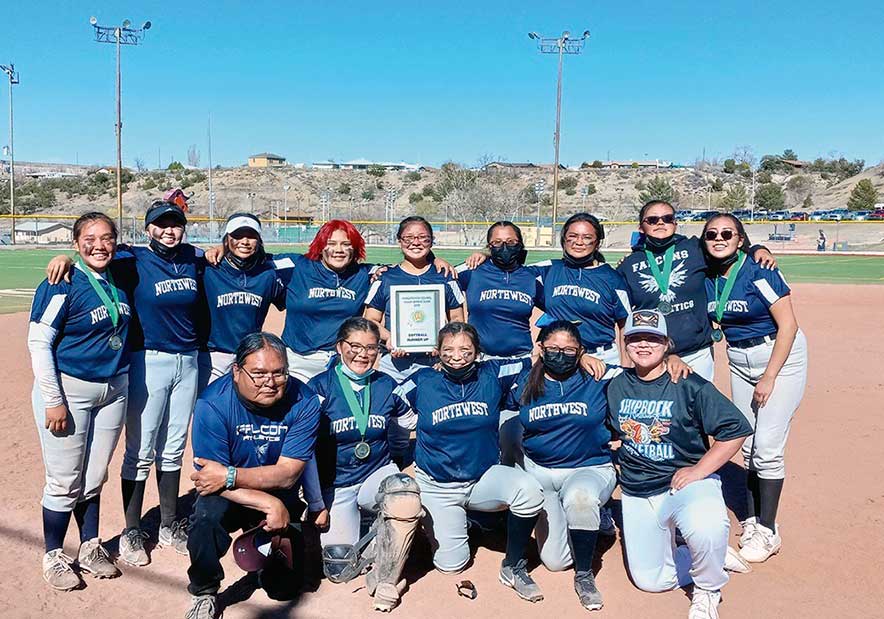 File photo
The Shiprock Northwest softball team earned the No. 4 seed in the New Mexico Class A/2A state softball bracket. The Lady Falcons takes on the survivor between No. 5 Las Cruces Mesilla Valley and No. 12 Pecos at 1 p.m. on Wednesday at Cleveland High School in Rio Rancho.

In a historic first, the Shiprock Northwest softball team earned its highest seed ever for the New Mexico Class A/2A state softball tournament.

The Lady Falcons got the fourth seed in the 12-team bracket that was released on Sunday by the New Mexico Activities Association.

“We’re pretty much in awe with that,” Northwest coach Leon Wheeler said of the state seeding.

“I was expecting a sixth seed so I’m in shock that we got the fourth seed,” he said.

As part of the state seeding process, the NMAA gets input from every coach in the state and by his estimation a lot of the other coaches seeded his team in the top four.

“Historically, a lot of the eastern and southern teams put themselves up there,” Wheeler said, “so when I heard we got the fourth seed I was like, ‘Wow.’”

The Wheeler-coached team completed the regular season with a 21-1 record with its only blemish coming at the hands of the Gallup JV squad during the title game of the Wingate Shash Softball Slam on April 2.

In the district finale, the Falcons swept Laguna-Acoma by scores of 14-4 and 18-12 as both contests went seven innings.

“There was a lot of pressure in that game,” Wheeler said while adding that sophomore ace Binaahozhonii Howard pitched both games.

“I think the Laguna game really challenged her,” he said of his pupil. “There were times when she was like, ‘I don’t know if I can handle this.’

“But you know, she really pulled it out,” he said. “She stuck in there all the way until the end, and she put a lot of heart into it. The rest of the team did too, especially in that last game.”

As one of the top four seeds, the Falcons received a first-round bye and they’ll await the winner of Wednesday morning’s game between No. 5 Las Cruces Mesilla Valley and No. 12 Pecos at 1 p.m. at Cleveland High in Rio Rancho.

The survivor of that game advances into Round 2 of the championship bracket at 9 a.m. on Thursday while the loser plays an elimination game at 5 p.m. on Wednesday.

“We’re hoping to win our game on Wednesday, but from what I’ve heard Mesilla Valley has a really good ball club,” Wheeler said. “We just have to take one game at a time and see how far we get.”

Laguna-Acoma, the district runner-up, earned the No. 9 seed and is scheduled to play No. 8 Mora at 9 a.m. on Wednesday morning in a play-in game at Cleveland High.

In the 3A bracket, Navajo Prep earned the area’s highest seed, coming in at No. 7 ahead of No. 8 Zuni and No. 11 Tohatchi.

Navajo Prep plays No. 10 Santa Fe St. Michael’s while Zuni is pitted against No. 9 Tucumcari and Tohatchi plays No. 6 West Las Vegas at 11 a.m. at Cleveland High.

The winners of the 3A play-in games advance into the double-elimination format of the tournament with games scheduled for 3 p.m. on Wednesday.