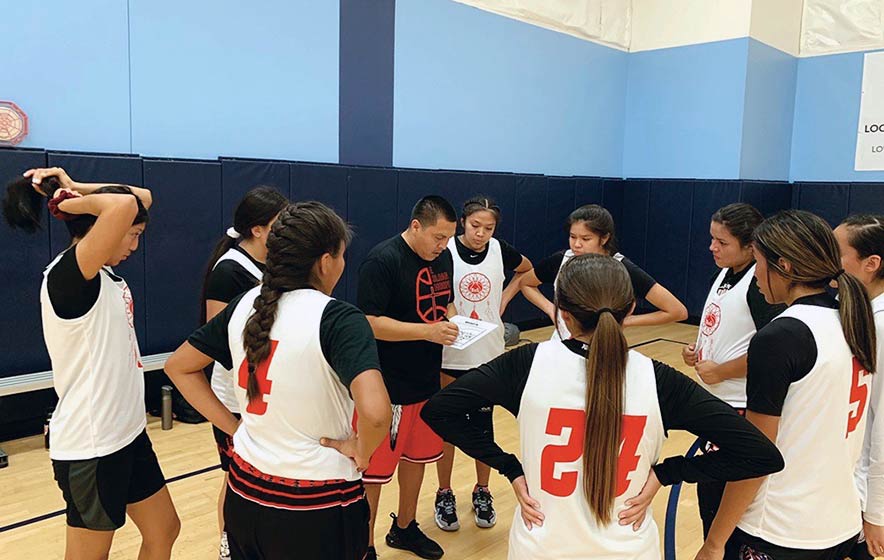 Submitted The Run N Gun all-Native girls’ team was started by former Window Rock standout Ephraim Sloan in 2015. Other than this past year, the Run N Gun team plays an average of 100 to 130 games.

For Ephraim Sloan, starting his all-Native girls’ team, Run N Gun, was a way he hoped to help young female athletes in the Valley.

Sloan was a basketball star when he graduated from Window Rock High in 2007. He continued to play and study at Scottsdale Community College, where he received his sports medicine degree.

He now works as a recreation coordinator and health advisor in the Phoenix area.

While working there, he saw a lot of young female athletes, particularly Natives, who didn’t have a team or club they could commit to since most of the focus was placed on male counterparts. Sloan hoped to change that as he started up Run N Gun in 2015.

Focusing more on players rather than being the top team, Sloan prioritized helping the girls learn valuable sports skills and a few life lessons.

“For us being an independent team, that’s really tough to do,” Sloan said. “So a lot of teams we go up against are fully sponsored where they already have everything paid for – traveling cost, tournament fees, uniforms, etc.

“We do try to fund raise here and there, but it does take quite a bit of money,” he said. “Even just playing here in the city or sometimes out of state tournaments, my girls often end up getting looks and also when playing for their school’s teams.

“I know their coaches work hard to get them noticed by college coaches,” he said. “I do the same as well.

“Like I was saying, when I get a group of kids, when I have a player, I really try my best to develop their skills while they’re with the team,” he said. “Otherwise its ‘what’s the point, why are you with my team?’”

According to Sloan, Run N Gun plays an average of 100 to 130 games both in and out of state tournaments and leagues. They’d usually find themselves in the championship game or in the top three finishers.

In 2017 they went to 26 tournaments, played for 14 championships, and were runner-ups eight times.

However, as Sloan stated, he doesn’t focus on the games as much as the players, something that he learned from his own father back when he taught Sloan’s boys’ team many years ago.

“I normally run the team like my dad did,” Sloan said. “He kept the team close knit. Once he got a group of kids together, he pretty much kind of stuck with that group … it’s really them, as long as they fit well with my team, and they know how to play with my girls, my team.”

Shante Slender was a part of the original Run N Gun team in 2015. Since then, she had graduated from Westwood High, played at Chandler-Gilbert Community College, and is now at Eastern Nazarene College in Boston, earning a bachelor’s in engineering.

“It was very different because we wouldn’t just play in regular tournaments,” Slender said. “We would play in the sponsored ones like the Nike tournaments. We would do essentially well, especially since we were an all-Native American team. We definantly stuck out when you compared our style to others.”

One different aspect was how Sloan didn’t try to mold his players into what he wanted but rather helped that individual player be the athlete they wanted to become.

“Which I thought was amazing and also was very different compared to the other club teams I’ve been on,” Slender said.

When Slender graduated in 2016, a lot of her teammates came and supported her. And when it was the rest of the team’s turn to graduate, Slender came and cheered for them.

She may have been on the team for just one year, but it built a bond like no other.

The sense of belonging stretches across years as expressed by Kalayna Johnson. She is a senior who is also set to graduate from Westwood High.

“It was just the players and being able to talk to them and getting to know them more,” Johnson said. “And with Ephraim, we got a lot closer since we’ve been playing every weekend, and that Run n Gun team just feels like family.

“Just being able to be there with them every weekend and spend time with them, playing with them, they’re family now,” she said.

For nearly five years, the team has been traveling and teaching young Native women and providing them with a second family. That mission recently met challenges with the current COVID-19 pandemic.

The team had to social distance and work independently as Sloan texted, called and Face Timed with his players. Sometimes they would work out together over social media.

However, as the state was in lockdown for the spring and summer, it robbed some athletes of their final games playing with Run N Gun before moving away to college.

Safety is most important

“At that first opening of the state, I didn’t have my team play skilled,” Sloan said. “It was more because a few of my players were really affected by COVID, not just them but their family members.

“Their safety was more important at the time rather than them playing on the court as much as I knew they wanted to play and I wanted to coach,” he said. “It was more for their safety. We commend many of the tournaments’ directors and committees for still hosting tournaments and keeping it as safe as possible for the players. It’s good. I know the kids really missed it, and it’s been going pretty good.”

This past weekend, the Run N Gun team finished playing at the Nike Tournament of Champions: The Bubble Session III. Although they didn’t win any honors, the team was nonetheless satisfied with their results.

“I think overall we did really good,” Johnson said. “We all worked hard, we gave our all, we only won one game, but out of the whole tournament it felt like we won the whole thing because of how hard we played.

“We’re kind of a small team playing against bigger more athletic players especially this weekend in the Nike tournament,” she said. “Most of those girls were over five-six and we were still kind of small, but we still played like we were tall also.”

As the Run N Gun season comes to a close with the regular school basketball season starting, there is no indication the team is slowing down as Sloan continues the cycle of finding female athletes and teaching them something new.

But he will never forget his old crew. He will always contact his former team members, continuing that familiar bond long after the end of the sports seasons.

“I think that’s one thing I really pride myself on in my team, is that once you’re done with my team, it’s not really ‘alright, bye, see you later,’” he said. “No, we keep our relationship going. Even though I have at least three players that are four years out from playing with me, we still keep close contact today. I’m hoping it will be the same thing with all my past players, even currently now as they start to graduate and move on later in life.”

For past players, Run N Gun still means something to them, or more specifically, what the team helped give them, such as Slender, who Sloan helped heal following her father’s loss so many years ago.

“Coach Sloan was one of the first people I was able to talk to about it and helped me get through it,” Slender said. “And so I feel like just this characterizes how much family matters to him. It is very important and I think that’s my big takeaway is that he loves basketball, but he loves family more, and he loves the concept of family.

“And that is exactly what Run N Gun is,” she said. “It’s a very big family because I feel like it offers you a family when you don’t have a family, and that’s what I absolutely loved about Run N Gun – it’s another family that I could call anytime I needed something.”

Johnson, who has already begun getting invitations from colleges to play for them, also recognizes Sloan as a significant influence on her and the whole team.

“He really interacts with the girls and helps them, and he really knows how to coach, which makes him different from the other coaches, and he just like a good person overall,” Johnson said.

For Sloan, coaching is more than just teaching kids how to play sports and can mean so much more.

“As a coach, what have I done for you when you left the team? Have you become a better person overall and then a better player as your skills are really sharpened?” he said.

“I think that one of my biggest things right there is that when you move off of my team, I hope you become a better person and a better player rather than just OK, we’re just going to play in the tournament, and then that’s it,” he said. “But a lot of it is of teaching a lot of things in the game of basketball and that relates a lot to life too.”