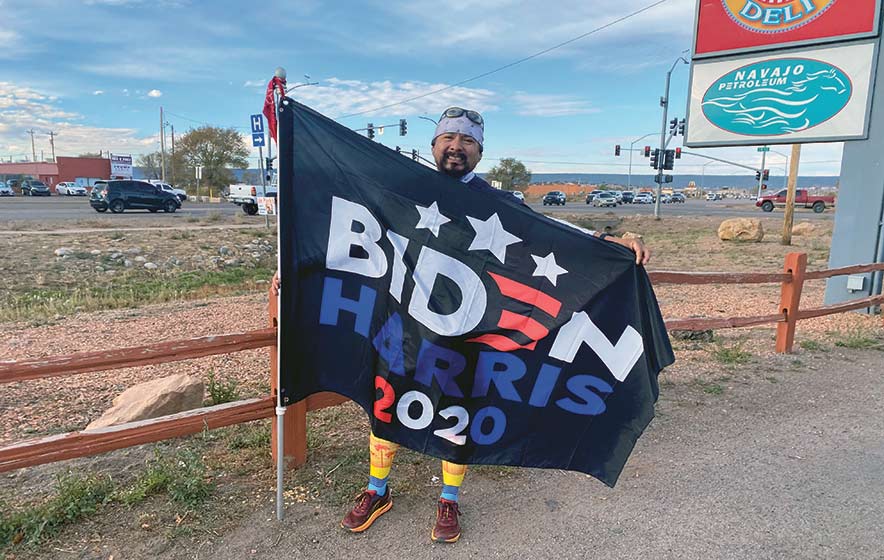 Edlin Bain is worried for his Diné elders when it comes to COVID-19, so he decided to run along Highway 264 while carrying a Joe Biden and Kamala Harris flag.

At first it started with him wearing a blue Biden and Harris shirt, but then he added the matching flag. He’s been running for nearly three weeks leading up to Election Day. His support for Biden and Harris comes down to what they can do eradicate the potentially deadly virus that has claimed the lives of 584 Diné as of Tuesday.

“It’s a bad message to tell people you don’t need to be wearing a mask,” said an emotional Bain. “For them they might not worry about it, but for us Diné, we worry about our elders.”

Since the beginning of the pandemic in March, the Trump administration has downplayed COVID-19 and its severity, even after Trump and members of his family tested positive. While the Navajo Nation has some of the strictest health mandates in the country, such as wearing masks, most of the country and the surrounding states and cities are somewhat lax when it comes to mask wearing.

“Minorities are the most susceptible to this,” said Bain. “Family members are passing away. This message needs to change and this person (Biden) is going to be the one changing that message.”

What also worries Bain about another Trump presidency is the continuation of his environmental rollbacks. According to the New York Times, Trump has officially reversed, revoked, or otherwise rolled back 70 environmental rules and regulations, with another 26 rollbacks in progress. These rollbacks, which have been carried out by the Environmental Protection Agency, impact the limiting on planet-warming carbon dioxide emissions from power plants and from cars and trucks; removed protections from more than half the nation’s wetlands; and withdrawn the legal justification for restricting mercury emissions from power plants.

At the same time, the Interior Department has worked to open up more land for oil and gas leasing by limiting wildlife protections and weakening environmental requirements for projects. “On top of that, all these things that are being reversed,” said Bain. “The protection of animals such as bears, wolves. The protection for all these natural beings, its being stripped away so people can take advantage. For us we respect nature. We respect Mother Earth.”

Bain isn’t the only person who has been running and showing their support for Biden and Harris. As a member of a running group, he said another friend is also running while carrying a flag, which Bain gave him, for the Democratic nominee.

The palpable divisiveness that is seen throughout the country when it comes to Trump supporters and anti-Trump people is evident even on the Navajo Nation. So it’s not surprising that Bain has received some negative feedback from those who don’t share his views or agree with what he is doing, but supporters outnumber the adversaries.

“I’ve gotten a lot of thumbs down,” said Bain. “I’ve gotten people yelling out their window and saying ‘Go Home!’ “I can count on my hands how many times that has happened,” he said. “But the number of times I’ve gotten support, I can’t count that. I know there are going to be people out there with their own views.”