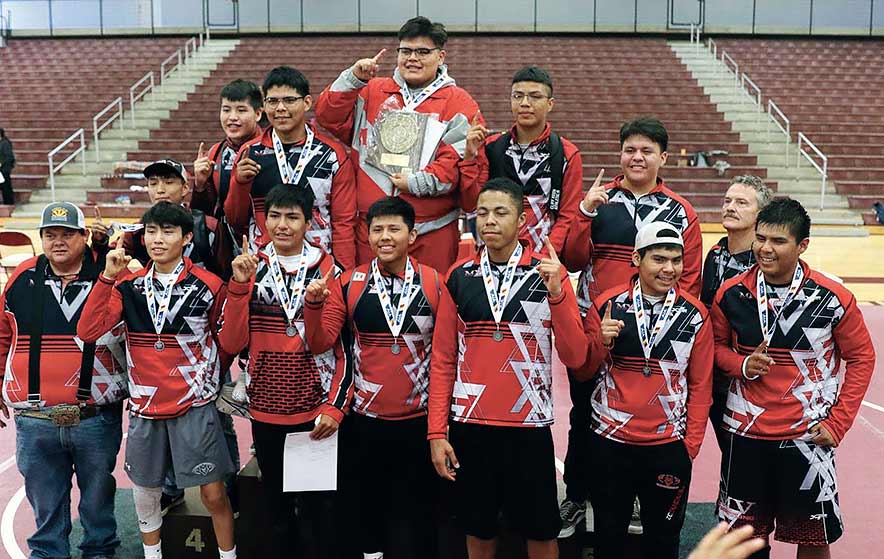 Special to the Times | Eugene R. Begay
The Monument Valley Mustangs captured the team title at the Arizona Division IV, Section IV tournament with a team score of 196 points. The MV squad qualified 13 wrestlers for state, which starts on Friday in Prescott Valley, Arizona.

Thanks to a top finish at the Division IV Sectional IV Wrestling Tournament, the Monument Valley Mustang wrestling team is headed to the state wrestling tournament with 13 qualifiers.

With their win in the sectionals, the three Mustangs were guaranteed a top four seed at state, which will be held at the Findlay Toyota Center in Prescott Valley, Arizona this weekend.

That doesn’t guarantee them any medals, as they have to work their way into the medal rounds.

“We’re peaking at right time. We’ve been wresting pretty good,” Monument Valley coach Clyde McBride said. “We always want to peak, we want to be at your best come sectionals, at state.”

“Smallcanyon is having himself a good season,” McBride said. “He wrestled all season and he’s won.”

Smallcanyon took the top prize after beating Shorty at the sectional tournament. He also won the Pat Kenny Invite and the Peabody Classic. The two-time state qualifier will be making his third appearance at state as the No. 4 seed in his weight class.

Tuni pinned Scarbrough in 3:14, as the freshman is seeded No. 3 for the state tournament, which is going to be his first appearance.

“He’s amazing. The kid’s got tons of talent,” McBride said. “He’s trying to perfect what he like to do.”

Gilmore, the team’s biggest man, started the season at 330 pounds, his coach said. Since regulations require him to wrestle at 285, he lost 50 pounds to stay qualified. The senior wrestler is seeded No. 3 for state and he’s going in with a 17-2 record.

McBride attributed the success of the team to his assistant Harvey Starbuck and two wrestling programs called Rez Wrestling and Sheep Camp Wrestling.

‘You’re only as good as your coaching staff,” he said. “He’s (Starbuck) the one that developed our team into who it is.”

McBride said they are going down to “battle tough.”

“We are planning to showing up to state to wrestle. We’re going to wrestle the best we can and see some medal winners out of it,” he said.