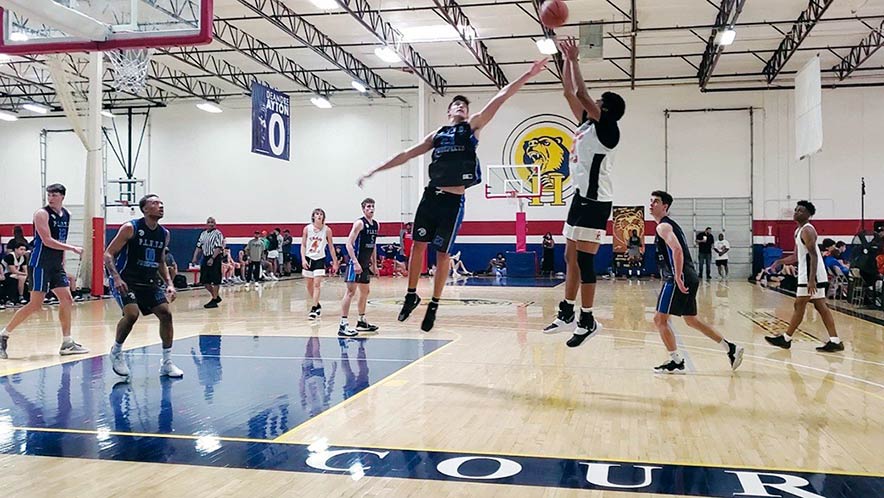 Submitted
Khari Dunn Jr. moved from Dallas to be closer to his family, who lives in White River on the Fort Apache Reservation. Dunn, who is proud of his heritage, shares his culture with others, giving them new perspective on what it means to be a modern Native American.

Khari Dunn Jr. is just 17 years old, but he is already set to graduate from Williams Field High next week.

Originally from Dallas, Dunn had moved to Gilbert to be closer to his family, who lives in White River on the Fort Apache Reservation. 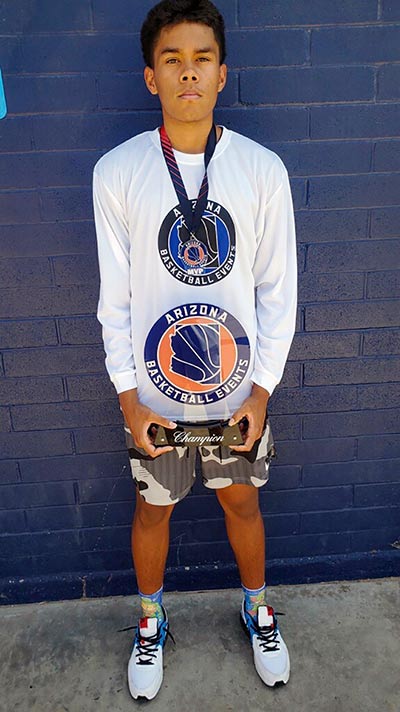 Submitted
Khari Dunn Jr. is set to graduate a year early at Williams Field High School in Gilbert, Arizona. The talented forward is weighing his options as he plans to play basketball at the collegiate level.

Being the new kid in school who skipped a grade wasn’t easy, but Dunn found a way to cope through the sport of basketball. That distraction turned into true passion and he is a forward player for both his school and club teams.

Dunn has always been an active person, even from a young age. He played sports such as soccer, baseball and tag football for a while, but for him, none of them compares to basketball. There is an excitement to the game whenever he gets on the court and he can hear people cheering him on.

“It taught me a lot,” Dunn said. “It taught me to never back down from a challenge and to always stick up for myself.”

Since then, he has played the game whenever possible. When the school season was over, he would be playing in clubs — something his father, Khari Dunn Sr., says had a positive effect on his son.

“He was more of a limited role while in high school,” Dunn Sr. said. “These clubs allow him to be more versatile and spread his wings and show what he can do because he always had the potential and always had the ability to do it … The club teams have brought that out. For other athletes it may be vice versa, but for him the club teams are what helped him to evolve as a player.”

One such group was the Team Rondae Hollis-Jefferson Basketball Club, an AAU program in south Phoenix, coached and directed by Erik Hood. Hood is also uncle of the club’s namesake, Rondae Hollis-Jefferson, who played for the University of Arizona before going into the NBA. Hood won recognition and honors in past years for his dedication to helping athletic youths in the Phoenix area.

Hood didn’t know Dunn until they played against him one day and Hood saw his skills on the court.

“It was just the way he moved; his athleticism, his demeanor on the court, the way he shot the ball, rebounded; he just seemed like an overall good player with good sides and I was intrigued,” he said.

Hood would have loved to have him on his team, but thought it would have been wrong to try to take a player from another team. Surprisingly, Dunn was the one who approached him and asked to join Hood’s team.

“He just said he wanted to play against some of the top competition in the country. We afforded him that opportunity and that was pretty much the reason why he wanted to play with us,” Hood said. “He has size, strength, skill set, motor — he’s just an all-around good player. Good student. And a good young man. Character matters.”

Another thing that stands out about Dunn is his pride in his heritage. He is half African-American and half White Mountain Apache and he shows that pride whenever he can. Whether at school or on the teams, he’d share his culture with others, giving new perspective on what it means to be a modern Native American.

He had been bullied in the past, but he remained strong and diligent in both his academics and athletics. His dad believes basketball played a role in that.

“I think one of the most dominating impacts is it [basketball] allowed him to persevere through adversity,” Dunn Sr. said. “He experienced a lot of adversity when he started out and all the way through high school, just a lot of negative feedback, but he kept playing, kept showing up. … He’s still working to get better so he didn’t let the negativity that was going his way pull him out of loving the game.”

Dunn is very close to his family and learned much of his Native culture from relatives in White River. His great-uncle was the late Ronnie Lupe, the youngest chairman for his tribe, who would be a figure for Native progress during the late 20th Century. Former Navajo President Peterson Zah recognized many of Lupe’s achievements when he passed in 2019. “He won major cases and established precedent for Indian Country,” Zah said.

Recently, Dunn lost his grandfather. It was a tough loss but he endured and honors his family by learning and sharing their traditions.

“My parents always taught me to never forget where you come from,” Dunn said. “Always acknowledge that you’re Native and African American. My parents have done a good job of always making sure we remember and know what happened in regards to our heritage … It means being humble and being a family person, and with that being said, it’s mainly about being humble.”

Many people who know Dunn would agree that his culture and heritage has become a part of who he is.

“To me he has a lot of qualities of his grandfather,” Dunn Sr. said. “The calmness — he doesn’t get rattled, you never know when he gets angry, he’s humble. … (He) is very quiet and mellow, you really won’t hear him give an outburst at all, he’ll just put his head down and play. His culture of being half White Mountain Apache translated well into who he is and who he will continue to be from here on out.”

This past year, though, many things have changed. The COVID-19 pandemic had canceled games and school, two things that Dunn greatly enjoyed.

“When the pandemic hit, I wasn’t able to hang out with my friends or do most things this past year,” Dunn said. “We’re not doing anything now, trying to move around that and just be happy with what I’ve got, ’cause when you have family that’s all you need.”

Coach Hood was anxious for Dunn and the other seniors on his club team as he feared the pandemic would limit their exposure to college scouts.

Despite the chaos caused by the pandemic, Dunn tries to play every chance he gets. His most recent tournament was The Prep Hoops Hustle in the Sun held this past weekend. Before that he played at a tournament in Tucson where he would be named MVP. Interestingly, Dunn would also be one of just two players who played all four years of high school basketball at his school.

Dunn plans to go to college and get his degree in electrical engineering. It would be a dream come true for him if he gets the opportunity to play college basketball. He’s received five partial scholarship offers with a total of eight offers to play for an institution so far. While still in high school he also took some college level classes and already earned 15 college credits. Dunn is still searching for the right school that would fit for him.

Dunn Sr. is very proud of his son and feels that he taught him as much as a father can, and Dunn Jr. can teach others important lessons as well.

“He’s a very good example of putting your head down and taking all of the beatings people will give verbally and all of the letdowns that people throw your way, and to keep loving what you love to do and trying your best to get better at what your goal is, which in this case is to be an MBA player,” he said. “Despite everything he had experienced, he is still pushing towards that goal and I really respect him for that.”

Coach Hood is also proud of Dunn, but he’s also proud that Dunn is sharing his heritage and teaching others, him included, what it means to be a Native player.

“I want the community to support him and embrace him and not just him but all athletes who are Native, especially here in Arizona where they don’t get as much recognition as they should and after high school their careers are over,” Hood said. “Khari is good enough where it won’t happen to him, but maybe if his story gets out there, he can inspire the next kid that is coming up who thinks he’s underrated, under-recruited, not recruited enough, no one is looking at him, maybe (he) inspires the next great Native basketball player or inspire Natives to play in general.”

Dunn never let anything get in his way and he is determined to reach his goal of getting his engineering degree and playing basketball while doing it.