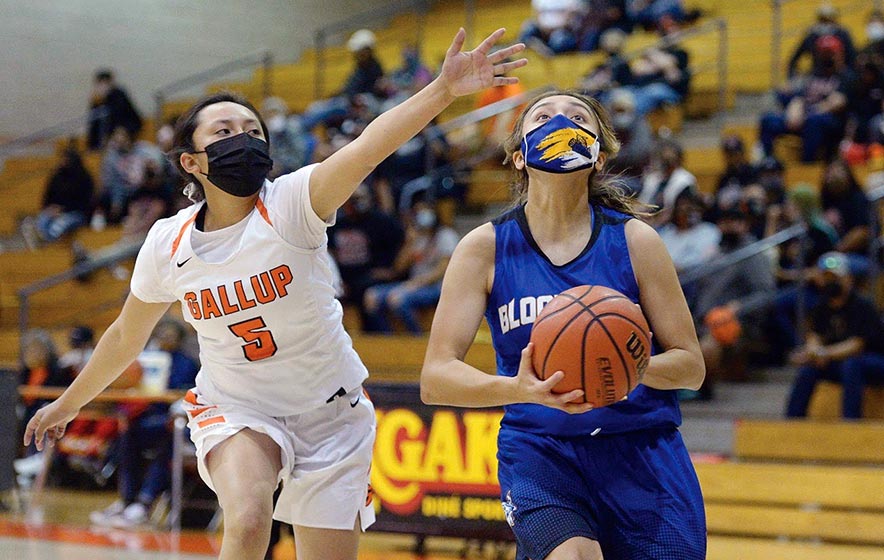 The Bloomfield Lady Bobcats are looking to end the season on a high note after experiencing some tough challenges in this shortened prep basketball season.

The girls’ program at Bloomfield High was put on pause following its game with Aztec on April 13 due to COVID-19 concerns.

“It’s been a difficult year,” longtime Bloomfield coach Tom Adair said. “It definitely hasn’t gone the way we expected. We’ve had 10 days off because of quarantine, so we haven’t had any practice or played any games.”

Adair said when they played Aztec two weeks ago, someone showed up at the game that had tested positive for the virus. As a result, both programs had to shut down.

“They shouldn’t have been there,” he said. “It wasn’t any of the players or coaches so for 10 days we weren’t allowed to do anything.”

The Lady Bobcats returned to action on Saturday and that layoff was pretty evident as they had a slow start against Gallup.

Bloomfield trailed 26-6 at the end of the first quarter before losing 81-46.

“For some reason our first quarters have been horrible,” Adair said. “We gotta get better on defense and offense in the first quarter. That’s for dang sure because we dug ourselves in a huge hole tonight.”

In the final three quarters, Gallup outscored Bloomfield 55 to 44 but the Bobcats won the second by a 14-13 margin.

“I’m just proud of my girls,” Adair said. “We didn’t play as good as we’re capable of playing but I expect them to show up and go to work.”

Due to the layoff, Bloomfield will forgo two district games, as they will only play Miyamura and Kirtland Central once this season.

And come Saturday, the Bobcats would have played six games in eight days as they are trying to make up for the lost time due to the 10-day quarantine.

“It puts us in a very difficult situation,” Adair said this past Saturday. “We’ll play five games in a row.”

On Tuesday, Bloomfield played Gallup again and this time the score was a little closer as the Bengals won 69-48.

The Bobcats will conclude the regular season with Miyamura at home today, at Kirtland Central on Friday and they will host Aztec on Saturday.

With six seniors on the squad, Adair said he like to finish out the season for them.

“My seniors have been awesome and they’ve been with me since they were seventh graders,” he said. “Five of the six have been with me and one transferred from a small school on the reservation.

“I have great seniors who have been great leaders,” he said. “It’s just a very difficult situation. We haven’t played up to our potential and they’ve done everything that’s been asked of us.”