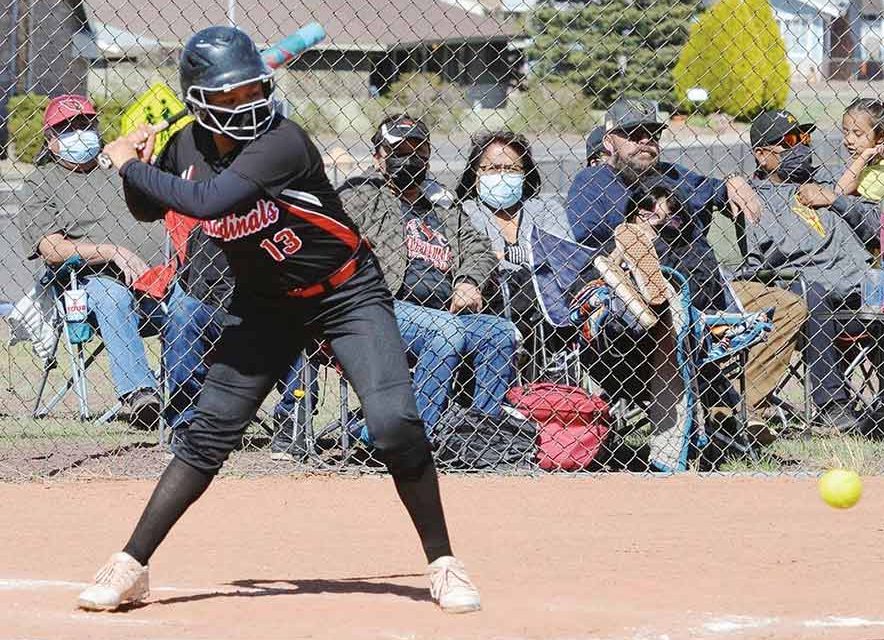 Submitted St. Michael outfielder Jalin Perry eyes the ball in a 1A North contest earlier this year. The Lady Cardinals advanced into the second round of the Arizona Interscholastic Association 1A state playoffs.

Last Friday the St. Michael softball team played a double header in Williams. Both games were close with the Vikings winning 7-4 in the first game and 10-6 in the second.

“It was intense and exciting,” said Cardinals coach Karen Tom. “Definitely the competition we were looking for.”

The Cardinals were able to score two runs in the first inning before being outpaced by Williams in the second inning.

The pitchers from the teams put up a hard fight as they struck out players and made it difficult for batters to get a solid swing.

In the first game they were tied at 3-3, then 4-4 until Williams broke the mold in the fifth inning when they hit a homerun and brought two players home, making it 7-4.

The score remained unchanged throughout the sixth and seventh innings.

The next game was just as close as the first.

Cardinals’ third baseman Sunshine Burnside hit two homeruns – one in the first with an RBI and the next in the third inning – increasing the Cardinal’s morale as they chanted and cheered one another on.

“It felt good,” Burnside said when asked about hitting two homeruns. “It’s really nice especially being in my senior year and leaving my mark on the field.”

Simpson would also hit a homerun during the fifth inning with an RBI.

During the fourth inning, freshman catcher Autumn Shirley also stood out as she caught a flyball before throwing to first base and getting the runner on first base out.

The game proceeded at a steady pace. However in the final inning St. Michael gave up six runs and Williams gained the lead.

During the inning, Shirley prevented Williams from scoring one more run by tagging the runner out at home plate. She then caught a foul ball and threw it to second base where the third Viking was tagged and ended the frame with Williams ahead 10-5.

The Cardinals tried to make up but it was too little, too late. Kalynn Smith hit a single and got on base. She made her way around to third base by her teammates hitting singles, then was brought home by Simpson who hit the ball to left field and brought the score to 10-6.

However, that was as far as St. Michael got when their last batter hit the ball to centerfield and was tagged out at first base. This ended the game as the two teams tipped their hats to one another.

Williams is currently ranked No. 5 in the Arizona 1A statewide polls with St. Michaels right behind at No. 6.

Regardless of the loss though, coach Tom is still optimistic about the team.

“I’m very proud of my team,” Tom said. “They worked really hard through the season even though it was a short one, we had to deal with a lot of restrictions with practice, not having a home field, having some players injured, but we worked hard and we came back.

“We still had some good wins, some really good plays and even though we lost today,” she said. “I can still see that we’re still on track for state.”

Burnside also thought it was an overall good experience.

“It’s been pretty fun,” she said. “I’m very blessed to have a season, especially on the Navajo Nation … I’d say that we are going to come back from this game.”