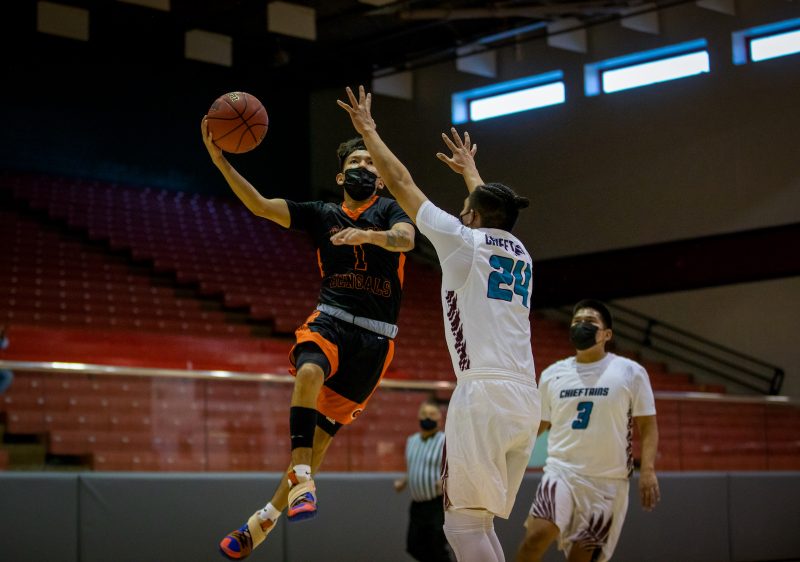 Navajo Times | Sharon Chischilly
Gallup senior Quentin Richards (1) drives to the basket against Shiprock’s Javon Thomas (24) in the first half Friday night at Shiprock High School. Gallup defeated the Chieftains 83-67 to improve 4-1 overall and 3-2 in District 1-4A play.

A day after scoring 94 points, the Gallup boys’ basketball team was back at it on Friday night.

The Bengals had 10 players score including five in double figures as Gallup defeated Shiprock 83-67 without fans inside the Chieftain Pit as San Juan County remains at yellow level in the state’s color-coded COVID-19 restrictions system.

Counties at green and turquoise are allowed to house fans at certain capacities while counties coded yellow and red can’t.

Nonetheless, the Bengals created their own energy as they were on pace to hit the century mark, leading 51-38 at the break.

“We’re always trying to get better, and tonight we had a good start,” Gallup post Brad Lynch said. “We had our foot on the gas pedal, and we tried to not to let off.”

The senior big man scored six, but he had plenty of help as Gallup’s other post, Kody Touchine, had a team-best 15 points. Junior Kohanon Atazhoon added 14 while Quentin Richards and Jeffrey Yazzie chipped in 11 followed by Joaquin Ortega’s 10.

“We’re definitely a good offensive team but we’re trying to balance it with defense,” Richards said. “We want to be a better defensive team than we are at offense and that’s going to take some time, but I know we’ll get there.”

The 16-point win improved Gallup’s record to 4-1 overall, including 3-1 in District 1-4A play. The Bengals only loss came at the hands of district leader Kirtland Central (6-0) as the Broncos edged Gallup 60-56 on April 9.

That loss was a hard pill to swallow for the Gallup team as they were the favorites to win the league crown as some early season predictions placed them as high as No. 2 statewide among 4A teams.

“These kids know we were back-to-back district champs but that’s in the past,” Gallup coach Joshua Dunlap said. “Every one of our district opponents is giving us their best, which we want so we have to rise to the occasion.

“I think it’s a little different when you’re the hunted, instead of the hunter,” he added. “Maybe that’s why I get really intense because I still think we’re in last place. That’s how I approach every game.”

With their overall depth, Dunlap believes his team can go a long way, but he says there are some things they can improve with the state playoffs are a couple of weeks away.

“I think our starting five could be one of the top ones in the state,” he said. “We’re also trying to get some of the younger guys to be a star in their roles, and if they can support the starting five, I think we can do good things.”

And for them to get a chance to showcase their talents in the state playoffs, Dunlap said they need a strong finish in the final two weeks of the regular season.

As for the district’s automatic bid to state, the Gallup coach said they need to avenge their loss to Kirtland Central as that key matchup is scheduled for Thursday at Gallup High.

“We need to beat them by four or more,” he said of KC. “As long as they don’t lose, and we don’t lose then that game will determine the district champion.”

In Friday night’s game, Dunlap said they wanted to zero in on Shannon Dale as the Shiprock senior finished with 16 points before he fouled out in the middle of the third quarter.

“Shiprock always gives us a good run and I thought their best player got to his spots,” he said. “We have to really improve on that because No. 32 (Dale) was getting into the lane anytime he wanted.”

“After we lost Dale things kind of went south,” he said. “But it might have been a good thing too because it allows our other players to step up and develop them as we go down the road here. We have two weeks left with six games and I’m hoping for a little bit of a change.”

In addition to Dale, senior guard Demittrius Young had a productive outing, scoring 20 points while Javon Thomas added a dozen.

Nonetheless, Gallup’s overall depth and talent was too much to overcome.

“They’re a good ball club and you have to give them that,” Atcitty said. “They play very well, and they shoot very well. They love to run and gun and, of course, they scored 93 points the other night.

“They had a good plan coming and, you know, we had some good shot selections but there were some championship shots that we missed in there to where we could have kept it closer,” he added. “It’s just the pace of the game that Gallup draws you into and you kind of get suckered into it.”