‘In better shape than any team’

Patience pays off for Thoreau Hawks 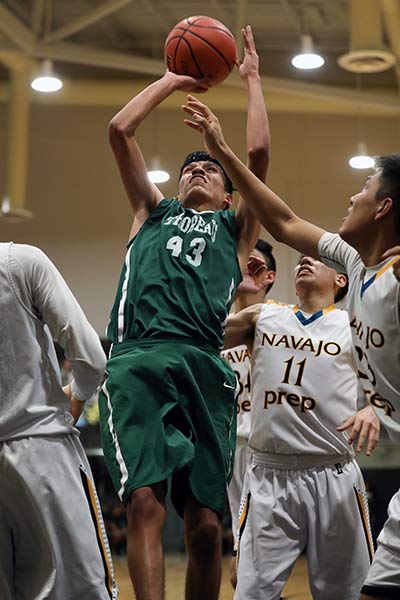 Thoreau’s Donovan Saunders puts up a shot against Navajo Prep defenders in the third quarter of the District 1-3A championship game on Saturday, March 2, at the Eagles Nest in Farmington.

It was difficult for a team that liked to run-and-gun. But since November, they’ve been waiting patiently for that moment when their practice would pay off.

The moment came at last in the district season and district tournament and the Hawks won the District 1-3A tournament championship, 48-45, over Navajo Prep last Saturday.

Thoreau coach Andrew Gordon said it was a moment his team had looked forward to.

“The boys are learning,” he said. “We’ve been trying to be very patient. And we work them hard, we run them hard, we never let them lay off. We are in better shape than any team.”

Thoreau started off the game against Navajo Prep with a quick 5-0 lead, which set the pace for the entire first half.

The two teams played tight defense and found trouble getting their shots off. After one quarter, the Hawks led 10-5.

Navajo Prep continued to struggle offensively in the second quarter, chipping at Thoreau’s lead while the Hawks continued to extend it.

Navajo Prep coach Rick Hoerner said he had one sick player and two others injured, which hindered them to an extent. He said it didn’t help that they had trouble on offense.

“We were a little undermanned today,” he said. “Lance (Morris) got pneumonia. When teams play us zone (defense) he’s our guy, and we didn’t do a very good job adjusting to that.

“Both our bigs are down, we can’t get the ball in the basket,” he said. “Thomas (Montanez III) is going to miss layups like that every game, it just happens.”

In the second half, Thoreau came out recharged and ready to continue dominating on offense.

With their backs against the wall, Navajo Prep came charging back in the fourth quarter tying the game up 41-41 with two minutes left.

Thoreau gained some leverage with a five-point play. They left the Eagles chipping at the score with little time left on the clock. Thoreau closed with the 48-45 win.

Hoerner said the loss was similar to some tough offensive games they have had earlier in the season.

He said the team knew that Thoreau could and would play tough.

“I thought we had plenty of opportunities,” he said. “In fact, we played good enough defense to win the game. We had this happen to us three or four times.

“I told coach Gordon, ‘I don’t want to play you guys, I’m more afraid of you guys than any other team,’” he said. “They were hot. I thought that was just the toughest team for us to have to run into and that’s the way it worked out.”